The Priory of the Orange Tree by Samantha Shannon

I just looked for this one online: 17 people are waiting per Kindle copy at my library! Just put a hold on it, but that’s a crazy long wait.

Oh dear, that’s probably why my daughter wanted me to read it.

Trying something different. The Ghost of Marlow House by Bobbi Holmes.

Ok I am really liking this. The ghost is more funny than creepy. I feel like there are a few plot holes, but hubby says I’m overthinking. Anyway, it’s a ghost story so I can probably just suspend my disbelief.

It’s the start of a series with 29 books (so far). A few are Christmas themed which is why they showed up in my search.

I might read a few more. I needed something goofy to get my mind off my anxious thoughts.

I needed something goofy to get my mind off my anxious thoughts.

This is the boat I’m in. Something not depressing that I don’t have to think too hard about.

Agency by William Gibson. (sequel to the Peripheral)
Can’t stand it–
Too many boring action details.
Too many characters, including too many randomly shoved in from the previous book.
Way too little character development and interesting observation.

The best part is a sort of AI genie, comparable to “the moon is a harsh mistress”, which is also shoved in, but we can all agree is fun anyway.

Yeah, it was super popular the past couple of years.

I’ve since read books 6-10 and am halfway through book 11. I bought the rest of the series in advance.

I also finished Player Piano a few days ago. It was fine, but not as good as Slaughterhouse Five.

It’s also really long, so no one is returning it early. In fact, I just bought it, so i can read other library books. And because i expect to want to reread it.

So, if you’re interested in taking a break from books and reading a short story, my flash fiction piece The Wish Artist was published this weekend. I’m really proud of this one, as it came out almost fully formed on the first draft.

Reading the second in the “Haunting Danielle” series: The Ghost Who Loved Diamonds.

Can’t get into the cheesy holiday romance books this year. Although I have been listening to Jan Karon’s Shepherds Abiding on nights when I can’t sleep. It’s as soothing as an old quilt & I love John McDonough’s narration.

My only problem with it was I thought it would have made a better book 1 of a trilogy than a complete book, ha.

Now reading The Second Generation (Dragonlance series). It’s not good. But it’s part of the chronological series so I’m blowing through it.

I’m about 1/3 of the way through The Dragonbone Chair (book 1 of Tad Williams’ Memory, Sorrow, and Throne trilogy).

I’m going to start up Mort (book 4 of Discworld) next. Also, Little, Big by John Crowley will be after these are done. 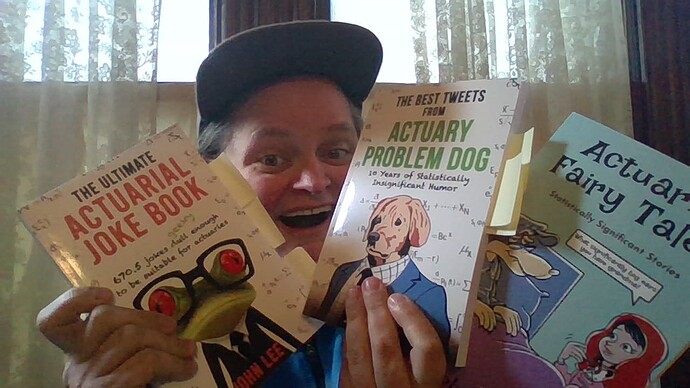 I dunno. I just finished it, and i think the first book would have been confusing, and the last book predictable. But as one volume, i like it a lot.

She’s working on a prequel.

I’ve moved on to the Golden Enclaves. And then I’ll catch up on Alanna.

haven’t read a lot of Shakespeare, and i don’t want them all

leaving out R&J, what would be your top 3? 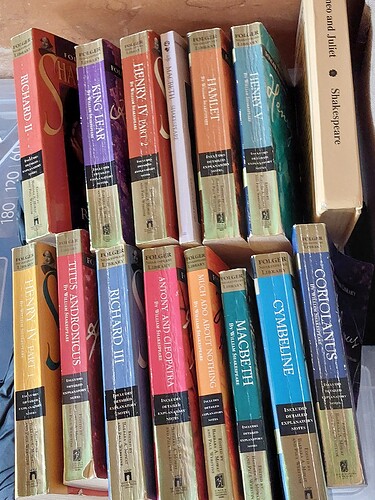 Though I don’t think either is in that photo.

From the photo, maybe MacBeth or Hamlet

I liked the ones about the Danish prince and the Scottish king the best. I have donated all my own paperbacks and many hardcover ones because of limited shelf space.

I’m pretty sure these were the ones they forced us to read in HS (along with R&J). It’s kind of a greatest hits, as almost all of his most famous bits are from those two (imo).

for Shakespeare, my top 3 would be Twelfth Night, King Lear, and Much Ado About Nothing

in school, R&J, Othello and Taming Of The Shrew, Julius Caesar. Possibly Hamlet

i have seen so many movies, i lose track how i know the stories.