Dude I just purchased this Craftsman socket that came with some kind of anti theft tag on it and it was a real pain in the ass to remove. I looked up the problem and people were saying you gotta use side cutters to remove it.

But I don’t have side cutters and the only reason why I’d buy one is to remove the tag. And I bet the side cutters are enclosed in some stupid package you can’t remove without a tool.

I say Craftsman in cahoots with Craftsman to get you to buy more tools from Craftsman!

You’re just now figuring this out?

You have an excuse to buy more tools… and you’re complaining?

I always thought tools were bought by handymen but when I ventured out to the country side there was this gigantic store that had tools in it that regular people bought so it seems like there’s actually a market for them for people who don’t use tools for a living.

Even the socket purchase was dubious it’s only because I need to tighten one bolt on something so I probably should have just hired the maintenance guy who lives in my building and paid him 5 bucks.

there’s actually a market for them for people who don’t use tools for a living.

In the Po’, tools are a status symbol.

Not so much in terms of quantity, but how often your neighbor borrows their tool from you.

If it’s what I’m thinking of, you could stick a screwdriver in there all the way up to the handle, then just start twisting. I may take quite a few twists, but it will break eventually.

So I gotta buy a screwdriver now? Shame on you Craftsman, shame!

Key works, too, but it is way way more difficult.

In the Po’, tools are a status symbol.

All my stuff is Dewalt cordless BTW. Not flexing, I just have nice stuff.

My wife got me a cordless DeWalt kit. 10/10. Most of my corded stuff is DeWalt as well. I just want tools that work.

Well, I even have DeWalt tool bags to keep my DeWalt tools in. Except my DeWalt lawn mower which is too big for a tool bag.

Again, not flexin, just sayin’, I know the neighbours be checkin’ me out when I’m cutting the lawn.

The bags are nice, though I prefer my Mac tool box for storage. 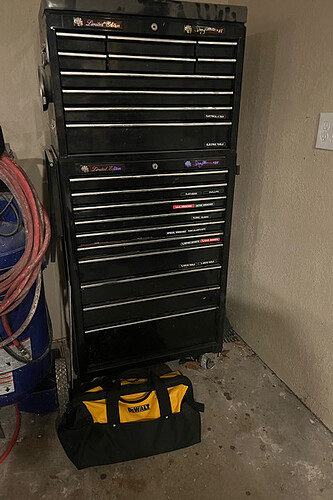 That’s nice!
I just keep them on shelves in my garden sheds. I had to build a second shed though because one wasn’t enough to Hold all my tools.

I gotta admit though, your compressor is a lot bigger than mine. I’ve just got like a couple gallon one. Been thinking I should get a bigger one and mount it in the garage.

All my stuff is Dewalt cordless BTW

But aren’t all hammers cordless?

use a ktichen knife, or a chinese cleaver