What were they going to do, admit it??

whoops, you got us, stayed tuned for future events’ easter eggs!!

It must be wonderfully comforting to be that selectively credulous.

If you don’t work in or around insurance, you’ve probably never thought about the concept of reinsurance. It would still be pretty witless to say “nobody” has heard of reinsurance.

Oh goodie, a semantics debate! We haven’t seen one of these yet since the death AO Political, I don’t think!

Calling it a semantics debate is a great way to avoid engaging, good on you.

But hey, I guess being incredulous is KIND of a counterargument. Hope that works out for you. Peace.

If you want to enable White Supremacy that’s on you.

I’m curious - did you even open the links and read the stories?

Now you’ve done it. Be ready to get called a white supremacist by like 5 different posters.

For the record, my original intent wasn’t to engage Adriana, but just to point out, for any more honest posters lurking, something they said that was stupid but could fool some people.

I’ll stop now. I proven to my own satisfaction, and to any discerning readers, that they’re not worth the effort.

Just some food for thought. Norse symbols are often used by white supremacist groups worldwide. Our friend Jake Angelli, better known as the QAnon Shamen has tattoos of many Norse symbols on his body including the Othala Rune which is a base of the Odel Rune. It is ironically a rune signifying connection to a native land. Ironic given no white people are native to the US.

US Capitol riot: the myths behind the tattoos worn by 'QAnon shaman' Jake Angeli

What did all those weird tattoos mean?

Here is an article from 2017 in The Atlantic discussing the practice of white supremacists using Norse runes. 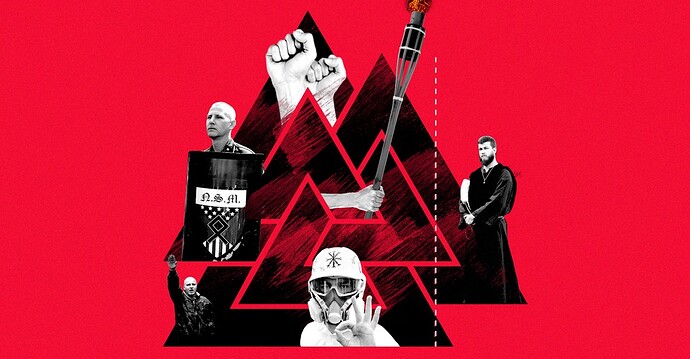 What To Do When Racists Try To Hijack Your Religion

White supremacists are coopting Norse heathen symbols. Should the heathens ignore them? Protest them? Create a new theology?

The lesson here is that just because you’re not a white supremacist and you don’t know these things doesn’t mean they aren’t true. White Supremacist are very good at dog whistling each other. You also may be a conservative in your political beliefs and not want to believe your party has embraced this ideology to lock up their base, but they have. The Republican party has decided they can win elections in rural America by opposing abortion, fighting for gun rights, and dog whistling to white supremacists.

I am watching because I voted for Biden but also voted for our Republican representative. If Trump is running the election of 2022 behind the scenes I will not be voting for any Republican candidates at all. I would rather vote against the majority of my political beliefs than support white supremacy.

Not all Republicans are disgusting, but those who ignore that Trumpism has given credibility and enabled white nationalism and feels no need for the messaging to change need to have some serious self reflections on why they feel that way.

I would think that Nazis have a good chance of knowing their own symbols. It’s definitely not made for the public, or even your run-of-the-mill racist. If there was an Easter egg, then it was made by a Nazi for Nazis. I still think it could be a coincidence, but I don’t think it’s crazy. Nazis love their symbols.

Also, I didn’t know this-- but it’s not obscure. If you google National Socialist Rally you’ll see about as many Odal Runes as Swastikas. They put them on their shields and flags now.

I wouldn’t call it an Easter egg that implies intent. Design choice is not always a conscious choice. Like in poetry, the poet turns a phrase in a way that feels right without fully analyzing all the cultural or societal meanings the phrase could have. This is one small aspect of how art taps into a broader truth. The shape felt appropriate by the designers and those within cpac that approved the design even if they did not know why it felt appropriate.

Our trappings are like a tell in poker they indicate our intent without us knowing it.

Yeah, I can see how that happened. They designed a stage with a symbol subliminally in their heads, and you know what, darn it, the stage just happened to come out looking like that symbol that somehow got implanted in their heads. A very logical possibility.

Anyway, nazis or not, CPAC demonstrated that Trump is still an object of worship, and that his Big Lie against US democracy is still in vogue.

In a way, the insurrectionists were not extreme at all. They are just the only ones who took the lie seriously.