It is real. There is video of people there (mostly unmasked) taking pictures of it. Some generous people thought it could be a Sasha Baron Cohen prank or similar. No evidence of such, yet.

They seem to really like those graven images of confederate generals…

Graven images of dead people seem different. And the Christian church has held for centuries that graven images are okay for reasons.

“The Christian church” as you’re using it here is confusing to me. As a Christian, what my church is ok with is very different from what another denomination is ok with. I don’t view the Pope as any religious authority, for example.

The early Christians decided graven images are okay before the schism. At the time of the schism, the eastern church held that only flat images were okay, and that sculptures were not okay for worship. The Catholic church obviously encourages its members to use actual sculptures of saints as a worship aid.

I suppose iconoclastic movements have sprung up from time to time in the Christian tradition. The Eastern Church even has a holiday celebrating the saint who restored the use of icons. And some of the Protestant traditions discourage the use of images to one degree or another. But even then, it’s mostly a concern with the worship of images, not the creation of images, graven or otherwise.

So I’m not claiming that no Christian church anywhere rejects the erection of statues of famous people in general. But that’s a fringe concern within Christianity as a whole. I wouldn’t expect self-identified Christians, a priori, to have a religious objection to confederate statues. That doesn’t mean no Christian would object on religious grounds. But it’s not at all surprising to me that “[Fundamentalist Christians] seem to really like those graven images of confederate generals”

Yeah - all of that is true. That’s why your average Christian won’t give a second thought to a golden Trump statue.

My post was mostly just funnin’. The situation reminded me of a time over the summer when the whole “monument” thing was going strong where I heard someone say “well, maybe we should tear down all of the statues of Mohamed”. Ok - have fun finding one… Muslims tend to actually pay attenton to that particular commandment.

Thanks for the context. I agree with a lot of the history as you’ve laid it out. Churches have a history of trying to determine what they believe the spirit of the law is, rather than just the letter of it. So many denominations are ok with tattoos and allowing women to speak in the church (some are not, it varies) but virtually none are ok with worshiping an idol - in theory.

In the churches I’ve been a member of, the closest thing to a graven image would be the image of the cross, and pictures of (white) Jesus. But because none of these is prayed to, exalted, or held as anything except symbols of the purpose of our faith, they are not considered to be graven images. I can see how others would disagree. But we believe that our heart, not only our outward actions, are what will be judged, so we take some cover in that.

As Trump has nothing to do with the Christian faith, I consider a golden image of him to be incredibly ironic, as the Israelites were punished for making a golden calf in Moses’s absence on Mt. Sinai. Now the GOP has made not only a golden calf, but a golden torso and golden head, too (sorry, can’t help the dad jokes). And a lot of fundies are all over that.

I will say, a lot of people who were never religious before have started aligning themselves with the evangelical church in the last few years. People like my in-laws, who couldn’t tell you the first thing about Christianity. And a lot of Christians like myself have left the evangelical church as a result of all of this. So, while we as a church certainly own this and need to examine why we are the movement being used for hatred and alt-right ideologies, some of us (not nearly enough) see this for what it is.

I think the Christian question has been: can we venerate a person without adoring/worshipping them, with images playing an important role in the veneration/possible adoration. The Roman Catholic answer had mostly been yes, it is ok to venerate images of saints. Some other groups have been more cautious.

But I don’t think the question has been: can we make images of people or animals at all? I think that has been the question Islam and maybe Judaism has wrestled with.

So the Christian concern is arguably whether we are worshipping the golden statue of trump, say. But I don’t think many Christians wonder whether it is OK to make a sculpture of Trump at all. I think that, at least historically, this may be closer to the question asked by Islam and Judaism.

A disgusting House Republican is trying to mock the stimulus relief being proposed. Only Fox seems to be mentioning it, no sign of it on CNN. 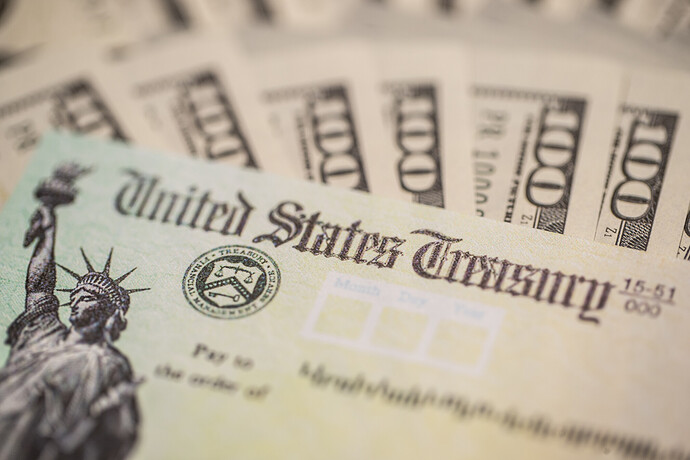 I saw an interview with the creator at CPAC. He said it was made with stainless steel coated in (something resembling gold, can’t remember) and it was for sale for $100,000.

Next, he plans to make another one “that will really piss off the liberals” cast of gold-plated bronze that he expects to auction off for around $10,000,000. Lol.

“that will really piss off the liberals”

This is the GOP platform. Nothing more, nothing less.

Meanwhile liberals are somewhere between a chuckle and a cocked-head, “Are you… okay?”

I will say, a lot of people who were never religious before have started aligning themselves with the evangelical church in the last few years. People like my in-laws, who couldn’t tell you the first thing about Christianity. And a lot of Christians like myself have left the evangelical church as a result of all of this. So, while we as a church certainly own this and need to examine why we are the movement being used for hatred and alt-right ideologies, some of us (not nearly enough) see this for what it is.

I heart all of what you said and that was a killer dad joke as well. I agree with this sentiment here too. While there were certainly Trump voters in my church there were only 2 or 3 people who I would consider Trumpkins. But that’s true for a lot of groups I assume. Seeing someone climb the Capitol steps during the riot on January 6th with a Jesus Saves sign was a particularly sad moment for me on a sad day for our country.

Hahaha, these people never learn their lesson regarding the bold.

From the article below:

“Listen it’s a free country. Anybody can form a federal PAC or a super PAC and there’s always lots of competition for dollars. But the crossing the line there is then to also tell people to not give to the important committees of the national party,” said Palatucci. “There’s got to be a willingness on the former president to look beyond his own self-interest.” 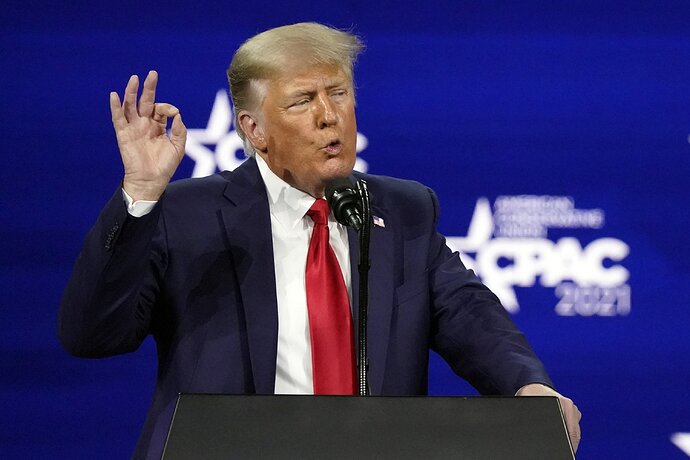 ORLANDO, Fla. (AP) — “Trump needs you,” one fundraising email implored. “President Trump’s Legacy is in your hands," another pleaded. Others advertised “Miss Me Yet?” T-shirts...

I hope that Trumpkins only give to DJT; that man doesn’t know how to share, or listen to anyone who isn’t telling him what he wants to hear.

The CPAC stage is a giant Odal Rune, and more specifically the one with wings used by the SS.

Yes, just saw that as well. I keep getting ninja’d.

I don’t see how anyone here wouldn’t think a gathering of a bunch of Republicans isn’t really a bunch of Nazis in disguise.

Design Foundry said it ‘had no idea’ that the stage resembled a Nazi symbol, ‘nor was there any intention to create something that did.’

huh, who knew? The CPAC stage wasn’t designed to look like an emblem used by Nazis. That was all just a conspiracy theory based on complete and utter nonsense.

Swastika could have been even better for social distancing right, but the stupid libs will stir up controversy over that too

Moderators, if you feel like interjecting your opinions again to disagree with me, feel free to let me know.

I would much rather cpac have secretly made a nazi stage than what actually happened.

Instead they celebrated a man who used neo nazis to attempt a violent overthrow of our government to install himself as president.

And also celebrated the lie that made that violent coup attack possible.

A lie that, if true, implies that our government, courts and media are so fundamentally broken that truth and security can only come from this same man.

Given that there was a big cold-colored bust of Trump for this thing, I have every reason to believe what you described really happened. I didn’t follow any of it at all because I think partisan events like this and political conventions are all shitshows and wastes of everyone’s time.

But for a bunch of ostensibly intelligent people on here to fall for the stage nonsense was hilarious. I told one of my friends about this, and she was like “What the hell, do people seriously think they would try to insert an Easter egg symbol that no one has even heard of into that thing?”

I also thought it was a little crazy when everyone said trump was sending coded messages to these neo nazi groups so they would be his storm troopers when he needed them. But then it happened.

i think it’s understandable if people are feeling a little paranoid right now. i know while i didn’t think the stage thing was intentional, i was a lot less confident than i would have been 3 months ago.

also it’s not just the golden trump statue. he spoke there. and evidently many speakers repeated the lie about the stolen election. not every speaker. but the ones who did got big cheers.

I stand by my statements. “Purposeful” may be too strong a word but in design you match the imagery with your client. According to Design Foundry’s statement they did not say “let’s pick a Nazi symbol design,” okay. They did answer the question, what design best fits our client? If you are confused by this take a look at Design Foundry’s portfolio and note how the design matches the client and the event. Work - Design Foundry