Well, ew. At least they included consent, I guess? But I struggle to understand these “rules.”

I struggle to understand these “rules.”

Some things are better left a mystery.

As near as I can tell, they’re attributing a decline in what they see as masculinity in society to p*rn additiction, and therefore they want single men to get off the couch and interact more with single women, while non-single men are supposed to get out from behind their computers and into bed with their significant others.

Yep, gotta keep mom barefoot and pregnant in the kitchen where she belongs popping out babies to counter the great replacement theory.

Well, ew. At least they included consent, I guess? But I struggle to understand these “rules.”

\textcolor{red}{\text{Would any Republican advocate any sex without consent?}}

The NYT looks at the splintering of local Republican committees (should be a non-paywalled link): 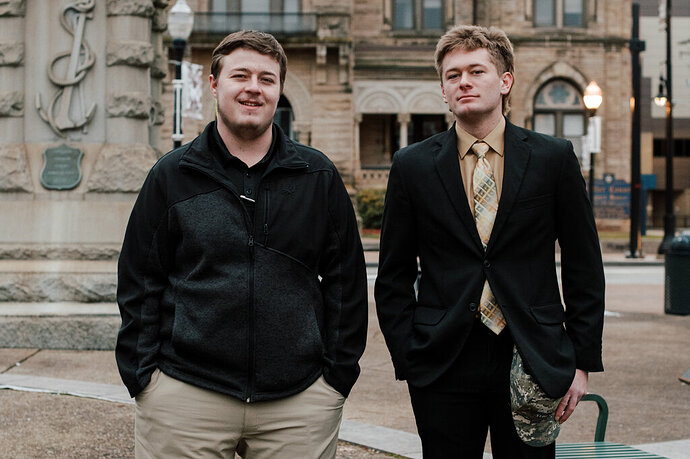 Will the Real G.O.P. Please Stand Up? A National Power Struggle Goes Local.

In one deep-red pocket of rural Pennsylvania, three warring factions each claim to represent the Republican Party. Tensions boiled over in a scuffle over a booth at a farm show.

Matters came to a head in August, when members of the old and new guards tussled over the committee’s booth at the Butler Farm Show, prompting the event’s head of security to intervene — an episode that, mortifyingly for the Republican activists, took place in view of the county Democrats’ own booth.

I just caught up on the Tucker Carlson M&Ms thing. That dude has some weird sexual fetishes.

It is so funny thay M&Ms is trolling him/fox news to create hype for their super bowl commercial.
And news stations and papers are reporting on it like it is a legit story.

It is so funny thay M&Ms is trolling him/fox news to create hype for their super bowl commercial.
And news stations and papers are reporting on it like it is a legit story

Even a person at MSNBC dot com is thinking “what a dumb idea”:

Opinion | M&Ms vs. Tucker Carlson is a fight nobody wins

The stunt hiring of Maya Rudolph as spokesperson probably isn't going to be the laugh riot — or sales boost — Mars, Inc. imagines.

Does M&M know what kind of people watch football, even?
So, cue Carlson stage left in the SB commercial, cuz everyone trolling.

barefoot and pregnant in the kitchen

When I first heard that expression almost 50 years ago I was struck by how much it said in just a few words. Had not heard it uttered for a while but it still resonates.

From my Yahoo news feed (originally from HuffPost)

Sen. Ted Cruz (R-Texas) on Tuesday called for the FBI to investigate Joe Biden’s son over classified documents found at the president’s Delaware home and then, seconds later, suggested it was no big deal that sensitive documents were also found at former Vice President Mike Pence’s home in Indiana.

“The FBI needs to search the University of Delaware archives, and they need to search Hunter Biden’s home and business address,” Cruz said during an appearance on Fox Business Network’s “Kudlow.”

Host Larry Kudlow then asked him about the classified documents discovered at Pence’s home near Indianapolis last week. Cruz didn’t seem as concerned about those.

“Oh, look, the Mike Pence story ― it’s still early,” Cruz said. “He is a good friend and a good man. He’s explained where these came from.”

This was also in my Yahoo news feed, but with link to the original since there’s more commentary than I’m including: George Santos Admits 500K Personal Loan to Campaign Wasn’t ‘Personal’

Late Tuesday afternoon, Santos’ political operation filed a flurry of amended campaign finance reports, telling the feds, among other things, that a $500,000 loan he gave to his campaign didn’t, in fact, come from his personal funds as he’d previously claimed.

However, while the newly amended filing told us where the funds did not come from, it also raised a new question—where did the money come from?

While both the old and new campaign filings claim that the loans came “from the candidate,” the campaign’s most recent amended filing had ticked the box for “personal funds of the candidate”; on the newly amended filing today, that box is unchecked.

Another amended filing on Tuesday disclosed that a $125,000 “loan from the candidate” in late October also did not come from his “personal funds,” but like the $500,000 question, did not say where the money came from, when the loan was due, or what entity, if any, backed the money.

Guess who’s back in the news for lying? No paywall at this link. 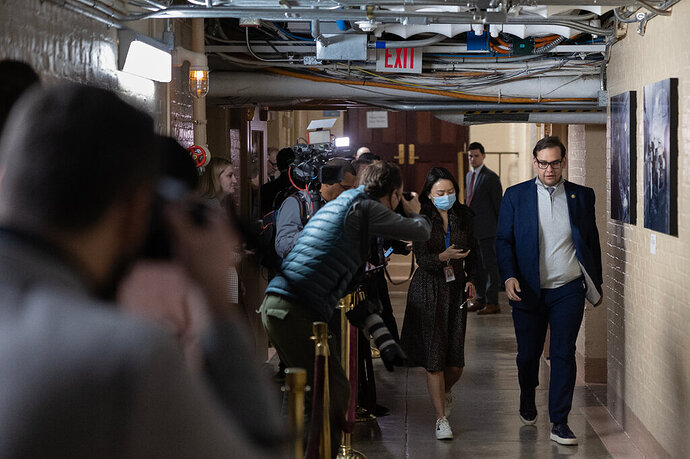 How an Investor Lost $625,000 and His Faith in George Santos

Andrew Intrater, a wealthy businessman, has been in touch with the S.E.C. about Mr. Santos’s dealings on behalf of a company accused in a Ponzi scheme. 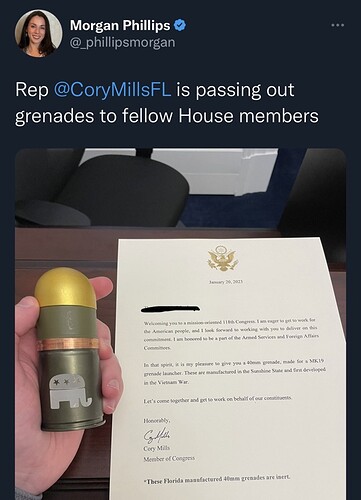 Surprisingly, I don’t find that too offensive. On the plus side, they are made in his state and he said these were inert. (Explosive ones would be awful, but specifically saying these were inert is better than being silent on that.)

Also much better that is was military weaponry rather than weaponry available to civilians for killing civilians.

Yeah it’s a little weird, but not too awful. 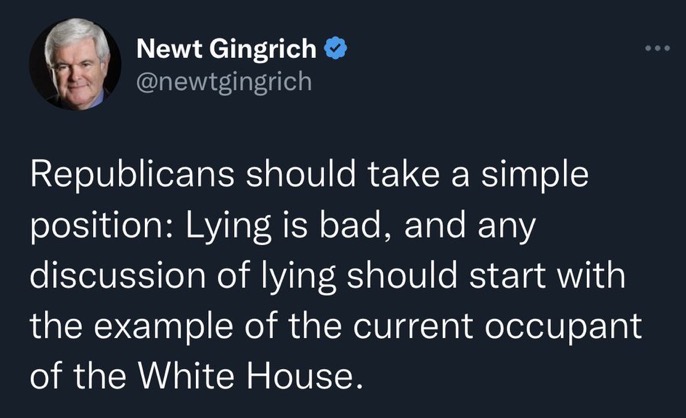 Please tell me this tweet was from 2-6 years ago…

Unbelievable. Did you cut off another paragraph “Then proceed to the Republicans in the Senate and Trump’s nominees to the Supreme Court, and proceed to eject George Santos from the House”?

While both the old and new campaign filings claim that the loans came “from the candidate,” the campaign’s most recent amended filing had ticked the box for “personal funds of the candidate”; on the newly amended filing today, that box is unchecked.

To summarize this newest scandal. Anyone feel free to clarify if I have the details slightly wrong.

He originally verified that the funds came “from the candidate”, and his fiduciary at the time seemingly agreed.

He later “replaced” his fiduciary with somebody who never agreed to the position, and (IIRC) on the same day re-filed his FEC reports without the knowledge of the “new” “fiduciary”, then blamed it on him.

There was also something I heard on the radio - campaigns need to report expenditures of over $200, and Santos has had something like 19 $199.99 expenditures at the same restaurant.