Then a reporter can ask Joe what flavor of ice cream he had and Trump can whine about it.

Who, exactly, is going to invite Biden to the WH for a tour??

I find it hilarious that the same administration that is blocking the typical transitioning process is somehow going to extend an invitation to Biden for a WH tour. LOL

In theory, Melania. I’m not saying that it definitely will happen. I’m saying that if it does happen it will be Melania hosting, rather than both the POTUS and First Lady, which is what’s typical.

The Bidens will need to know where the In-White-House McDonald’s is. Wasn’t there four years ago.

BTW, Harris’ husband (Doug Emhoff) will have the title “Second Gentleman”. Which I guess is the male equivalent of “Second Lady”, but it just sounds sort of odd. “Second Lady” is a little odd in the first place.

Given that he’s been fairly absent in the campaign and doesn’t have the same last name as Harris, I foresee myself forgetting his name several dozen times in the future.

she might give the tour. this isn’t all that important and makes her look good.

yeah, maybe not. this is the least important factor in the transition though.

Agree that it’s not particularly important, and even less so with the Bidens than with another couple. It’s just one of 8 gazillion examples of Trump not respecting the office that he holds. But I mean, if I was going to be moving for the next 4 years, it would be nice to see the place one more time when I had more of an eye for stuff like “hmmm, that’s not going to be enough closet space, so I’ll have to use the bedroom down the hall as overflow” and “I think the TV would look better on that wall” than I had when I was just a visitor in the house.

Perhaps time to remove gender from the title.

I foresee myself forgetting his name several dozen times in the future.

I don’t think I could name the spouse of any VP in my lifetime (or before my lifetime, probably), except GHWB, but only because he was later President.

I guess I might have known Jill Biden (but maybe that’s just from the current presidential race). On a good day I would have known Tipper Gore. The only others I would really have had much of a chance with are the spouses of VPs who later became Pres.

Until your post, I had never heard Pence’s wife’s name.

On a good day I would have known Tipper Gore

If you’re old enough to remember the “satanic panic” scam perpetrated on America by evangelicals in the 80’s, you might know Tipper Gore’s name pretty well from that.

We had this book in my house when I was a kid, and I read it cover to cover many times…though doubtless not for the reasons Ms. Gore intended for it to be read: 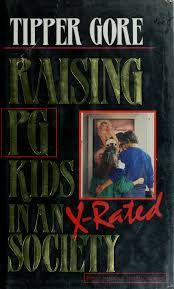 Honestly, I get Tipper Gore confused with Tipp O’Neal. Ultimately, I don’t really know anything about either of them* except that their names are similar.

*Gore, because there’s really no real reason for me to know anything about her, and O’Neal because all the stuff about him was from before I paid attention to much of anything.

Perhaps time to remove gender from the title.

I assume that if Hillary Clinton had won four years ago, Bill Clinton would have been First Gentleman. Doesn’t seem especially sexist.

Even works for same sex couples.

She also led an anti-First-Amendment Crusade against foul language in Music. Won’t somebody think of the children?? 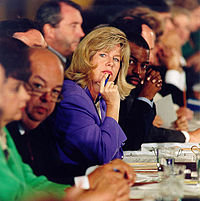 The Parents Music Resource Center (PMRC) was an American committee formed in 1985 with the stated goal of increasing parental control over the access of children to music deemed to have violent, drug-related or sexual themes via labeling albums with Parental Advisory stickers. The committee was founded by four women known as the "Washington Wives" – a reference to their husbands' connections with government in the Washington, D.C. area. The women who founded the PMRC are Tipper Gore, wife of S...

She also led an anti-First-Amendment Crusade against foul language in Music. Won’t somebody think of the children??

Yes, a big chunk of the book I pictured above was just the dirtiest rock lyrics she could find, and a lot of handwringing about how evil they were. Ironically, 8-year-old me learned a lot about sex just from reading this handy compendium of all the song lyrics she wanted to keep away from me.

As I remember it all she wanted was a rating system (G, PG, PG13, R, X) like in movies so parents knew what their kids were listening to.

All I can tell you is, get a copy of that book and read it, then come back and tell me if that’s really all she wanted.

I can say this - puritanical attitudes about sex are a big part of what fucks this country up the ass (oh, goodness - pardon my language!), and anybody that contributes to that as full-throatedly (again, forgive my salacious phrasing!) as Tipper Gore is doing something terrible in my opinion, yes. Ratings on albums is not terrible, merely because it is so stupid. But her Tali-Baptist propaganda campaign extended far beyond just that.

As I remember it all she wanted was a rating system (G, PG, PG13, R, X) like in movies so parents knew what their kids were listening to.

I honestly don’t recall what she was pushing for, but yeah, I don’t think a rating system that informs is terrible. Anti-first-Amendment would be actually banning the music altogether. I do recall that as a result of her group’s efforts they started putting the Parental Advisory / Explicit Lyrics label on some tapes / CDs.

I also recall that at one point you couldn’t buy George Michael’s album “Faith” where I lived because of the song “I Want Your Sex” (extremely tame compared to music lyrics that came out a year or two later, but shocking at the time). So when my Aunt took me shopping at Harvard Square and said I could pick out an album and she’d buy it for me, that was what I picked out. With a name like “Faith” and him wearing a cross earring in the photo on the album cover, she thought she was buying me Christian rock and was quite pleased. I did not disavow her of that notion.

If this president refuses to accept defeat and IF, this Supreme Court, without any evidence of fraud, backs him. Is there any recourse, other than a coup?

I think you have it backward. The things you describe Trump doing is already a coup.

Doesn’t a coup require the military or violence of some kind?

I was probably assuming Trump would need the military on his side to make it happen. If he’s legitimately removed by the military I think there is a different word for it.