House of the Dragon (no spoilers)

They seemed to be getting pretty familiar in the Hunting episode too when she went off him in the woods, but no quite like the tear-away-armor episode last night.

Based on the “inside the episode”, he couldn’t start and there was no actual “coupling”. Rhaenyra technically wasn’t lying in response to the King’s and Queen’s lines of questioning.

Rhaenyra technically wasn’t lying in response to the King’s and Queen’s lines of questioning.

Then she goes and breaks her maidenhood anyway, and now has to explain that when it is revealed. She does ride horses, though. Any maester should know about that.

She does ride horses

She rides a freaking DRAGON!

{and that’s not a euphemism}

Vow for no wife doesn’t mean vow of celibacy.

I always thought the state of celibacy was never marrying and chastity was never engaging in sex.

I should cross post this in learn something new but I’m too lazy. I always assumed they were the same but you are correct.

Celibacy is the state of voluntarily being unmarried, or both, usually for religious reasons. It is often in association with the role of a religious official or devotee.

In its narrow sense, the term celibacy is applied only to those for whom the unmarried state is the result of a sacred vow of renunciation, or religious conviction.

In a wider sense, it is commonly understood to only mean abstinence from sexual activity.

I use the narrow sense and use “chastity” as choosing not to have sex.

Read the entire wiki article for some interpretations on all this.

idk, I can appreciate it. “Always two sides to a story” kind of thing

Such a slow moving episode. Still mystified at what brought on the climactic scene.

That jackass shared his secret.

Too many jackasses shared their secrets, actually.

Man, this dying king is taking forever to die.

Many men (not all, not most) when they catch feelings that are not reciprocated cannot express those feelings in any way other than anger and violence. That seems to be what happened here.

He was upset that he was only offered a lifetime knight and friends with benefits status with a princess.

many men would love a lifelong fwb 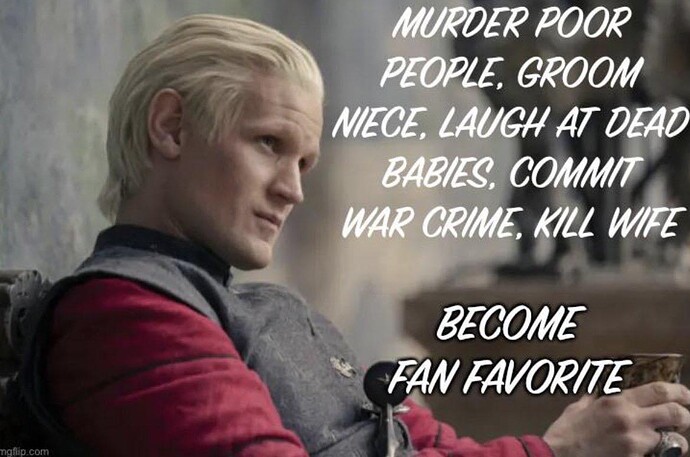 I’m not a huge fan of the extreme time advancement and cast changes. It’s hard to pinpoint exactly why I feel that way, but I do. Also that seemed like kind of a boring episode. I’m really hoping the next part of the season draws me back.

I didn’t think this one was boring. I thought quite a bit happened.

Aside from the swapping of 5 important characters’ actors (Rhaenyra, Alicent, Leanor & Leana, and Aegon). Aegon turns out to be a twerp (sort of like the GoT’s 1st season Viserys?). Aemon is the often-punked little bro, and Rhaenyra’s boys are good kids or twerps too? Yet to be decided

(Now I sort of understand the choice to cast Corlys as a different race - it makes it easier to distinguish that his supposed grandsons aren’t really his grandsons) Those 3 apparently are sired by Ser Harwin. I thought the scene with the boys’ combat training was very well done, and I liked how Harwin ended up pummelling Ser Cole. I was wondering if Ser Cole was the reigning ace of hand to hand combat, as he had bested Daemon, and dominated that Ser Joffrey sidepiece. But Harwin laid him to waste.

Larys shows how evil he can be by killing his bro and dad, just to move himself up politically with Queen Alicent. Rhaenyra needs to get out of dodge, as she sees troubles (storms) on the horizon.

I would like a little more explanation about why some of them have dragons and some don’t. They each get an egg, but sometimes the eggs don’t hatch? How do they hatch, other than by personally walking them into your husband’s funeral pyre?

I recall during last night’s episode someone saying 50% of the eggs don’t hatch at all.

Yeah I don’t remember the percentage but they said some nontrivial portion don’t hatch. I wonder if the percentage has been going up since the fall of old Valaria as there don’t seem to be a lot dragons floating around even now in this season.

This has more to do with the shows budget

I don’t want to lookup non-show info but from the show it seems like there are about 8-10 paired dragon/riders that we met and when the pig boy (unpaired kid) went into the dragon pit looked like there might be a few other non paired dragons but I don’t know how many, another 8-10? And it seems you can either pair from birth or pair up later from the some as that seemed to be discussed more than once. Maybe there are other dragons floating around the 7 kingdoms but I got the feeling from the earlier episodes they were limited to Targaryen and Valarian houses and 20 dragons seems like it might be tops. Although we saw what 3 dragons (later 2) could do in the GOT series so I guess that is a lot.