Plumbing is done on my bathroom, 100%. More on that next week.

While the plumbers were here, I had them swap out the kitchen faucet. The old one was absolute garbage. Couldn’t modulate the temp, and it was fussy about turning off, it liked to drip. New one isn’t too fancy (Kohler) but it… you know, works properly. Nice win.

I assume the old one couldn’t be fixed with a simple valve replacement? Or maybe just wasnt worth it?

I think it was a $59 unit to begin with, I’m not even sure what brand it was, it didn’t have a label anywhere I could see. 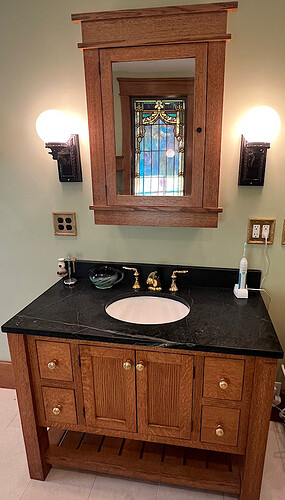 I’m annoyed. The electrician decided he needed to add a second box for all the new circuits. But now i have to pull out the recycling bin to open it. If he’d mounted the thing 2 inches higher, i would’ve have this issue.

If you zoom in on my last pic and squint you can see an outlet down low, which is for the bidet seat thing. My electrician knew we were installing 8” baseboards but mounted that 6” high. By the time I realized it, my carpenter was already making those, and I just told him to notch the baseboard for it. If he’d mounted the thing 2 inches higher, I wouldn’t have this issue!

Last pic for a while, we got my wife’s antique vanity thing moved in. Circa 1880-1890 as best I can tell. She saw it and fell in love and said she was buying it for the room, perfect. If she decides later she wants a more modern thing with a sink, there is hot/cold water and a drain behind the wall so it’s easy. 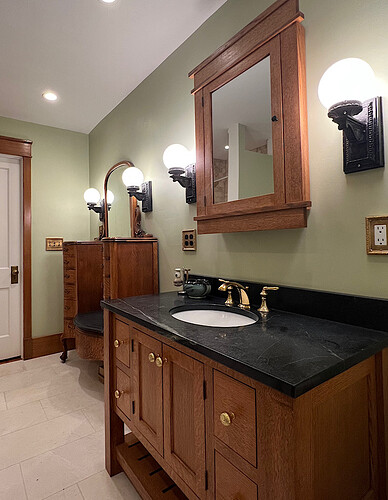 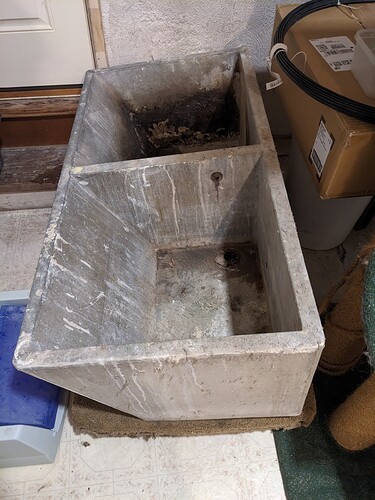 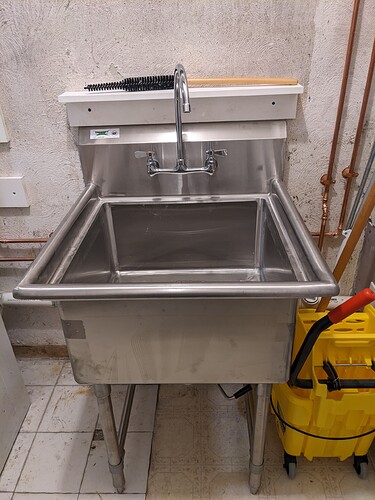 Nice, but now you have to keep the new one clean and shiny!

I need get something similar to replace the junk thing i bought for my basement utility room over a decade ago.

That old sink is a freaking beast. Make a planter out of it! New one looks great and it looks like it’ll last. I’m jealous, we want a sink like that in the basement but it’s not gonna be a priority any time soon.

I feel bad about having the old one smashed to bits, but it’s too freaking heavy. I don’t really want a planter that i can’t move. (Especially since there isn’t any obvious place to put it.) Two big guys wrestled to get it on a dolly, and they each complained to me later about how heavy it is.

Funny thing: when i moved in, i looked at it and said, “that’s a concrete sink”. I’ve had a string of contractors assure me that it was soapstone. But now that they’ve taken the fittings off it, they see metal reinforcements in it. Damn thing is reinforced concrete, made to look like soapstone, which was still popular at the time, but probably gotten pricy.

I’m still having the soapstone table put in. It will be useful to have that staging area, and it’s pretty.

I ran an empty load in the washer, to check that it was working again (the redid all the plumbing down there) and the thing walked when it was spinning. Anyone know how to balance a washing machine?

now you have to keep the new one clean and shiny!

It’s just a utility sink in the basement. I plan to use it for fun tasks like cleaning litter boxes. I mean, it was designed to be a commercial food prep sink, and is certified for that use. But that isn’t what’s we’re going to do with it.

Grab a level, and start turning the feet on the machine til.everything is level.

Our first house had a sink like that, just concrete. Mustve been popular at the time. I didnt know that it was intended to look like soapstone.

As for keeping it clean lol, thats my job here. Scrub the crap out of it til its like new about twice a year. But ours gets used for everything from rinsing paint brushes to cleaning wild game.

Interesting that everyone is doing this here. My spouse has kind of said ok to replace our laundry sink which is lplastic builders model. Except then i want to start tearing things apart a d putting them back together properly.

I ran an empty load in the washer, to check that it was working again (the redid all the plumbing down there) and the thing walked when it was spinning. Anyone know how to balance a washing machine?

When mine walks, it’s because the load isn’t balanced, all of the garments or whatever are crammed on one side and that’s what causes the shimmy. The feet on the bottom of the washer should screw in and out to level it. Set a level on top of the machine and start fiddling with those.

The plumbing looks very tidy, by the way. My plumbers haven’t been quite that neat. Kind of surprised to see copper, most residential has moved to Pex (I have). Maybe you requested copper. Looks like you got Pro Press fittings and they anchored it to the wall, and it’s all nice and parallel. Which is great if you have OCD, and I might.

I requested copper for water that comes into the house. (Also, the general contractor is old, and tends to request it.) Copper is mildly toxic, which means that even if you don’t use a pipe for a while, it’s less likely that nasty things will grow in it. They’ve replaced a lot of the drains and some of the heating system with pex and something white for the big drains (replaced old cast iron pipe in terrible shape.)

Nice. The white drains are almost certainly PVC. It’s about 90% cheaper than doing cast iron and holds up pretty well.

Cast iron is cool because you don’t hear water draining, whereas PVC you do hear it. But I’m not paying for cast iron just so my drains are 10dB quieter.

If I’d known how f***ing noisy the PVC is, I might have paid for it in the main drain that runs from my bedroom to the basement. That pipe sits next to my kitch table (in a wall) and whenever someone runs water anywhere in the house, we hear it. It’s better now that we have a new (quieter) water meter, but it’s still really annoying. But in the laundry room I’m perfectly happy with this stuff, so long as it works and holds up.

I feel bad about having the old one smashed to bits, but it’s too freaking heavy.

In fact, it’s SO heavy that I don’t think it CAN be removed without smashing it into smaller parts. The contractor says that lifting the thing is a 4 man job, and there isn’t room for 4 men. I have no idea how they got it in there. It’s concrete, so maybe they made it in-place.

Maybe I will ask about doing one vertical section of cast iron when we re-do the main stack next year. As I understand it, much of the expense is labor, because it’s heavy and you have to be very precise with fittings because it doesn’t flex much.

So maybe if I just do the vertical bit with cast iron, and then transition to PVC in the basement it might work. The plumbing down there feeds into the mechanical room so noise is fine. That room has rock wool in all of the walls to dampen the sound.