The pandemic seems over from what i can tell. Sure some people cling to their masks going to be the last remaining covid virgin, but life is pretty much back to normal.

Is it even a health emergency? What should we hutty up and do to address it?

We have a small declining % of the population unvaccinated and have never had covid that are still high risk. We have a frail and elderly population that may go a few months early because covid is a nasty bug that can rival the flu even for those who already protected.

Those things aren’t changing no matter what we do… so why argue it is still a pandemic?

I consider full hospitals to be the barometer.
That’s not happening at this moment, so good for now.

"I don’t know what he meant

Right. He either 1) didn’t listen (so not knowing what he meant is on him and why is he even commenting?) or 2) he listened and understood what Biden meant, but is intentionally faking ignorance so he doesn’t get associated with the media furor over the statement.

Biden’s lack of support from his own party on what should really be an easy-to-defend statement is the deeper story here. The party is tired of apologizing for him.

he will have to admit hes not running in the coming months, Rs likely take the house and turn it into full clown show. Dems gearing up for the next phase of the political cycle at this point.

Biden’s lack of support from his own party on what should really be an easy-to-defend statement is the deeper story here. The party is tired of apologizing for him.

I agree with the first sentence. I disagree with the second sentence. An easy-to-defend statement should not require an apology. But they are as aware as you that the should-be easy-to-defend statement is not easy-to-defend. The fact that you’re going on and on about it when you know the context and the meaning is proof of that. The media (especially Fox, of course) and the Rs will do the same. The furor will continue (tan suit-like) whether reasonably defended or not.

Are they weasels for trying to dissociate themselves from a nothingburger? Of course!

I’d say Ds criticizing their own president is typical behavior, that we also momentarily forgot about during the horrible trump years.

The fact that you’re going on and on about it when you know the context and the meaning is proof of that.

I was aware of the context from the start. I pointed out it was misleading and another example of Biden talking being a political inconvenience to his own party. Don’t equate with me with the idiots over at fox news.

Biden forgot a congresswoman had passed away and looked for her during a speech. Honest mistake and just a low grade gaffe, imo.

The darndest thing is the WH press sec came out and pretty much said it wasnt a mistake and Its normal is look for people in a crowd that have recently died that you are thinking about.

I know she was trying to dodge follow up questions about Biden’s mental state, but WH response was pretty poor on this one.

Not really news, but we dont get much to post here.

the WH press sec came out and pretty much said it wasnt a mistake and Its normal is look for people in a crowd that have recently died that you are thinking about.

Yeah, her response was pretty weaselly. Offhand I’m not sure what a better one would be, given the circumstances and I sure as hell wouldn’t want her job (under any POTUS).

I personally would rather they just own up to the fact that he momentarily forgot her death but I can see that politically that’s probably not the right thing to say to the White House press corps either.

Here’s a link with a video of her response. 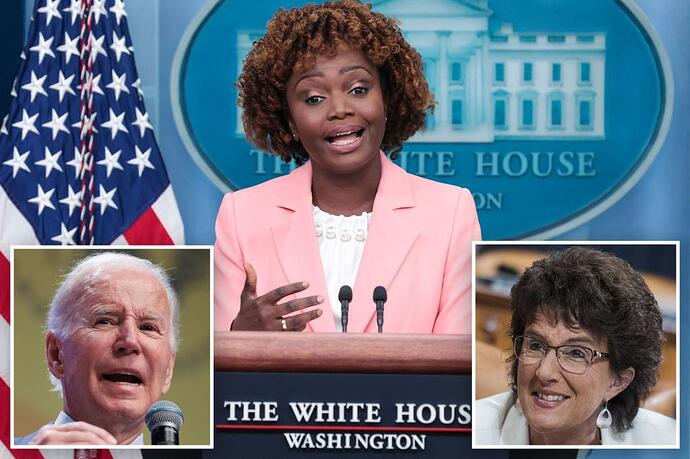 Biden searched out dead lawmaker because she was ‘top of mind’, White House...

President Biden thought the late Rep. Jackie Walorski (R-Ind.) was alive Wednesday because she was “top of mind” for him as he prepares to meet her family Friday.

her response is silly, but as you pointed out, maybe the best she could do given a poor hand. the news will read ‘WH gives silly response’ for 1 or 2 days, and its water under the bridge.

But how many times can they just waive a hand at Biden acting 80 before credibility goes to zero. I am guessing the midterms will effectively be Biden’s last election cycle.