Kinda surprised neither Ranger nor CSPAN have posted in this thread today.

The DOJ is going to run out of special counsels before too much longer.

Here - you can read some of my earlier posts that you might have forgotten.

I bet the folks at Clinton, Obama, Bush, Bush libraries are all going through their old files. I bet there’s “classified” information there too.

What’s the over/under for when the Bush, Clinton, Bush, Obama libraries start revealing that they have classified documents in their possession. 2 weeks? 3 weeks?

Many people including respected Senator Ron Johnson are saying the Hunter laptop, which the lying media and administrative state dishonestly covered up, contains an email from 4/12/2014 which is suspicious in light of the alleged classified information on Ukraine found in Biden’s possession. I’ll paste the text below (emphases mine) and eagerly await your response, which I have no doubt will be insightful. Then you can get back to arguing laws don’t matter since everyone breaks them.

I have to go to Houston with Beau tmrw for MD Anderson check up. Some thoughts after doing some research. And some further thoughts on organization going forward.
( Poroshenko appears to be the likely next President. Determining our teams relationship with him is important. He is credible with the west and by all accounts a true reformer (by Uk standards).
2. Some sort of decentralization will likely occur in the East. If it doesn’t the Russians will continue to escalate there destabilization campaign, which could lead to a full scale take over of the eastern region most critically Donetsk. The strategic value is to create a land bridge for RU to Crimea.
3. That won’t directly affect Burisma holdings but it will limit future Uk exploration and utilization of offshore opportunities in particular.
4. It will also result in further destabilization of Uk nationally and for whatever govt is in power. And the US will respond with even stronger sanctions. Those sanctions will threaten the tenuous support of the EU which does not have the political will to incur steep energy price increases.
5. Which will result in further price increases on RU gas to the UK.
(6.) The IMF loan guarantees will allow the Uks to weather the economic impact, but the required reforms to Uk public subsidies will weaken the new President.
7. There will be enormous pressure on Burisma to lower prices for the national good. Even if the company takes a hit in profits it would seem imprudent to raise prices in convert with RU price gouging.
8. Burisma has an opportunity here to play the hero if it ignores the artificial market value of their product and plays to the national interest.
9. Kazakstan could play a pivotal role by providing gas at rates lower than what the RUs are asking but I doubt they would want to poke the Bear.
10. The pipelines across Uk are the key to all of this. But if the Uks shut down the pipeline they also shut down 60% of their energy supply and put a strangle on EU supplies from RU which the EU will never accept (b/c they are pussies)
11. There is no immediate supplier solution to replace RU. Even if Burisma increased output from their reserves by 100% it would – 1, take at least two years and 2, Uk would still be about 35% short of their needed gas supplies.
(12) Our guy needs to set himself up as the anti- Victor Pinchuk (coal and steel oligarch- pro Russian Yanukuvich supporter).
> (13) The best way to weather the storm btw now an elections is to throw all in with the chocolate king. Even if he looses to Tymosheko (unlikely per polls as of today) Poroshenko is a safe ally that could help protect him from the vultures of the moment. Additionally you me and Alex should reconnect with the boxer and help gain his support of our guy.
14. And it is the moment (btw now and Elections) that he needs to weather. If he is seen as unfairly profiting from the RU induced price spike things could turn against him fast.
15. The Burisma website or press releases should talk about how Burisma as the largest independent is committed to supplying Uk industry with as much power at a fair price as possible during this crisis with an emphasis on utilizing the best technologies and world class team to ensure increased production and domestic delivery post haste.
16. We can actually be of real value here. Developing relationships, bringing US expertise to the company, supplying strategic advice on politics and geopolitical risk assesment.
(17) BS can actually have direct discussions at state, energy and NSC. They can devise a media plan and arrange for legal protections and mitigate US domestic negative press regarding the current leadership if need be.
18. The announcement of my guys upcoming travels should be characterized as part of our advice and thinking- but what he will say and do is out of our hands. In other words it could be a really good thing or it could end up creating too great an expectation. We need to temper expectations regarding that visit.
19. We need to ask for long term agreement and across the board participation. This is a huge step for us that could easily become very complicated. And if we are not protected financially regardless of the outcome we could find ourselves frozen out of a lot of current and future opportunities.
20. To that end they need to know in no uncertain terms that we will not and cannot intervene directly with domestic policy makers, and that we need to abide by FARA and an other US laws in the strictest sense across the board.
(21) The contract should begin now- not after the upcoming visit of my guy. That should include a retainer in the range of 25k p/m w/ additional fees where appropriate for more in depth work to go to BS for our protection. Complete separate from our respective deals re board participation.
(22) Buy a cell phone from a 7/11 or CVS tmw and ill do the same.

I don’t know who “our guy” is, but “the boxer” refers to Vitali Klitschko. “My guy” seems to be Joe Biden himself as he indeed traveled to Ukraine on or around April 21st of 2014 (link below). Ho hum, just more evidence of the obvious influence peddling by the Biden family. As a concerned citizen, I’d like to confirm that no classified information was peddled to benefit Burisma. Either way, the best part of it all is watching your kind defend it. 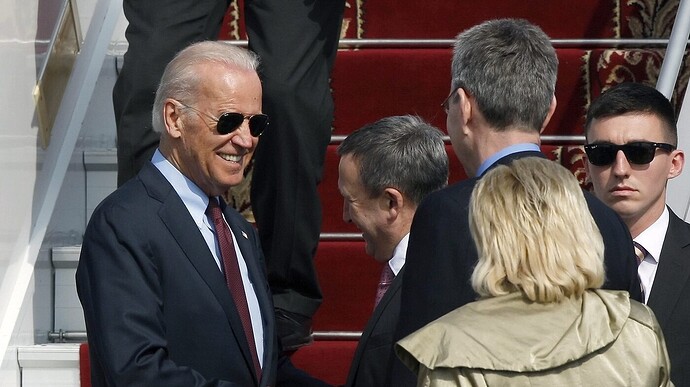 The vice president has arrived in Kiev amid increased tensions in the country's east between pro-Russian separatists and Ukrainian nationalists. He was expected to offer energy and economic aid.

you lost me here

He’s the Senator from Russia right?

The Wisconsin one? I’ve never heard him described that way.

That’s a long post. I’m sure there’s some good stuff in there, but I didn’t make it past the first comma.

I’m not well versed in the hunter laptop conspiracy, so while i looked at the bolded, none of it really triggered anything for me.

But yes, I’m not sure why CSPAN posts things off he is going to immediately discredit himself in the first sentence.

Wow, proof that some people will believe ANYTHING they read on the internet as long as it aligns with their preconceived beliefs.

But, why should anyone care about the Hunter laptop when we can make up our own e-mails and see who bites!

The Wisconsin one? I’ve never heard him described that way.

He once made a very respectable argument using the scientific fact that greenland is no longer green.