I’m starting to get into Xianqi (Chinese Chess). I’ve got the hang of piece movement and have been solving mating puzzles, but I can’t even beat the ‘Easy’ bot on the app I’m playing on yet. I think that will be my next game to tackle. Shogi (Japanese Chess) and Makruk (Thai Chess) are on my ‘to learn’ list.

I recently found pychess.org which is a lichess.org clone and a ton of variants coded in, but it looks like no one plays there. If anyone is interested, let me know, and I’d love to goof around sometime.

I’ve played at fishrandom.io before, but it’s also not super active. It does seem like chess.com’s added a ton of variants lately, at least.

If you like Thai Chess, you could also try playing on www.schemingmind.com. There is currently a public tournament for Thai Chess:
Makruk for everybody: Makruk (Thai Chess)

So this is very last minute, but I’ll be participating in a chess simul Sunday afternoon (assuming I wake up on time!) with GM Rashad Babaev. Do you guys recommend 1.e5 or 1.c5 against 1.e4? My experience with the Dragon has mostly been me as white against @MayanActuary so I’m not sure if I’ll be able to do as well as black in a possible Dragon (although I’m sure I’ll get crushed either way lol)

Will try to annotate the game. 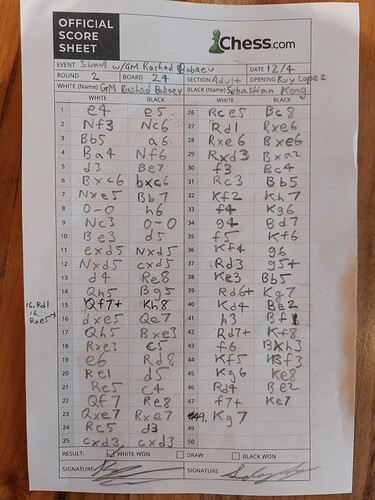 Game ended up becoming a Ruy Lopez. I blundered a pawn on move 7 and had to exchange my rook for his knight to prevent eventual checkmate at move 16. At one point I was down 3 pawns and down on exchange earlier but managed to make it to an endgame where he had to earn it (king, rook, 4 pawns vs king, bishop, and 3 pawns). I resigned on move 49 when he was gonna queen the next move.

After the game he said it was an interesting game. The biggest blunder was when i had no choice but to let his Queen take my f7 pawn. At that point I was very scared and thought I was gonna get mated soon, but I was able to prolong it long enough.

Grandmasters are ruthless and will make you pay for any mistake.

I realized my scoresheet was full of errors so I went back to try to replicate the game. Unfortunately towards the end of the game, I either forgot what I did or the GM had 1 extra move…not sure. There were like 6 of us remaining out of 27 and that’s when they brought clocks out. To account for the discrepancy, I just pushed my black a6 pawn 1 time (which is inconsequential to the game).

This was my first time annotating a game, so I knew I was bound to make errors.

This was my first time annotating a game, so I knew I was bound to make errors.

I’ve been annotating for a few years now and I still make mistakes on almost every scoresheet.

Don’t play the Dragon against a GM. Book lines for the Yougoslav attack go about 30 moves and spoiler it seldom ends well for black.

Yeah the Sicilian can be very sharp so I just went with the safer e5 and it was a Ruy Lopez.