There’s a red tailed hawk eating… Probably a squirrel in my backyard. There were two hanging out earlier today, one standing on the little arbor thing, showing off its bright red tail.

They are REALLY big birds.

I want to go out and plant apple trees, but i also don’t want to scare it off.

Now I have the Talking Heads song in my head

One tried to snag my neighbor’s dog the other day. And he’s not a tiny dog! He’s like a 20 pound Scottie!

google says a 5 pound dog is about the limit for a hawk. Might try for a 20 pound Scottie, but chances of success are low. Wife saw one get a squirrel here recently.

I was in math class one day and a huge bird landed on the tree branch right outside the window i was sitting next to. Was probably a hawk but mightve been an eagle. It was so cool that my not-so-social self poked the classmate sitting next to me to tell them to look out the window.

I looked at the… remains, and i think it was a rabbit. There’s nothing left but a bit of intestine, a few blood spots, and bits of fur. But the fur looks a little long for a squirrel, and very rabbit-colored. And one of the pieces of gut looks awfully large to be inside a squirrel.

Red tailed hawks are really thriving in my area. I see one almost daily whenever I’m outside for more than an hour or so. Barred owls also seem to be doing quite well. I hear them often, but only see one a handful of times a year. Coopers Hawks or Sharp Shinned Hawks are also pretty common, but I have a hard time telling the difference between those 2 species

google says a 5 pound dog is about the limit for a hawk. Might try for a 20 pound Scottie, but chances of success are low. Wife saw one get a squirrel here recently.

Yeah, it surprised me that the hawk would even try for a dog that big. Maybe he’s not that big. He’s at least 15 though - hard to say with the fluff. And he’s old and slow so maybe the bird thought he had a shot.

Neighbor thwarted the attempt though.

I have no idea on species, but hawks are really common around here.

Female red-tailed hawks are about 1.5 kg and can take something possibly about twice their size.

The more plausible explanations I can think of are:

Eagles do sometimes kill and eat animals larger than themselves. They don’t carry the carcass away, they just sit on it to eat it. 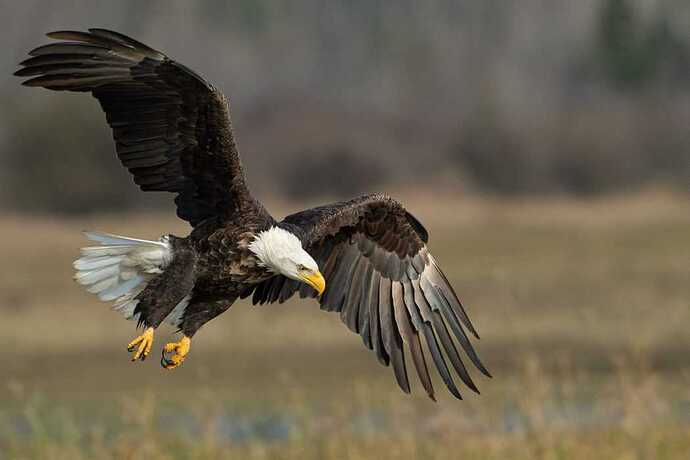 When Raptors Attack: How Eagles Attack and Kill Their Prey | The Happy Birder

Eagles are the most powerful birds on earth and hunt a wide variety of prey. I always wondered how they evolved to be so strong.…

Eagles will more often than not go for prey that are smaller than them or about the same size. However, eagles have been known to go for much larger prey. People have observed eagles preying on sheep, pigs, goats, and even deer! 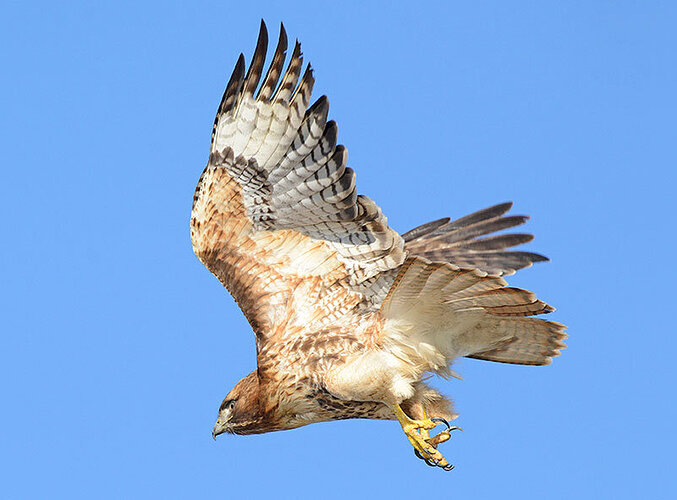 Protect Your Dog from Hawks and Other Birds of Prey

Hawks, owls and other raptors (birds of prey) don’t know the difference between a pet dog and, say, a rabbit or a rat. To them, they’re all on the menu. Learn how to keep you dog out of their talons and safely on the ground. While hawks and other...

Yeah, hawks might be able to carry about twice their weight (up to about 5-6 lbs); similarly-sized GHOs can carry up to 3 times their weight, up to about the size of a skunk (a particular favorite of GHOs, one of the few predators a skunk needs to worry about).

They might kill small pets bigger than that if they think they can safely sit & eat. With an owner nearby it’s much less likely they’d try it.

We have quite a few raptors around here. At home I have seen turkey vultures, black vultures, and the occasional hawk. At the park depending on the season we have turkey and black vultures, a bald eagle that hunts but nests at another park, osprey, northern harriers in the winter, kestrels, Cooper’s hawks, red shouldered hawks, and red tailed hawks. We have barred, barn, long eared, short eared, screech, and great horned owls. There are probably more, those are the ones I’ve seen.

The one in my backyard stood in one place, eating on the ground, for more than half an hour. I went out and photographed it, although i didn’t get very close.

similarly-sized GHOs can carry up to 3 times their weight, up to about the size of a skunk

Back when i had an outdoor cat, i used to tell her, “that’s the sound of death” when the great horned owl hooted.

I’ve never seen one in the wild, but i know we have them because i often hear them in the evening.

I’ve never seen one in the wild, but i know we have them because i often hear them in the evening.

We occasionally hear one hooting, or sometimes two hooting back and forth to each other, so I can tell they’re somewhat nearby although I seldom see them. Back in January I heard a pair at about 2am & one was sitting atop a utility pole behind our house. I took a few really grainy, horrible pics with my phone while peeking out the window trying not to disturb it.

As long as they feel safe they will eat a kill on the spot. We have two red tailed hawks that sit on the power lines along the road. I have watched them make a kill in the grass beside the road then spend the day flying back and forth from the power pole to the kill based on the road traffic.

We have barred, barn, long eared, short eared, screech, and great horned owls. There are probably more, those are the ones I’ve seen.

I believe we have all those here too at times, but the only ones I’ve seen at the house are the barred, great horned, and screech. The barred owls are very common based on the frequency of calls I hear. They make some great noises, some of my favorites of the birds in my area. I hear the screech owls occasionally, but I’ve only seen one up close once. I hear the great horned owls infrequently near the house, and very seldomly see one.