Had some TP Link thing that got enough signal to my office for a good connection.

The three things I’ve tried to use as a replacement have all failed, connection is spotty and drops me mid call.

I also got a new work laptop around the time the original extender died.

What else can I try on this? Will add the specific devices that are failing. I’m wondering if it’s a compatibility issue with work vpn adapter on the new laptop?

Haven’t tried a powerline extension yet, may go there next.

I had 2 cheap TP link extenders in my old (very small, squarish) house because the router was in an outside corner of the master bedroom. It was shit and barely worked. It was constantly dropping the signal.

I recently moved and ended up in a house >2x that is a sprawling single story so lots of distance and walls, as well as significantly faster internet speed options. Current modem is near the front of the house. I decided to spring for a Google Nest set-up that has access points mid-way and at the farthest end of the house. It has worked well so far on my 500 Mbs speed.

When I got a new cable provider, I put the new wifi in my office, which is in the middle of the second floor. No issues with wifi yet. Even my Weber grill outside with the iGrill works fine. No extenders.
Mind you, my wifi’s wired connections are all taken: work PC, printer, home PC, TiVo Mini. But that leaves phones and kids’ PCs and iPads and iGrill and security cameras using wifi.

Are specific devices failing when they are close to the wifi? (Or, can they not be moved?) If not, then it might be wireless waves not doing their job or too much lead paint in your house, or something. I do not know much of anything except that this NightHawk (from Costco) works pretty nice.

DTNF’s comment made me want to add - I have nothing hardwired into the modem or any in-home connection. Everything, computers, phones, TVs, peloton, smart speakers, etc are all wireless.

We had a house full of people (11?) for Thanksgiving where pretty much everyone had at least 1 additional device connect to the network and did not notice any issues.

I’ve got a set of 3 TPLink Deco M5 mesh routers that cover my fairly small house well (I have the same thing that Kenny had - modem in one vertex, the biggest user in the opposite vertex). I’ve had no problems over about 3 years, I think.

I decided to spring for a Google Nest set-up that has access points mid-way and at the farthest end of the house. It has worked well so far on my 500 Mbs speed.

Google Mesh? (Nest are their cameras).

My model, computer and router are all in the basement. Never had good wifi from basement router to 2nd floor bedroom. Extenders always sucked (really slow speeds). Added a second router on a different SSID which worked better…but was always annoying to switch networks.

Eventually just spent money on a Google Mesh setup. It was like $200 for 3 access points. Set up was easy and it’s worked flawlessly. I assume there are other mesh systems out there that do the same thing but I haven’t checked in a while.

Eventually just spent money on a Google Mesh setup. It was like $200 for 3 access points. Set up was easy and it’s worked flawlessly

I did a combination of what DTNF did where I had Verizon put a line in directly to where the office is (so work stuff is on an ethernet cable) and also got Google Mesh so the internet finally works well even at the farthest point in my house (i.e. my bedroom). I have a smart plug for my bedside table light at the farthest point in my house from the router that used to be a pain because it wouldn’t always be connected, no longer an issue!

Google Mesh? (Nest are their cameras).

No. Google Nest Wifi. Nest is a line of products, it isn’t just a camera. 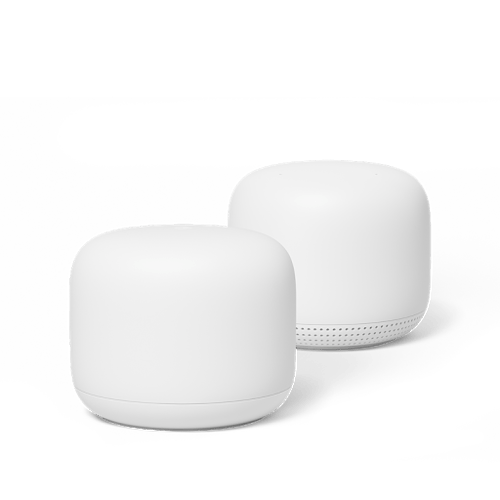 Here’s the link that compares Google Wifi (presumably what Dan and ldance have) vs Google Nest Wifi.

Ah yeah it’s nest, I’ve got this one:

One here plugged into the router (or modem?) in the office and then two at a couple places in my house

My base router (with wifi) is from my ISP, can I use a Google nest router with that? At one point I tried to use a better router and apparently that was causing issues because the ISP router wasn’t setup to attach to another router.

Could your ISP provide a router that is not a wifi?

can buy up a stronger connection from the cable company?

I looked into it, the speed I’m getting now (75 MPs down) should be enough, the issue I’m pretty sure is the wifi extender.

I have a modem/router from AT&T. The Nest router is connected to that wirelessly and the access points automatically connect to the Nest router. The Nest mesh has a different network name than the AT&T wifi and everything connects to the Nest wifi network.

You are going to have problems daisy chaining two routers. You shouldn’t have to use your ISP’s router. I never do. It should be:
ISP->Modem, probably from ISP->Router, from anywhere.
Sometimes they merge the modem and router, but again, you should be able to seperate them, and use whatever router you want. OR, alternatively, if they’ve merged the modem and the router, just turn off the router functionality in the unit and add you’re own. But yeah, don’t daisy chain one router on top of another, that’s not going to be any fun at all.

For OP, we use Deco extenders. One acts as a router base unit, then the rest just act as extenders. You can either use wifi to connect them back to the base unit, or hardwire. I’ve got them working fine, they helped our wifi. The only complaint is that I couldn’t get them to work when hardwired together, so they’re all connected via wifi.

I suppose I should look into how to turn the wifi part off the router so I can use my own better wifi.

For now I’ve left the extender basically next to the base wifi & router from my ISP, that seems more stable (although the extender claimed to be getting enough signal where it was),

I got fed up with trying to get decent internet throughout my house a couple of years ago (especially as we shifted from DirecTV to strictly online streaming), and went though a range of devices until I found a setup that I consider acceptable.

I have a Motorola MB8600 cable modem in my office rather than the disappointing gear Comcast is willing to lease its customers.

It connects to a Ubiquiti Dream Machine as the router. I also have a Ubiquiti US-8-60 switch in my office so that every computer/gadget that accepts an ethernet connection can be wired in. (Generally, if a gadget doesn’t move, you should try to connect it by ethernet rather than congesting WiFi spectrum).

In the living room, I have a Ubiquiti AC-Pro, which provides a wireless bridge to another Ubiquiti switch (to connect more non-moving gadgets) and to extend WiFi coverage to the other side of the house. It would have been better network design to run ethernet through the walls rather than relying on the wireless relay…but my wife wouldn’t let me drill, and my house is old enough to predate the current custom of having conduit in the walls/being pre-wired with ethernet runs.

Ubiquiti gear is more expensive than regular consumer-grade gear, and there is a learning curve in setting it up. But the arrangement works extremely well (the only issues I’ve had, knock wood, have been with the cable internet service, rather than my gear), and has the added advantage of supporting VLAN functionality, making it possible to firewall IoT gadgets (and their security concerns) away from regularly-updated computers, and to firewall guests away from household traffic.

Before I made the plunge and invested in an all-Ubiquiti setup, I was using a Netgear Orbi to set up a WiFi mesh to cover the entire house and bridge the office-living room gap. Orbi has the advantage of using a discrete 5.8GHz channel to link its access points, rather than putting gadgets on the same channel as the backhaul, which helps throughput. However, Netgear was bad about pushing buggy firmware out, which created some network instability for me. Since I was WFH before the pandemic made it popular, relied on the 'net for my phone before business communications moved to Teams/Zoom…I got tired of auto-rebooting the router every day when I got up as the workaround to mostly-resolve that instability / to mostly-resolve my wife calling me while I was traveling to tell me “the internet is down again”.

So I witnessed the extender causing interference and disconnecting the base router, so it’s been returned.

I got a set of powerline links, half a day in that seems to be working.

I got a set of powerline links, half a day in that seems to be working.

I’ve used these before, and they worked great for me.