(Who cares, but) WTF is going on with the Actuarial Outpost FB group?

Ok, not a group I care about much, though it does show up in my FB News Feed since I’m a member. Today I even decided to respond to this question

Which maths subjects do I need to master before I can sit for actuarial exams?

This was my answer, not an off the wall answer even though some would think it could be impproved upon:

You need to know probability very well. One year of college-level probability would usually cover enough material, but you need to know it very well. Just being able to pass one year of college-level probability would often not suffice. You could pass FM without that, but maybe no others. A year of two of calculus would be a very good idea. You might pass some exams without it, but you would have trouble with some of the material without it, and would find some questions impossible without it.

But no one will ever see that response, because it got this reaction from the site:

Why would no profile picture be a rule?

Even stranger, since I was sure I had posted there before and never had a profile picture, I tried to do some searches on the group, including searching for all my activity on the group.

I got this response

WTF? I knew I had at least tried to post. Could they all have been declined for No profile picture, without my realizing it at the time?

No, because a search for Steve White produced this and a few others. This one (from context in the very brief thread) must have been posted right around Oct 13, 2020. 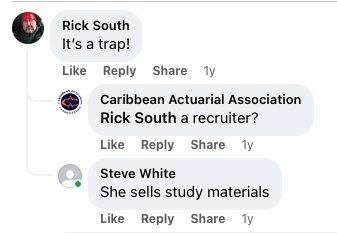 Clearly no profile picture there, but it let me post. Oddly, the search of the group for “Steve White” also produced some results that I can’t fathom why they were returned. Most had only a few responses, including some with responses by a different Steve. One had no responses whatsoever, and no “Steve” or “White” in the text; 5 likes but no like by any “Steve” or any “White”.

There was a least one other post that I remember making and remember enough about it that I should have been able to find it via Search, but no success. Deleted? New loaded? Who knows?

My guess is they get a lot of spam in that group and filtering on no profile picture as a criteria to post might be to guard against that?

Tom Troceen (and one other dude) appears to still be the admin of that group, so maybe ask him.

I am a facebook group admin on a different public group (not actuarial), and the group admin/mod stuff on Facebook changed relatively recently.

They let us put in a bunch of automated rules to help keep out spammers. I didn’t use whatever rules whoever is left in that group is using. here are the users listed as admins: 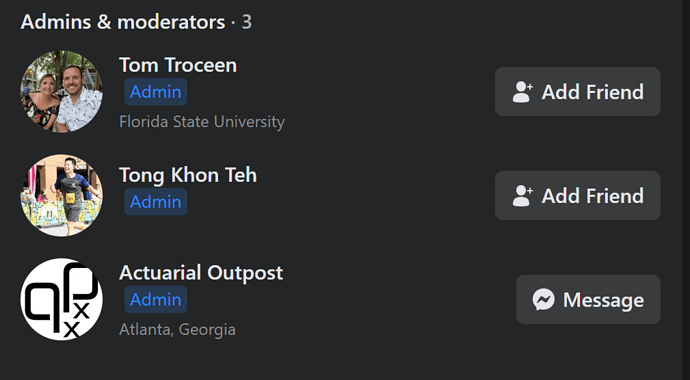 It may not even have been one of the three who agreed to the new rules. Some automatically went into effect as default unless the admins changed them (I changed rules on my group, so that I individually approved of users)

I feel sure Tom Troceen has no more involvement with that group. I’ll try to message Tong Khon Teh.

Yeah you’re probably right on that

There’s a good chance that nobody has any involvement with the group and it’s on autopilot.
I’ll speculate further that DW Simpson has absolutely no interest in social media of any sort these days.

There’s a good chance that nobody has any involvement with the group and it’s on autopilot.
I’ll speculate further that DW Simpson has absolutely no interest in social media of any sort these days.

Does that nearly dead site ActuarialOutpost.com count as Social Media? DWS posted a job there about a month ago.

Tong Khon Teh, who works for Acted / Coaching Actuaries, is an admin of the Actuarial Outpost facebook group. Will he respond to my message about profile pics? We’ll see. I don’t seem to be very good as searching there, but he posted there in an admin capacity (about spam) in Jan 2021. Not sure he’s posted there since.

What has been the general activity level there?

How much time? Since I’m a member of the FB group, posts show up on my newsfeed. Maybe 3 or 4 a day (including responses, not new threads). Maybe a few more than that. I don’t think I’ve tried to respond to one in months before this, nor do I expect to try much in the future. Is it worth adopting an avatar of a maltese or something to have the option of posting? Possibly, even if I never use it. It’s been MANY months since I went to ActuarialOutpost.com, only looked there to reply to Space Lobster.

Even though I can’t find most of them (I did find at least one), the posts I did make there were letting people know goactuary exists. This is the one I found. It is a response I made to an actuary I used to work with, but it was made in the outpost FB group.

Is it worth adopting an avatar of a maltese

Pre-covid our intention was to have a career development conference. We’d actually launched, venue booked, speakers booked, and were selling tickets.
Then of course, covid shut everything down.

You are right about one thing.

Anywho, the questions was from someone who wants to do the bare minimum. They will not succeed. I’d say that “college-level probability” is college-dependent. I’d add, “offered by the Math/Stat department, and a required course for Math/Stat/STEM students.”

Anywho, the questions was from someone who wants to do the bare minimum. They will not succeed. I’d say that “college-level probability” is college-dependent. I’d add, “offered by the Math/Stat department, and a required course for Math/Stat/STEM students.”

Anywho, the questions was from someone who wants to do the bare minimum.

I did not read enough to conclude he wanted to do the bare minimum. I took it as that he was asking about the scope of the exam. If he never reads my response, c’est la vie. OTOH, I don’t see any of the other answers being much more useful whatever his background. All the responses so far.

Calculus, statistics, and a ton of algebra.

Double-plus good if you can take a “statistics with calculus” course as well. You’ll learn it later on the exams, but the class really helped me when I took that exam.

IMO, my answer was still the best. Statistics needed before sitting for actuarial exams? Not SOA exams, IMO. Maybe before some of them, but not before starting.

No response to my message to the Admin Tong Khon Teh yet.