What is the last thing you bought?

For me, it was some tshirts.

About to be displaced by a pair of Father’s Day sneakers. 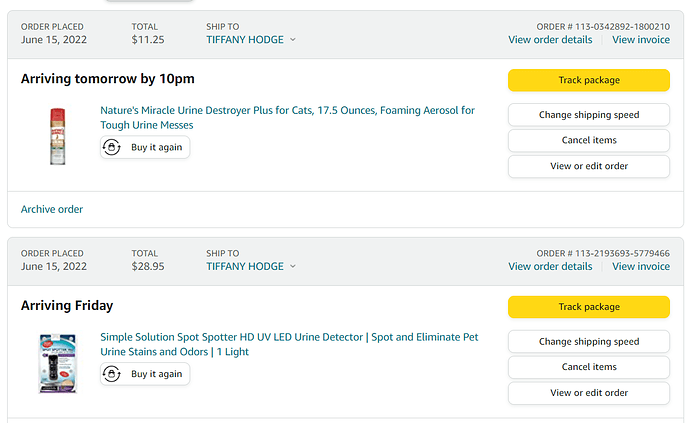 Are they not using their box?

Older cat peed in my office (lower floor), presumably because she was annoyed there were foster cats upstairs (litter box in laundry room upstairs). I’m probably going to need to redo the floor in that room now, but until then, I just want to lessen the smell.

Now upstairs, the foster kitten has been a shithead and refusing to use any litterbox. We locked her in the tiled bathroom until she started being consistent with a pee pad. Then we put the pee pad in the box. Now I’m trying 3 different kinds of litters. She pees outside the box but on the tile now (usually). But I haven’t found all the spots that previously occurred on the carpet.

I bought lunch on Monday.

Lunch. Other than that, I bought some Cremo shaving cream for travel, now that travel is a thing again.

Just bought a new mat for under my work chair

The last thing OddSox bought was apparently Mario Strikers: Battle League on my credit card. This guy and his crazy spending.

The last think I bought was three tacos. They were delicious, but not quite as good as the burrito I had gotten last time I went to the truck.

I have so much Amazon credit, it’s going to be a while before anything hits my credit card.

In my experience if they’ve done a significant pee on the carpet, start planning to tear out the carpet including the padding underneath once it’s resolved. Otherwise you’ll keep catching whiffs of it at least when it’s warm.

Maybe you can get away with a handful of accidents, thoroughly cleaned up.

I’ve read that spraying vinegar in the area will discourage them. Doesn’t make sense to me because it all smells like ammonia, but it worked when one cat was sneaky-pooping in a couple of corners, hasn’t happened since.

My most recent buy was groceries, but the most recent non-boring was a board game based on the movie Rear Window for my partner’s birthday.

The last things I bought were from the fish market: pound of scallops and a pound of cod.

I buy some sort of food item nearly every day.

The last think I bought, other than food or beverage, was an eye-bolt from Lowe’s on Sunday. Before that, was bug spray at Target, like three weeks ago.

I don’t buy many things. Other than food or beverages.

The last think I bought was three tacos

I read about these tamales in Mexico and California, they sound good. Never had one. I imagine they’re in the burrito family.

I read about these tamales in Mexico and California, they sound good. Never had one. I imagine they’re in the burrito family

As of now, the last thing I bought was toner for my printer.

Yeah, we are pretty spoiled in California - we lived in NY/NJ for a while and the Mexican food was not the same out there.

Tamales are ok, not as good as other choices IMO. Pretty different than burritos.

Tamales are ok, not as good as other choices IMO.

I think many, perhaps most, tamales are just ok. I used to go to a place that made amazing tamales with chicken and some kind of green chili sauce inside and they were killer. There is a woman in my city who makes some pork adobo tamales and sells them out of a cooler at the farmer’s market, I think I could eat about six of them in a sitting.