I’ve about finished up with the Year of Six Presidents book - it’s a nice historical capsule, but there is a lot of nasty stuff going on in 1920… you get the Ku Klux Klan, lynching, some extremely offensive language actually published in newspapers, racism, sexism, corruption, homophobia (that bit I wasn’t expecting), an incapacitated President, riots, assassinations, bombings, etc.

People should read/watch more history. It’s pretty nasty, but it definitely helps one realize there’s nothing particularly special about the -now-.

The internet is what makes “the now” special. Every opinion is heard

But yes the relative nastiness is the same, we are just more aware, on a day to day basis

The internet is what makes “the now” special. Every opinion is heard

Interestingly, lots of “every opinion” were being heard back in 1920, too…but with serious legal repercussions. Eugene Debs was in prison for distributing anti-conscription material during WWI. The cases relating to him and other anti-WWI protestors being imprisoned simply for their words is where the spurious “You can’t shout ‘fire’ in a crowded theater” reasoning came from: Schenck v. United States - Wikipedia [yes, Debs’s case was Debs v. U.S., but that was decided after Schenck] The guy who published material claiming Harding had a Black forebear also was under criminal proceedings, and he fled out of the country.

Lots of different personalities, and yes, some of the info wasn’t broadly known until many years later (such as Harding’s mistresses and illegitimate child.)

One interesting point of the book was how people got info in 1920 faster than just waiting for the next day’s newspapers.

Radio wasn’t widespread, amplified speech was used for the first time in that campaign, people got election returns by hanging out in various venues where results were transmitted via telegraph. Movie theaters/other venues had parties election night where they promised entertainment, plus regularly updated returns. People didn’t have to wait til the next morning to get the results.

Women were voting for the first time in many places, primaries were becoming more widespread (though the political machinery was still involved in the final pick of candidates… primaries weren’t the deciding factor in 1920). And yeah… Prohibition. BOOOOOO

Anyway, interesting book. The index for the ebook was worthless – they just ported the index over without any page numbers… or links or anything. It was just a list of words. What was the point?

As for mistresses and other indiscretions, presidents and personal stuff were pretty much hands off for the media until Watergate. and then again with Clinton.

In some cases it was easier to be anonymous, because people were paying for everything in cash.

In any case, no the media weren’t necessarily “respectable” in 1920. Still had the yellow rags, and full of rumors. I think the “respectable” stuff was more late 1930s and after, and there has been plenty of personal stuff dropped in the media for the “correct” targets.

The example in the book was the Democratic presidential candidate, who was divorced, and his wife divorced him over cruelty. That was definitely remarked upon publicly. But then, a divorce isn’t private.

People should read/watch more history. It’s pretty nasty, but it definitely helps one realize there’s nothing particularly special about the -now-.

I have found this to be true for me.

but it definitely helps one realize there’s nothing particularly special about the -now-.

Except I hear this too often as a defense now - holding current behavior against the worst of the past. Seems like a bad standard to me. Bad ought to be bad regardless of the horrible sh*t done in the past, imo.

Except I hear this too often as a defense now - holding current behavior against the worst of the past. Seems like a bad standard to me. Bad ought to be bad regardless of the horrible sh*t done in the past, imo.

Oh, I’m not saying this is all shitty behavior (whatever current shitty behavior is). It’s a pushback against those who say “Oh, they were better back then… people behaved better…”

No, they usually didn’t. Not in politics, at any rate.

The Princess & the Goblin by George MacDonald

For being published in 1872, it really doesn’t feel dated as a children’s fantasy story

Tailchaser’s Song - Tad Williams first book. It’s been on my shelf foor 20 years and while I’ve read a fair amount of his work I’d never read this one which started his career. An interesting take on the world of cats.

I finished Maisey Dobbs by Jacqueline Winspear. It’s the first of a series of mysteries featuring, duh, Maisey Dobbs, who grew up lower class in London, moved to the country as a maid, then, through some luck and taking advanage of opportunities, ended up as a protege of an investigator and, as the book starts, taking over for the retiring mentor. It takes place after WWI and much of the book has to do with the effect of the war on people and on British society. There is a mystery at the start and end of the book, but the bulk of it really is setup and backstory. It was good enough that I’m gonna move on to the second book.

Finished The Priory of the Orange Tree last week. It was a solid fantasy novel, but some pacing issues (the end comes together a lot faster than I would have liked). I think this would have been better as a duology with the first 600 or so pages as book 1, and book 2 having another 400+ pages. Solid as is, though.

About 1/3 into Outlander. I’ve seen the show already (wife is a big fan of the series).

I just started NeuroTribes (book about autism (I’m autistic)). Going to read that off and on but no rush to blow through it.

Next planned reads: The Goblin Emperor by Katherine Addison, The Wind’s Twelve Quarters by Ursula K. Le Guin, The Penelopiad by Margaret Atwood, Into the Drowning Deep by Mira Grant (Seanan McGuire), The High Window by Raymond Chandler, and The Spy Who Came in From the Cold by John le Carre.

Bears are related to pigs. Something like 95percent of Tri…Tri…Tri… A parasite exposures these days are from bear not pork.

When Crickets Cry by Charles Martin. His books are painfully slow to get into but I usually like them in the end. They are very much character driven vs plot driven, and I’m ok with that, but oh so slow.

I finished Connelly s The Lincoln Lawyer and have to watch the movie now. In comparison the Charles Martin book feels even slower. I have another Connelly but I don’t want to binge them. Need to see what else is in my audible library.

Went back to playing Disco Elysium. Not technically a book (especially now that it’s voice acted) but good if you enjoy murder mysteries, jokes, surrealism… or just good writing paired with a cool story-telling device.

I’m mentioning it here because I think it’s easy to play and one of the very few successful attempts at an “interactive novel”. In fact, the only video game that I would recommend to book-readers.

Katherine of Aragon by Alison Weir. This series is fictionalized and a lot more fun to read than The Six Wives of Henry VIII. I loved getting to know Henry as a kid.

It’s longer than what I’ve been reading lately and if it takes too long I might have to set it aside for my May book club read. And I got it from the library. So I might have to listen all night. I could buy it from Audible but there are 6 of these and I might have to buy them all. Hmmm

The President is a Sick Man

about a stealth operation on Grover Cleveland 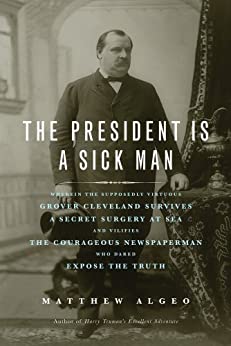 Amazon.com: The President Is a Sick Man: Wherein the Supposedly Virtuous Grover...

The President Is a Sick Man: Wherein the Supposedly Virtuous Grover Cleveland Survives a Secret Surgery at Sea and Vilifies the Courageous Newspaperman Who Dared Expose the Truth - Kindle edition by Algeo, Matthew. Download it once and read it on...

Subtitle: Wherein the Supposedly Virtuous Grover Cleveland Survives a Secret Surgery at Sea and Vilifies the Courageous Newspaperman Who Dared Expose the Truth

I finished The Tale of Holly How, another “Beatrix Potter” mystery by Susan Wittig Albert. The style is not very typically mystery-like and the book intersperses it with some more Beatrix Potter-like content. This is the second I’ve read and I might come back to others later.