What are you driving?

Dodge Ram 1500 Sport, 2013 (need it to tow ATV’s and our fishing boat. And it’s a crew cab, so it was big enough to double as our family car for some years). Hoping to drive it until electric trucks are a reasonably buy.

SO drives a volvo XC60, also hoping to keep it live until electric cars are commonplace.

I drive my wife crazy.

Hoping to drive it until electric trucks are a reasonably buy.

SO drives a volvo XC60, also hoping to keep it live until electric cars are commonplace.

Depends on the day.

I have a 2015 leaf that gets me almost everywhere I need. It does not get me everywhere my mom needs, so sometimes I borrow my spouse’s 2017 pacifica.

The boy who still lives at home bought my old Prius from me, and the girl who lives at home and drives uses the PT cruiser we bought years ago for my mom to take kids to and from school when the kids’ new elementary school didn’t have buses. I occasionally borrow the Prius if the van isn’t available, I refuse to drive the PT cruiser.

gas cars are going to turn into dinosaurs very quickly once we reach tipping point. I don’t want to buy another couple of cars only to find out I should’ve gone electric. I’m ready for electric now, but I don’t think they’re quite prime time yet.

To me, electric cars are for hippies and people who want other people to think they care about the planet.

It has about 105,000 miles on it. We also have a boat. I will drive this thing till the wheels fall off which seems to be nowhere near happening. The Platinum part means it ahs all the creature comforts (heated and AC leather chairs, Sony sound system with amp, motorized stepside that comes up and down when I open the door, wood trim)

We also have a boat. I will drive this thing till the wheels fall off which seems to be nowhere near happening.

Your boat has wheels?

The trailer does LOL

2006 Honda Accord. It’s a hybrid, but really doesn’t get any better mileage than a regular one would.

The trailer does LOL

You sentences implied you would be driving the boat until its wheels fell off.

To me, electric cars are for hippies and people who want other people to think they care about the planet. 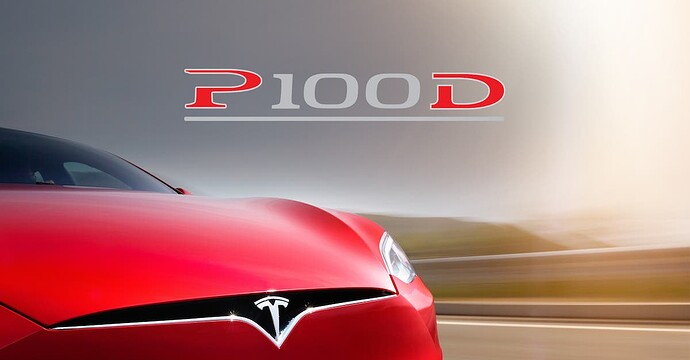 In the midst of many cool Tesla races, a video clip of a 1/4-mile drag race between a Tesla Model S P100D and Ferrari F12 displays yet another insult to the internal combustion engine — this pricey Italian exotic was at the mercy of an all-electric...

I have an old Toyota (15+ years, 220+K miles) that still runs well enough to get local places (Mom is 30 miles away, that’s about as far as I need to go).
Now, I’m wondering if I should ever bother to replace it, since I won’t NEED to drive it frequently enough anywhere, and I won’t be going anywhere that I’ll need to impress people.
It does need a new suspension, like all of it. So, gonna lower it just a bit more, make it stiffer…

And, if I replace it, I’ll need to find a new (or used) car with manual transmission, 'cause more fun.

Currently a 2012 VW Passat. Test driving an ID.4 in June though, so that may change in the next few months.

I’m a bit of a gearhead. I had some American iron growing up (Chevelle, Galaxie), couple of hot hatches (Civic Si, MazdaSpeed3), a BMW 335. I currently have a Chevy Volt, which is not very gearhead, but whatever. Electric cars are the future, and not just for hippies, they are ridiculously fast. I love American V8s and German straight sixes as much as anyone, but electric cars are game-changers. Even the lowly Model 3 is quick, the base car does 0-60 in 5.3s, quicker than a VW GTI though not as quick as a Golf R. The Model 3 Performance will hang with a brand new Vette.

It will be nice to see battery weight come down, I know they are working on it. Nice thing with batteries is they can keep the weight low and potentially somewhat centralized. So you get a low center of gravity and a lower polar moment. And electric motors make ludicrous torque, available at 0 RPM, they are quick in city driving.

I’m probably in the market for a car next year. We’ll see if electric infrastructure in Kansas has improved enough for me to drive an electric car to see family in rural parts of the state and back. My other hesitancy is that Tesla has had issues with fit and finish, touch screens failing, etc, suppose a Mustang Mach E could work. Plan B is a Civic Type R, nothing wrong with that, I suppose.

Wife and I share a 2013 mazda3 that is about as like to start as not… Probably should fix that thing.

I’m waiting for the Yaris GR to come to the States.
Even better, waiting for the Corolla Wagon GR. I’d rather have four doors and trunk space, for the times I need them (trips to wine country or Home Depot).

Toyota's incoming performance heroes, the GR Corolla and Wagon, are set to launch sooner than expected, and with a focus on road speed over rally ability, according to fresh reports out of Japan.