Thread to discuss when the police kill a civilian 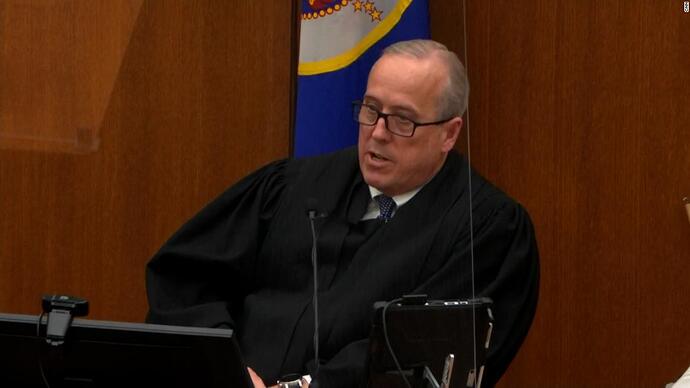 The judge overseeing former Minneapolis police officer Derek Chauvin's trial in the death of George Floyd said Monday that Rep. Maxine Waters' comments could be grounds for appealing a verdict.

In addition, Biden apparently called George Floyd’s brother. I guess these people have no interest in letting the system play out before doing any of this? Why not just see if he gets convicted first?

I was watching the proceedings live when the judge scolded members of congress without naming any names. Completely agree, the process of justice is one of the most fundamental things about a democratic society. Whether you think Chauvin should be found guilty of any or all of the charges it’s fundamental he receive a fair trial to arrive at that outcome.

Biden seemed to be hold off on any of that until the jury had been sequestered.

Whether or not Waters should have said anything is a separate issue, but the judge sounds like a self important idiot with his pronouncment yesterday.

Here’s an idea: Wait until the trial is over and a verdict has been reached before saying something

I agree that Maxine Waters should not have said what she said. She should clarify her remarks. She should possibly be censured in Congress.

If he stopped here he would be fine.

“I wish elected officials would stop talking about this case, especially in a manner that’s disrespectful to the rule of law and to the judicial branch and our function,” Cahill said after dismissing jurors from the courtroom.

But then he added this totally unnecessary and inflametory piece.

“I’ll give you that Congresswoman Waters may have given you something on appeal that may result on this whole trial being overturned,” Cahill said.

I agree with Waters said, but disagree with her timing.

Given the history of “justice” that black men have often received from our “impartial” judicial system.

It’s not inflammatory at all, it’s representative of what the judge was thinking at the time. He had to have at least considered the possibility of declaring a mistrial, but decided to stop short of that, and let the courtroom know his thoughts on outside influencers of the process.

know his thoughts on outside influencers of the process.

Sounds like the words of the Judge in the movie “Mississippi Burning” if you ask me.

Here’s an idea: Wait until the trial is over and a verdict has been reached before saying something

Because free speech only applies to Anglo-Saxons.

If he stopped at “You are welcome to bring up the issue on appeal if you feel it is prejudicial” that would be fine. Going as far as saying “think might get whole trial overturned” is overstepping his bounds. Especially after ruling it was not grounds for a mistrial.

I think the context is useful. They’re in the courtroom after the jurors have left to go deliberate and they’re going through the final items about appeals/objections that took place during the final statements that day. The defense attorney went through a few items arguing about mistrial which the judge denied and then he eventually gets to this issue where the judge is forced to concede it wasn’t great but hopefully the jury followed instructions to not watch the news and thus his bit about them staying out of it. And then as they’re buttoning up he mentions the part you quote. It all seemed pretty reasonable in context to me.

Having a shitty lawyer is often grounds for appeal.
That is just general knowledge and has nothing to do with this trial. (My lawyer forced me to type that.)

If he stopped at “You are welcome to bring up the issue on appeal if you feel it is prejudicial” that would be fine. Going as far as saying “think might get whole trial overturned” is overstepping his bounds. Especially after ruling it was not grounds for a mistrial.

I agree.
I hope Cahill is censured for this bullshit.

Judges are pretty free to say or write what they want and have a lot of power. No chance that happens.

Is there a difference between Waters’ saying it or any other allegedly influential person not in public office saying it?