The Mysterious Disappearance of Gabby Petito

How do we not have a thread on this yet?

Short story: Young, pretty 22F goes on a driving vacation from Florida to visit national parks in the western US with her boyfriend/fiance, planning on travel vlogging the trip. He shows up back home without her, and won’t say anything, even to police questioning him about her disappearance.

So what do you think has happened to her? The boyfriend, Brian “Dirty” Laundrie, has to have done her in, right? BTW, I made up that nickname, but it fits.

How long until the authorities figure things out? Is it be a matter of days or will this string on for years?

This is at the top of my Google news feed, so I MUST be interested in it, based on my murdering-girlfriends obsession.

They could probably retrace the route (ATMs?), ask people at those places if they saw her. When there is enough evidence that she has not been seen, that narrows the search to… half the country, I guess.

So, yes, he has done her in. Just the where, when, how, and why is outstanding.

Or, it’s a high-level hoax. 'cause that’s always fun to do.

I think you left out one crucial detail in your descrpition of this young lady. And why this is news.

They have known each other all of their lives, which makes this most unusual. They also both have mental health conditions (don’t we all though). The interesting thing that I read was his lawyer suggested he not incriminate himself because “what you say may be used against you.” I agree with this advice, even if he is not guilty of her disappearance.

He will likely be arrested as he is the last known person to see her. I could ultimately see an insanity plea.

this story looks so obvious as to not qualify for a dateline or 20/20 special 10 minute event, let alone 2 hours. i guess if there is no evidence, Dirty can more or less walk.

Even if they have evidence, he could walk if he killed her here: 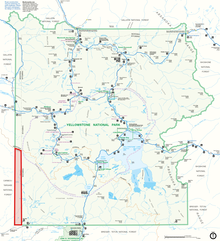 The Zone of Death is the name given to the 50 sq mi (129.50 km2) Idaho section of Yellowstone National Park in which, as a result of a purported loophole in the Constitution of the United States, a criminal could theoretically avoid prosecution for any major crime, up to and including murder. The United States District Court for the District of Wyoming is currently the only United States district court to have jurisdiction over parts of multiple states. This is because its jurisdiction include...

I never heard of this but what an intriguing thought

Can he be arrested if they don’t find a body?

There’s also 2 dead women in Moab. (He’s definitely a “person of interest” in that crime as well.)

They also both have mental health conditions (don’t we all though).

“We all” as in all the people on this forum, or people in general?

I think you left out one crucial detail in your descrpition of this young lady. And why this is news.

And that detail is…?

I haven’t kept up with this at all, so I’m going with my intuition here. Is it that she’s white?

They also both have mental health conditions (don’t we all though).

“We all” as in all the people on this forum, or people in general?

That is an exercise for the reader

Mathman and the President can come collect their prizes.

I’ll be surprised if someone other than the boyfriend is convicted.

Theory 1: He killed her, whether by accident or on purpose.

Are there examples where 2&3 would be crimes? Why the silence?