I’m not big into golf, but I figure there ought to be a thread for The 2022 Masters since we skipped a thread for 2021.

The three-time champion is no longer listed in the field of active players, but instead as a past champion who is not playing.

Good news: he now has time to go work with the Saudis on a competing tour. Maybe even play some tournament there and make a shitload of money, and later on feel vaguely bad but not particularly sorry about it.

I was just using our general golf thread for all things golf, as it is not as frequently posted to as, say, a dedicated Seahawks thread.

Mistakes have been made. I don’t feel strongly about having a separate thread, but it’s [spoken with reverent voice] “The Masters” [cue soothing music], so I thought, perhaps, it was apropos.

I’ll allow it, for the tradition like no other. 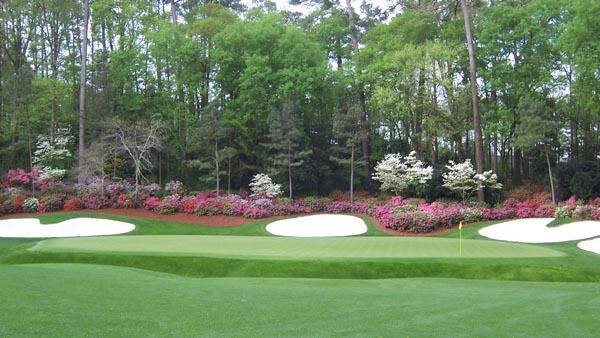 “THOSE AZALEAS NEED TO POP!!”

Should be a lot of fun. I am picking our homegrown talent here in Louisville and going with Justin Thomas.

Tee-Time Decision for Tiger, I guess.
Can he play FOUR rounds in four days (plus all that post-round interviews and autographing, etc.), and still be in contention?

Hoping for Xander, Rory or JT. JT hasn’t done as well at spring time Masters and Rory is so hot/cold nowdays. Banking on Corey Conners in a pool along with Macintyre. Pick is Cam Smith.

The TV announcers sure did like to talk up Scheffler’s chip-in on hole #3. That shot was certainly a great shot and helped expand his lead, but I think the event which had a bigger impact on his score on that hole, but was glossed over, was the drop he received as relief from the scoreboard. He hooked his drive way to the left and deep in the trees. The next thing you know, he’s on the edge of the woods with a clear shot towards the green.

You want Cameron Smith to shave the 'stache, but you’re ok with the mullet???

I couldn’t get past the mustache. I didn’t even notice the mullet! The only thing worse than a mullet, imo, is if he had one of those tiny pony tails.

Smith has his own thing going. a lot of bad looks. good for him to just rock them.

not good for him to make a sweet birdie to put pressure on the leader and then follow it with a triple bogey on the next hole. turned the rest of the round into a boring time.

rory and morikawa ended the round in fine fashion.

Bookies must be really happy that the betting public is generally composed of suckers and people threw down wads of money on Tiger. He’s got one more major than I thought he’d have after the back surgery, but I can’t see him ever getting close to winning another major again.

Tiger’s performance was very impressive. It showed me that he absolutely will come close to winning another major. Now, I would still bet against that happening. But he’s got the best people in his circle who will continue his rehab. This was a total dry run. He hasn’t had to test his stamina like this, and he held up alright for the first 2 days. His driving was surprisingly good, while his chips/putts faded over the weekend.

Clearly making the cut at the Masters is no joke.

You have to be within the top-50 to make the cut. This year, that was +4. Woods had a solid 71 to open, and that wasn’t unexpected. Neither was tailing off from there. He was going to have to post a couple rounds under 70 and then go 71-71 to have a shot, and he was never doing that. That’s why all the people betting on him to win this weekend would have been better served throwing their money out the window or lighting it on fire.

Could he come back and get rehabbed and still win a major? Sure he could. Lefty won the PGA at 50. Do I think it’s likely, though? He’s racked up a ton of injuries now; that’s taking a toll. I can see him winning if it’s somewhere that small-ball and strategic play are necessary, because I think he can still play a technical game well enough to win. Anything beyond that is probably asking a hell of a lot.

Yeah, the thread is tracking well with CBS’ Coverage of The Woods, er, The Masters.