Iowa makes bold step to attach the funding to the student, not the school. Arizona and West Virginia already have made a similar bold step. 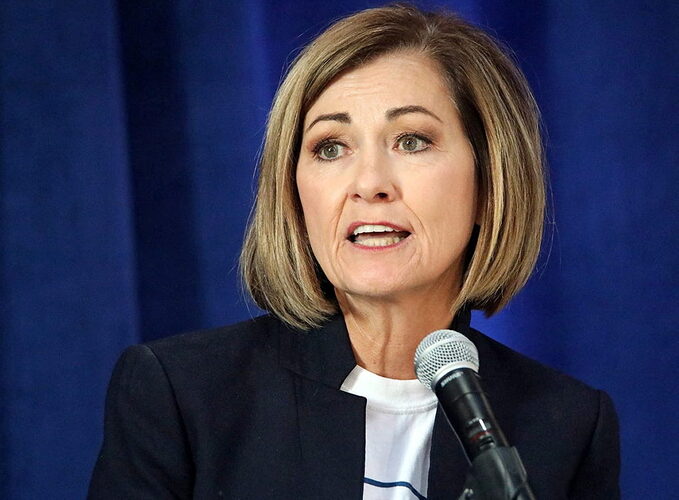 The plan signed Tuesday by Gov. Kim Reynolds makes Iowa the third state to pass a measure that allows such spending with few restrictions.

The “Laboratories of Demcracy” continue to allow for states to make bold decisions to affect their destiny. High tax states are experiencing slow to negative population growth rates (yes I’m talking about you NY, CA and IL). Florida and Texas among others are the choice of destination for these refugees.

I think we would all agree that if a parent wanted to send their child to B, that’s OK (perhaps subject to some minimum standards for B’s non-religious instruction). But should the state pay anything to send students to B, when students at B do not learn the non-religious subjects as thoroughly?

And I think there’s other valid arguments against vouchers. But insufficient instruction in non-religious subjects is not a compelling argument to me.

insufficient instruction in non-religious subjects is not a compelling argument to me.

At least… assuming that all schools are held to the same minimum requirements. If they aren’t then they should be.

And yes, there are many other issues with vouchers, for example special needs children.

Teaching religious beliefs (especially, in the sense that "this is what your should believe) is not (most would think) a legitimate thing for government to spend money on.

That is a much more compelling argument, at least the “this is what you should believe” part.

Religion can be and is explicitly taught in public schools, but definitely not in a “this is what you should believe” way. I took a religion class in my public high school and public high schools I’ve taught at have offered various religious classes above and beyond what my high school offered. And I think in all of the cases I’m familiar with they were electives, although often in a “you must take one of these electives” list.

And religion slips in other places too: history, music, art… even stuff like the science behind the Gregorian vs Julian calendars.

Yes, that’s why my original post about B included “on religious subjects, including that the beliefs of a particular religion are true”. There are some things about what various religions think that can be taught in public schools now.

The gist of your first post seemed (to me) to be that the students at B weren’t getting enough instruction on non-religious topics.

I do think there’s a case to be made that if they’re teaching that their brand of religion is true then there’s a potential separation of church and state issue.

But I certainly follow the logic of why it might be problematic to issue vouchers to religious schools.

I went to a university (BYU) that mandated taking some religion classes that were in the vain of “this particular religion is true”.

People could get Pell grants and other government funding to attend. Is that not the same as the funding being paid for a religious high school that’s meeting the requirements in other areas?

Are the private schools required to accept all students if the take public money?

School choice is just a nice way to say screw the poor kids.

People could get Pell grants and other government funding to attend. Is that not the same as the funding being paid for a religious high school that’s meeting the requirements in other areas?

Good question. And these issues do not always have clear-cut answers. For example, I don’t know what percentage of students chose BYU because of they want to study Mormonism or because of other factors. Nor do I know to what extent parents choose religious schools because they want their students to learn that religion vs thinking they will learn English better there (or because their children won’t associate with heathens).

At least in the case of Pell grants, they are needs based, which makes them more acceptable in my opinion.

Also (IMO) there’s no reason to think public colleges are being hurt by some students attending BYU. There are issues with public schools being hurt when funds go elsewhere, especially if the remaining students have greater educational needs and hence a higher cost to meet their needs.

Kids have little or no choice as to where they go to school.

I don’t know what percentage of students chose BYU because of they want to study Mormonism or because of other factors.

I don’t know, either. But a friend was interested in BYU for grad school due to its academic strength, and decided against it because of its Mormonism. She would have had to pledge not to drink coffee, and maybe some other stuff that she wasn’t comfortable with.

It’s certainly more about control than it is about teaching religion, just like any other time conservatives use religion as a reason for shaping policy.

I’ve had a theory that part of the reason so many college students are graduating with near-crippling debt in the US is that our funding mechanisms are removing incentives for colleges to control their tuition levels.

I wonder if that sort of thinking should be extended to private schools in school choice scenarios.

Are the private schools required to accept all students if the take public money?

Plans vary, but for K-12 the ones I’ve seen do have this feature, yes. I certainly couldn’t say for all voucher programs. (Obviously colleges don’t do this.)

Some do have other restrictions though, such as the parents must sign a contract agreeing to volunteer and/or make themselves available to supervise / assist with homework at least X hours a week. And some require school uniforms which is an added expense.

Another common (but not universal) feature is that if they accept vouchers then they can’t charge additional tuition above and beyond the voucher. In practice this kills eligibility for the elite private schools that are charging a mint and won’t give that extra money up. But the religious schools, that are subsidized by donations to the religious organization, can afford to charge only the amount of the voucher.

I think both of those conditions are considered good features to have. I would certainly argue that voucher programs ought to have both.

The school I teach at is a charter, but it looks and feels essentially like a public school. A bit smaller than my high school, and there is a dress code, but other than that it seems like the same basic experience.

There can be some differences in what sort of special ed is offered. The school I teach at does have a fair amount of resources, but from what I understand, the public schools have a way higher percentage of students that need help.

There’s also the bus situation. The school my older kids go to is about 15 minutes away with no bus option. The one my youngest goes to is closer (actually, it’s the closest school to our house - the main reason we went with it) does have a bus option, but you’ve got to pay for it. Ferrying kids back and forth takes a lot of planning and effort. It’s gotten easier since my son started driving though.

It is nice to have options, since we have the ability to navigate all of the stuff other than cost that goes into sending kids to whichever school we want. A lot of people don’t have that ability, so they don’t really have much option other than the public school - even with the voucher.

Another side impact: when I was a kid, all of the kids in the neighborhood went to the same school. There was a common experience that helped form friendships with people who live near you. The kids around us now go to 5 or 6 different schools. It seems to be a bit harder to get the same sorts of friendships built.

School choice is just a nice way to say screw the poor kids.

Yet poor black parents are often the ones clamoring loudest for it.

A lot of private schools in my area are religious - X Catholic, Y Christian, etc etc

Do you think that by these schools teaching a single religion, they are implicitly teaching that their religion is right and my religion (or lack thereof) is wrong?