My 14 year old cat died alone, hopefully peacefully (Mr. NA said he looked peaceful, like he had just fallen asleep. I couldn’t bring myself to look at the body), under my son’s bed in the last day. I had just taken him to the vet this past weekend. It was likely too much for him to handle.

He was a great cat. And the only pet I ever had who was mine only. I got him as a kitten stray before I began dating my first husband.

I will miss him. He was always good for a snuggle, and loved to sleep with me curled up at my side.

This is the second pet we have had die of natural causes at home. The first pet suffered and I really regretted not taking him in to put him down. This time, it feels less painful than watching him pass in front of me. I’m still grieving the loss, but it doesn’t come with any guilt. He had a good life.

Condolences on your loss.

Very sorry for your loss, NA.

Sorry for your loss NA

We got this good boy at the Humane Society in 2013. He was a doxie-terrier mix that had been loose on the streets in Milwaukee during the coldest parts of the polar vortex. Mrs. Hoffman saw him on the local website, and it was I DON’T WANT HIM, I … just want to go see him, I want to know what he’s like. She was such a liar, it was love at first sight for her. I think the Humane Society named him Chester. We named him Elliott, and he quickly endeared himself to everyone in the family.

Over the next 8 years, Elliott found a spot on our bed (even though I said he couldn’t sleep on the bed with us and it was I PROMISE, THIS WILL ONLY BE FOR ONE NIGT, THIS WON’T BE A REGULAR THING - again, Mrs. Hoffman was a liar) and a spot in everyone’s heart. He went on trips with us, got to run around at her mom’s farm, killed a handful of rabbits and birds and voles and such, cleaned up food that hit the floor, became a companion for my cat, and was patient and calm with her nephew and niece as they were growing up and wanted to play with him.

He developed a hernia a few years back. Because of his estimated age, it was deemed inoperable but as long as we could push it in and things would be fine. A week ago, Mrs. Hoffman went back to stay with my dad and take care of him and take notes so we could figure out what we’re going to do with him, and she took Elliott with her - partially because he always has separation anxiety from her, but partially because she felt this need for him to go with her. Yesterday, we hit the point that we couldn’t do that, and we decided that when that time happened we wouldn’t prolong it and have him be miserable.

She’ll put him to sleep in a bit, and we’ll bury him at her mom’s farm where he loved to run free. 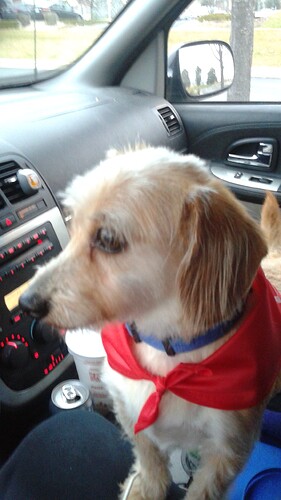 Sorry for your loss. Sounds like 8 good years though.

Sorry for your imminent loss, glad Elliott had a happy home for 8 years, and will be buried in a place that brought him joy.

We put our weimeraner down a month ago. House is still empty. At least once a day I do something expecting them to be there. Put some peanut butter on toast, go to tear off a piece because dog always got first bite, stuff like that. I’d like to think I’m pretty pragmatic about animals, but pets, they’re more impactful than I’d expect. And this dog was a really really good dog; fun and good natured, well behaved.

Now we’re having continued discussions about getting another one. On one side there’s me. On the other side, SO and both kids.

Thanks. 8 years was great. Not long enough, I was hoping we had a few more, then I think he could have frozen to death alone and unloved in Milwaukee and how happy he made everyone and how happy he was to be loved. Every pet should have that.

Adding to this after talking to Mrs. Hoffman this evening: she stated that of all the dogs she’s had as pets and been around as someone’s pet over the years, Elliott was the best dog she’s ever had. He was just a good dog, didn’t cause problems, was incredibly patient with kids when they aggressively petted him and pulled on him and so on. When she was hurting, he knew and would come curl up on her lap. When she had bad dreams, he always seemed to know and would curl up beside her. That’s what makes this so shitty and painful for her.

on this day, 25 years ago, my maltese dog, the inspiration for ao fan was born. she died just 5 short years later in august, 2001 after I moved out of my parents house. I always said if I left my parents house she might die from sadness (I was her favorite and she’d freak out any time I left for a second) AND THEN SHE DID! 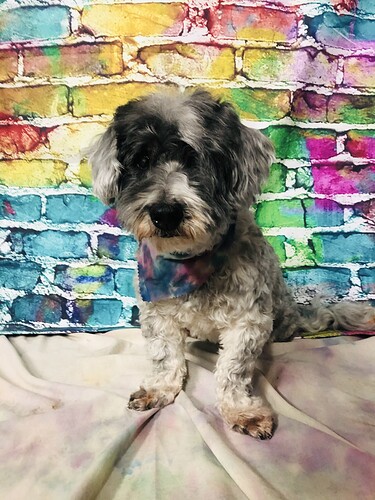 This guy was adopted 11 or 12 years ago. He followed me constantly. When I traveled, hubby said he sat by the door all sad until I came home. We had recently started calling him Old Man.

I am not usually emotional, but today I am sitting at my desk trying not to cry. I think I’ll open a spreadsheet or something.

Sorry for your loss. He looks like he was a very sweet boy.

So sorry for your loss.

:bighug: sorry for your loss.