Interesting article about QAnon from a game designer’s perspective. I don’t think that I know anyone who has gone full on QAnon, but some of the key phrases sound really familiar. Will the chaos surrounding the election result in more converts? 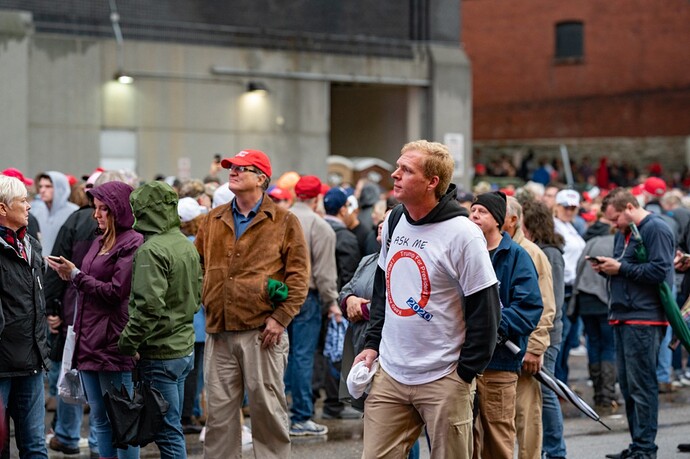 A Game Designer’s Analysis Of QAnon

Do your own research means. “Don’t trust other people. Don’t trust institutions. Listen to me.”

About the best bit of insight from the article. A rather subtle form of (sub-)intellectual bullying in that it often has as an implicit assumption of “if you don’t come to the same conclusion(s) as I did, you didn’t do your ‘research’ correctly.”

I don’t countenance anything that this group–and ones like them–are advocating. But I’ve seen that phrase (or variations of it) thrown out by folks who tend to take on an extreme passion about a topic that is often found to be controversial.

Yes, I’ve heard “do your own research” and “follow the money” quite a bit. I would not be surprised if “open your mind” is also a QAnon catchphrase.

Interesting article about QAnon from a game designer’s perspective. I don’t think that I know anyone who has gone full on QAnon, but some of the key phrases sound really familiar. Will the chaos surrounding the election result in more converts?

What a great article. Thanks for sharing.

Great article, thank you. I’ve heard “do your own research” or “look it up” type directions out of the white nationalists racists I’ve interacted with for years (decades?).

One of the things I do for entertainment is watch televangelists. I’ve been watching them since the 1980’s. I am fascinated by the way they speak, such as the words they use, the cadence, and the way they convey their message. At its core the message is ridiculous. Give me, a multimillionaire, your hard earned money (the more it pains you the better) and you will get rewarded in a fashion that is totally immeasurable. They are taking ownership of people’s future good experiences and selling them back at a premium. The article gives me a better feel for how this works and ties in why all of the QAnon believers felt so familiar to me.

The article is all well and good, but people reading it are the wrong audience.
And, “Rabbit Rabbit”? With a name like that, obviously he/she/they doesn’t want us to believe the truth!!

I think it’s good to better understand how people are pulled into QAnon though. Assuming that they’re just stupid is not particularly helpful. Besides, can you think of any article that would be effective in pulling an entrenched QAnon follower back into reality?

Beyond the specifics on QAnon, which is clearly an extreme example, I think the article also has some interesting ideas about how humans filter through information and piece together their belief systems in general.

I don’t think that the insight applied only to QAnon, though. Any particular “extreme” group can be formed in this fashion.

Interesting companion to Social Dilemma, where one of the eye popping tidbits was the Stanford class on “how to manipulate people” . Literally teaching how to use neurology to get users to do what you want them to do.

In 1984 Orwell imagined the government would force everyone to watch their propaganda constantly and never would allow the citizen to turn it off. This was envisioned as a form of mind control. In 2020 we voluntarily do this to ourselves. The world is an interesting place.

“Voluntarily” except we use social media, and the algorithms decide what we get to see.

I am not worried about you. You are presumably an actuary. That means you are in the top 10% skilled critical thinkers in the United States. At least 9 out of 10 people are anywhere from less able to critically think than you to totally unable to critically think. From my personal experiences I would imagine that about 1/3 of the adult population is totally unable to critically examine their beliefs and another 1/3 is unwilling. Since people like you and me make up 1 out of every 10 people we are far outnumbered in a Democratic society. Our governing fate is tied to the masses and the masses are becoming increasingly hostile due to things like Qanon. These are issues that really cannot just be blissfully ignored.

And yet, here you are.

Some points on QAnon and unintended consequences of our society.

Note: I said unintended consequences in the intro. It is not the intention of those that shape society to create the weaknesses that are so intentionally being manipulated to drive propaganda and a self reinforcing insulated set of beliefs such as QAnon.

Bingo. It matters not that one smart guy is not using social media. The problem is the billions of people worldwide that are using it. I know it’s hard not to focus on our problems in America, but we aren’t the only place in the world dealing with these exact same kind of problems.

On the old AO I was doing my part in my sig line: “Facebook is a toilet.”

Pretty sure I saved the world with that.
No sig lines here. Another reason this site’s format sucks.

There are sig lines. You have to flip a button in your settings to see them.