Not annoying, WTF, or even all that cool, but let's talk about it anyway 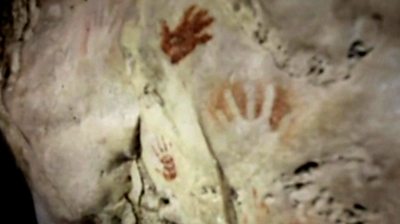 The handprints found in a cave in Mexico are believed to be part of an ancient Mayan ritual.

Why is it always “associated” with some ritual, and never just “some kids got some paint and had some fun”?

In 500 years will someone find our work from Kindergarten and talk about the ritual of pasting cutout handprints onto colored paper and using them to make icons to our turkey god?

Why is it always “associated” with some ritual, and never just “some kids got some paint and had some fun”?

This one has good reason to be considered as part of a ritual, though that video left out the main hints as it just had a guy stating the colors and what they likely meant, which would be a stretch.

To start there is a famous cave spot in a nearby location called “Lol-tun”, just outside a town named “Oxkutzcab”. I have been to Oxkutzcab (osh-coosh-cawb), and I don’t recommend it, but it gives great access to this cave along with close access to the BEST Mayan ruins you can ever explore - Uxmal.

Anyway, this other cave is interesting as it has human activity dating back over 7,000 years. There are many bones of various animals in here including bison, deer, wooly mammoths, camels, horses, and a giant ground sloth. Inside there are tons of cool rock formations such as hanging emeralds and columns that when you hit them make distinct musical sounds. There are also tons of paintings and scultpures, including Olmec statues and then later Mayan ones.

Included among these are two depictions of the underworld. One a warrior that pre-dates Mayan times that is thought to be guarding the passage to the underworld. And then there are paintings referencing the Mayan underworld (Xibalba). The reference to the underworld is not surprising as these references are scattered throughout the Mayan world when it comes to these caves and cenotes (mini-lakes within caves that go down deep to an underground river system - basically bottomless).

Within these paintings in the Loltun cave there is a dichotomy. One area has paintings with different human figures, various animals, plants, and other scenes. But in one section that is represented by the entrance to the underworld the only paintings are either black negative handprints (so hands placed on it and then black paint goes around the hand) or large black faces. There are about 90 of these handprints in Loltun. Interestingly, there are a number of six-fingered handprints here as well.

So now back to the cave in the OP. This cave is part of the same cave network (I think the largest such cave network in Yucatan?). Within this new cave there is also a carved image of a face and six paintings making reference to Xibalba. In this new cave all of the handprints are of the size to belong to individuals who would be coming of age. The meaning of the black and red colors are hypothesized by that researcher as far as I am aware, but seems fine. Because of the size of the hands and the underworld references there, I think I would probably call it coming of age ceremony, or a ritual, or a celebration, or a rite of passage, or something along those lines. But given the other imagery and what has been found in nearby caves this is not likely to be just some kids playing around.

TL;DR visit Loltun and Uxmal for once in a lifetime experiences that are way better than a guided tour of Chichen Itza or Tulum for the millionth time.

Full disclosure - I didn’t actually watch the video, I just read the blurb. Mostly I wanted to play with the question of what our descendants are going to think of all of the weird things we do, and what they’ll ascribe them to.

This seems like as good a place as any to bring up a topic that probably doesn’t deserve its own thread:

Bill and Melinda Gates are divorcing after 27 years. They will both continue to work at their foundation.

I’m slightly surprised that they’re calling it quits after so long. Hopefully the foundation doesn’t suffer. I assume this is something that’s been privately brewing for a while and we’re just now finding out about it, but I only know what’s in the papers.

I was surprised at this too, especially since they’ve been together so long and have the means to effectively be divorced anyway. I can only imagine the cost/complexity in even having a divorce. But yeah agreed it must have been brewing for a while. My dad speculated Bill wants a girlfriend.

Or that the girlfriend he already has wants to be out in the open.

WSJ reported that Melinda started talking to divorce lawyers around the same time it came out that Bill had connections to the pedophile sex trafficking guy, so I’d imagine speculation abounds now.

There were rumors that there was a rumor, but that was just bullshit.

Click the sparkly microphone, and other icons that pop up after it.

I saw a tweet from the NYTs today and it was all about trying to cut back on the amount of screen time we all use, especially in light of WFH, hybrid schooling, etc. So you can get more tips for mindful living by signing up for texts?