Somewhere in the $200 range.
Must work with Spectrum Internet. (Maybe it will prevent outages! Yes, I am concerned, as the wires coming in to my home are 20-40 years old.)
Got about four internet phones or gadgets in use at any given time. One infrequent gamer. Personal PC and work PC are hard-wired via ethernet. One day, a new printer will be connected, which I hope both PCs can print to.
What say GoA experts?

I was about to say, why so much money? looked back at the last router I bought on amazon. It was $56 when I bought it in november, 2018. now it’s $279. wtf on that inflation??? it works fine, but there is no way I can recommend a router that kind of ridiculous inflation in only a little over 2 years.
Amazon.com: NETGEAR N750 Dual Band 4 Port Wi-Fi Gigabit Router (WNDR4300): Computers & Accessories

i have spectrum internet.

and the reviews are mixed. yeah, don’t spend $279 on that bullshit.

Until the GoA experts arrive, I’ll opine…go to BestBuy. The team member in the blue shirt will help you out.

Just find something with good reviews. Pretty much all you care about is having decent wireless coverage, and that’s hard to judge really. Other than that, routers pretty much just work (as long as they’ve got decent reviews).

It’s not the router that should be connecting to spectrum; that’s the modem (you likely have modem->router, not an all in one) so likely isn’t relevant. If you’ve got both in one unit, I’d seperate them.

They will be separate. Current router is a Verizon-only Modem+Router.
Thanks, expert!

I use the Google WiFi mesh routers: https://www.amazon.com/Google-Wifi-System-Router-Replacement/dp/B08GG9CMLR/ref=sr_1_3?dchild=1&keywords=google+router&qid=1610726207&sr=8-3

I have a ~2,700 sq ft 2 story home and it covers my home just fine. I love that I can have one wifi network throughout the entire house. The app is decent - it tells me what I need to know and has lots of functionalities I don’t use like pausing internet for specific devices at set times.

The main downside is that each unit can only have 1 ethernet cord coming out of it. So you can’t hook up a PC and a printer to one hub for example.

I’ve had it for almost 2 years though and don’t have any major complaints.

Wireless router? Try Costco they have a variety of routers at good prices. We went with Netgear Nighthawk last summer. Has good coverage and speed for our house. Forget which model though hey had several. I think we went with the “mid grade “ one they had in stock. It has 2 additional hubs we put on either end of the house to boost speeds. I believe the total cost was around $179 at the time.

I don’t think that is the one I got, but at the beginning of the pandemic, I got a new router from Costco, between $100 and $200 I think. Seven people running 4 chromebooks, 2 computers, 5 phones on 200 Mb Spectrum thru it. No problems. If you start to get disconnected, it is your cable modem (if you rent on from Spectrum like I do) more likely than not. Got a new one at beginning of pandemic, then needed another at November.

We have google mesh, and we do use the restrictions on specific devices at specific times, but I had never noted that I could use an ethernet cable with the hubs

going to plug in my laptop and see if it gets faster (I’m assuming not though).

We’ve got a deco mesh system, so similiar but without Google monitoring me: 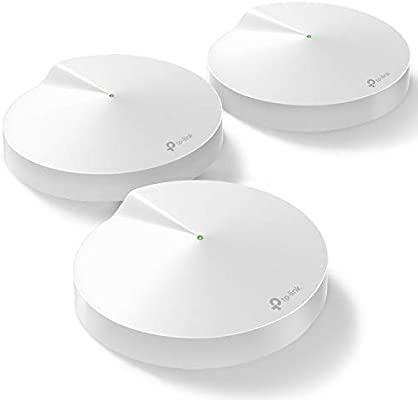 OP, systems like these act as both amplifiers/extenders and routers. i.e. you configure one as the router, the others are just extenders.

Anyway, they’re great systems if you’ve got slow/dead spots in the house.

I ma going to piggy-back on this thread. I have pretty shitty service at my house. It doesn’t seem to matter if I use AT&T or Spectrum (only 2 options). But I have always used the provided 2-in-1 modem and router. So this thread has me thinking maybe I should make a change and get my own instead.

Obviously the router discussion is covered. What about a modem? I have AT&T right now if that matters.

You might need an AT&T-approved Modem. Maybe not. If not, you could get an both-in-one black box, means one less required plug in the power bar (I’m at my limit with a separate modem and router; with printer, two external drives and PC).

It’s probably overkill for OP’s needs, but a little over a year ago, I switched over to using Ubiquiti gear, with the main router being a Ubiquiti Dream Machine. Prior to that I had used one mesh router that needed to be rebooted daily, or a non-mesh system that provided poor coverage to the far end of the house.

In terms of a modem – the combo modem/routers provided by ISPs generally have some issues. When we upgraded to gigabit cable with Comcast, I got a Motorola MB8600 modem which has behaved well. I made the selection based on working through an ISP-generated list of compatible modems and reviews.

All pops and buzzes, bro.
Anywho, got the router at Costco, hoping to set everything up right now.
Issue: I had a few home boys over for Scotch and Irish Whisk(e)ys and local brews, and it’s dark outside where I have to connect the new cables (which are actually a lot older) to the coax that run throughout the house. And the box with the five-way splitter and all the cables is on the south-facing side, and is pretty brittle and there are a LOT of cables to push inside before shutting it. Wish me luck!

I installed an Orbi Mesh wifi system several months back at my house and it’s great.