I have these Spanish tiles. Be a shame to cover them.
Also, I have this “one roof for two floors” style, so the roof closest to the current pool heater is at the apex. Means pumping the water way up there or all the way to the front of the house. (Yeah, excuses.) I’d just like someone to figure out what’s wrong with the current heater and fix it instead of defaulting to, “New heater, plus a new gas line, that’ll be $5000.” (New, fatter gas line is some regulatory thing.)
Gonna guess “less steps” on that exercise note. You can walk for miles and not get tired, but the repetition causes joint pain (possibly exacerbated by poor-fitting shoes). With stairs, you’re done in less time because it’s more tiring. I go up and down our flight a good six times a day.

On the exercise side, I found climbing stairs to be less stressful on knees than walking/running. I have no explanation for why.

I can see climbing stairs be less stressful on knees, it’s basically doing lunges. However, going down the stairs are terrible for knees, so unless you have a stairs master or use the elevator down, would not advise.

But I don’t have any of this “actuary money” that you speak of. It is used for paying off various loans

Not since the pandemic. Used and new equipment for home use is rather scarce. Maybe it’s back to a normal level by now, though.
I agree with the advice, though. Used clothes dryers/hangars (unused equipment) are a good find.

Treadmills are the best piece of equipment, bar none. they are I think the most used piece of equipment. Less chance of them becoming a drying rack.
Our treadmill has well north of 10K on it. My SO and I use it almost every day, I’ve trained for numerous half marathons on it, and my daughter used to use it daily when she still lived here. We’ve replaced the deck and the belt I think 3 times.
+1 for treadmills.
They’re also just a nice break. Crank up spotify and zone out for an hour.

Not sure where you are, but it’s 77 and sunny outside right now. And the local weather expert is predicting we’ll have a drier than normal season, too. Bad for water tables, good for outdoor exercise.
If I lived in a rainier (or a Rainier) area, sure, I’d buy an indoor treadmill.

What model, now that you’ve made me curious? I expect the replacement parts are both easy to get and easy to replace?

It’s a bodyguard T260. The warranty has been outstanding, 10 years IIRC. and we used the warranty quite a bit given how much we use the treadmill.

Where I am, rain, not so much. Here’s what I see out front: 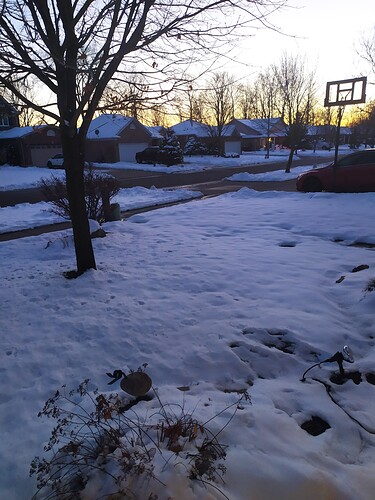 Like I said, I have no explanation, but I didn’t have any knee issues going both up and down stairs, while running on treadmill or outside in moderate hills gave me pain. I had built up to about 500m a day. Took about 45min in total. Much harder to do at home.

Could be the surface. Sidewalks, unlevel surfaces, etc. My stairs are carpeted, so much nicer on joints.

I haven’t been keeping up with exercise; I know I should be better about it.

I was looking into what to do about a light case of Achilles tendonitis, which I got from running an hour a week and walking a bunch more on top of that. The recommendations I found were to do resistance training targeted at that joint, like calf raises. Stair climbing might be doing something similar, strengthening joints. (No more than every third day, if you’re trying to build up tendon strength, since tendons take a bit longer than muscle to recover.)

I get infusions fairly often, and working from home I’ve just been getting them while working. Interesting observations:

Had to get a doctor’s note to get poked at that range, it seems taking meetings while actively being stuck spikes me quite a bit.