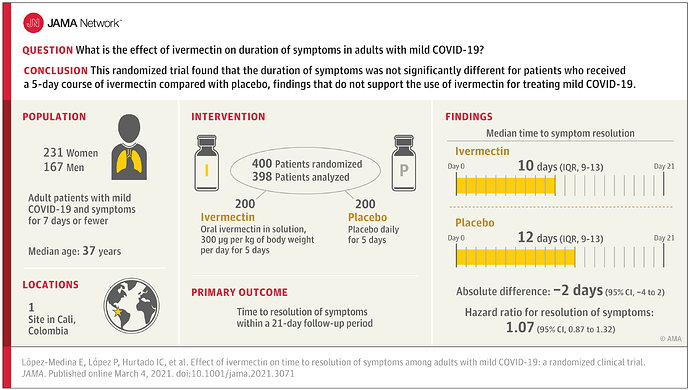 Effect of Ivermectin on Time to Resolution of Symptoms Among Adults With Mild...

This randomized trial compares the effects of ivermectin vs placebo on time to symptom resolution within 21 days among patients with mild COVID-19.

Question What is the effect of ivermectin on duration of symptoms in adults with mild COVID-19?

Meaning The findings do not support the use of ivermectin for treatment of mild COVID-19, although larger trials may be needed to understand effects on other clinically relevant outcomes. 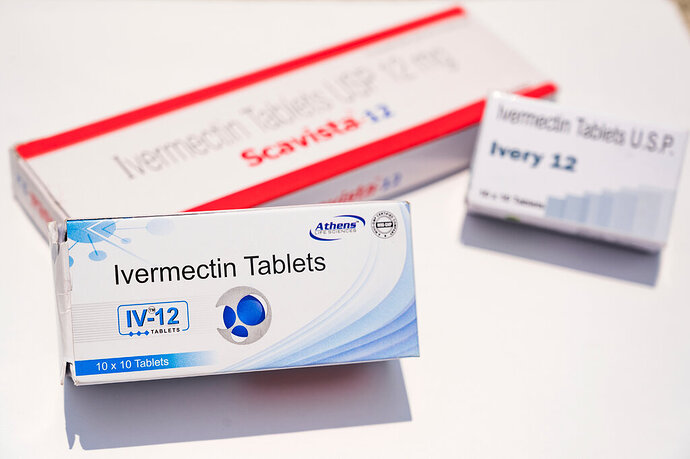 Demand Surges for Deworming Drug for Covid, Despite Scant Evidence It Works

Prescriptions for ivermectin have jumped to more than 88,000 per week, some pharmacists are reporting shortages and people are overdosing on forms of the drug meant for horses.

One of the largest trials studying ivermectin for Covid-19 treatment, called the Together Trial, was halted by the data safety monitoring board on Aug. 6 because the drug had been shown to be no better than a placebo at preventing hospitalization or prolonged stay in the emergency room. Dr. Edward Mills, a professor at McMaster University who led the study, which enrolled more than 1,300 patients, said the team would have discontinued it earlier were it not for the level of public interest in ivermectin.

“The data safety person said, ‘This is now futile and you’re offering no benefit to patients involved in the trial,’” Dr. Mills said.

Is it possible this has a benefit? Sure. Has it conclusively been demonstrated yet? No. Are people ingesting a safe, reasonable amount?

If we want to discuss whether Ivermectin works, Rickson kicked off a thread elsewhere. Otherwise, I’d just like to discuss the notion that a judge should tell a hospital to use an unproven drug for what might well be a futile case.

Otherwise, I’d just like to discuss the notion that a judge should tell a hospital to use an unproven drug for what might well be a futile case.

Yeah. I think the issue here is that a judge is ordering a hospital to follow the treatment advice of a doctor they don’t have a relationship with (doctor doesn’t have admitting privileges). There are a lot of quacks out there, and i don’t think other doctors should be forced to administer drugs that they aren’t, themselves, comfortable administering.

Will a Catholic hospital be forced to perform abortions? Will respectable hospitals be forced to give inpatients extract of peach pit instead of traditional cancer drugs? It seems like judicial overreach to force a hospital to go outside its standard of care.

Doesn’t the hospital usually continue to allow you to take prescribed medication when you are admitted? Even if the prescribing Dr doesn’t have privileges at the hospital? I guess it would depend on whether the medication conflicted with the treatment. Which might be what the hospital is objecting to.

I don’t think he was taking it beforehand, so this would be a new medication.

My experience is that they often switch what you are taking to something comparable in their standard formulary. My mom is on a lot of drugs, and has been admitted to a couple of different hospitals several times in the last two years. I’m her healthcare proxy, and more on-top of her drugs than she is, so I’ve had a lot of conversations with hospital pharmacists. She’s actually on an unusual drug, and I’ve explained to several pharmacists what it is, what it’s for, and what a suitable replacement would be while she is hospitalized.

Her pcp has admitting privileges to one of those hospitals, and they did say that if I brought in a supply of that drug, they would administer it. That wasn’t an option at the other hospital.

A friend whose wife recently died of cancer and went to different hospitals then my mom reports that he had the same experience – every time she was admitted she ended up on slightly different drugs.

My experience is that they often switch what you are taking to something comparable in their standard formulary.

This has been my experience with my wife and my father, to add anecdotes from multiple hospitals/states.

Lemme Bones that up for you:

Dammit twig, I’m an actuary, not a doctor!

Is it possible this has a benefit? Sure. Has it conclusively been demonstrated yet? No.

In one of the other threads I mentioned that Invermetcin had come up during my wife’s telehealth appointment for her breakthrough case of COVD / development of long-haul COVID syndrome.

The above comment pretty much aligns with the gist of my wife’s doctor’s commentary: they don’t exactly have a lot of tools known to help; this one might, but considering the uncertainty, they’d want the patient’s buy-in first (and presumably they’d prescribe differently than veterinarians would).

Edit: I’ll also note that before folks write off this doctor as a quack because she dared to mention Invermetcin…my wife has other chronic, “difficult” health conditions. One of the reasons my wife transferred to this particular practice is that there are a couple of doctors there willing to look at treatments that might be described as “possibly beneficial, but studies haven’t shown a clear benefit” or “beneficial for a few individuals, but not enough to support broad use”…because that’s what my wife needs for some of these condtions.

I don’t have time to dig through analogous cases, but I would suspect that what we typically see is that the patient wants X treatment and the hospital / doctor in charge says “nope” and there’s a fight over it, but in those instances the doctor in question is admitted and so it’s really a patient vs. doctor thing and the hospital is standing behind the doctor. I don’t know how often we get a non-admitted doctor trying to dictate treatment and the patient sues the hospital for not listening.

I don’t know how often we get a non-admitted doctor trying to dictate treatment and the patient sues the hospital for not listening.

In those cases, I would expect the patient to seek transfer to another facility willing to work with the non-admitted doctor, assuming the patient’s condition permitted transfer.

I’m unfortunately familiar with a couple of cases where transfer was sought because of somewhat analogous quality-of-care concerns.

I wonder if “the court made us do this” would be an effective defense in any malpractice/liability suit arising from issues caused by the treatment in question.

I wonder if “the court made us do this” would be an effective defense in any malpractice/liability suit arising from issues caused by the treatment in question.

I can’t imagine how that is not a valid defense. They clearly tried to not administer the drug. It would be chilling if that wasn’t the case.

I don’t know how often we get a non-admitted doctor trying to dictate treatment and the patient sues the hospital for not listening.

I didn’t get the sense that this was the case here. When I first saw this story, it seemed more patient vs doctor/hospital on wanting to try treating with ivermectin. I thought the non-admitted doctor was a “second opinion” who was willing to prescribe it.

Either way, it kind of seems like this is a “hail Mary” attempt to do something where the hospital/ICU doc is sticking to the “first, do no harm” part of the Hippocratic oath & not wanting to be the one to do a thing that would push the patient over the edge, while doing nothing is likely to be equally fatal.

Reminds me of when a family member was dying in the hospital years ago. The ICU doc was trying to get/keep them stable & convince a specialist to do a certain (invasive) test. The specialist refused because the test might kill them, to which the ICU doc loudly replied, “They’re dying anyway if we don’t figure out what’s going on!”

Agree with your earlier post that this thread should focus on the interesting aspect of this case with the judge overruling the hospital & forcing it to work with a non-admitted doc of the patient’s choosing.

I can’t imagine how that is not a valid defense. They clearly tried to not administer the drug. It would be chilling if that wasn’t the case.

I agree that it’d be a valid defense. I’m more concerned about whether it would be an effective defense. In some courts/with some juries, there can be quite a difference between the two.

That’s what jury instruction is for.

Actually it’s hard to imagine it even getting past a grand jury.

I wasn’t aware that grand juries were involved in civil suits.

(My concern isn’t with the miniscule threat of a criminal case. I’m concerned about the claim against the hospital’s professional liability coverage.)

I was wondering if anyone experienced in med mal would want to comment on this (maybe you have worked in med mal, Kevin? I don’t remember)

I haven’t directly worked with either med mal or hospital professional liability, but exposure to HPL does factor into some of the work I’m doing now.

So I’m not familiar with the ins-and-outs of the liability issues here; I’m just aware of the general high-level trends and other ugliness of that kind of exposure, as well as the vagaries/craziness of US civil courts in general…which is why I made that comment.

Fair enough. I’ve never been a juror on a civil trial, but I believe the judge can still instruct the jurors on what the hospital can and cannot be found liable for.

That direct experience, augmented by some exposure to civil justice systems outside the US, has fueled my cynicism when it comes to civil courts and juries.

I agree that it’s possible that a judge would instruct the jury in a manner favorable for the hospital (although if that were to happen, it’s more likely that the case would be settled before trial, I think, or this particular question would have been quashed if there were other matters to be litigated). However in some courts, the judges seem rather biased towards the injuried parties / biased against the parties with deep pockets.