So I have this one friend who is a regular pot user in a state where it’s illegal. He was about to get a new job and asked me to provide him a urine sample that he would then take with him to the drug test.

IMO I think drug tests are bullshit, especially for pot. The regular users know how to beat the system, so I’m guessing the ones who get caught are often people who had a fun weekend in Colorado and didn’t have enough time to get it out of their system. (I heard that the stuff tends to stick around for up to 30 days.) IANAL but in most states (including mine) it’s not a crime to help a friend with a drug test, and if I’m wrong I highly doubt anyone would rat on me. As far as I can tell the pot doesn’t make him do stupid things, and he works in an office job so safety is not a big concern.

However, my wife is not comfortable with me being in involved with this, and even told me that she asked him not to turn to me for help. Respecting her wishes, as well as not being happy that this dude would circumvent Mrs. Fleeble, I told him that he should find someone else. The guy is a mason, so he has a whole bunch of “brothers” to choose from. (That’s probably what he did.)

Over the past 2 months, the so-called friend has been giving me the silent treatment. Just last week, his wife texted my wife saying that she wishes I would apologize to him so that we can all hang out again. I haven’t responded, due to the fact that I know, “I’m sorry you’re a stubborn pothead ass and you’re not even man enough to talk to me” is not an acceptable apology.

He’s not a close enough friend for me to give a shit whether or not he ever speaks to me again. Just curious to see if any of y’all would have handled things differently.

Oh and FWIW your “apology” sounds perfectly reasonable to me.

Dude sounds pretty dishonest, both being willing to lie on the drug test but then to circumvent your wife. I think he more owes you an apology than the other way around, not even close…

Of course it’s reasonable, but it’s more from the perspective of feeling sorry for him as opposed to being sorry for my action (i.e., inaction)

In this instance he is being dishonest, but in general he tends to be brutally honest. He just ran into a case where honesty would leave him unemployed, and going around my wife was defiance IMO, not dishonesty.

I guess. People tend to hide dishonesty and you’ve now got a couple instances of it. Maybe you’re just less aware when he’s being dishonest with you.

Looking back at text messages, we actually did hang out after I refused to help him. In fact, his response at the time was, “Just realized I have a Masonic brother who could help :)” I changed my OP to reflect this.

Obviously no indication that he was bothered by it - don’t know why he suddenly got a bug up his ass.

Wait, so you can just bring the urine in a cup to the drug test? Every drug test I’ve ever had I had to do on site, after emptying my pockets and going alone into a single person bathroom.

I had a high school summer job where I had to do a drug test each year, and I’ve had an actuarial job where it was a company wide policy, so I’ve done it a handful of times.

Dwight Gives Michael His Urine - The Office US - YouTube

ETA: not a super SFW Google.

I’ve never cheated on drug tests before, but I think the way it works is that the cheater would wear a device under his pants that would keep the clean urine at the required temperature. Medical facilities have been getting better about detecting cheats but the cheaters stay at least one step ahead.

Obviously no indication that he was bothered by it - don’t know why he suddenly got a bug up his ass.

Guessing someone has provided a persuasive argument against you into his ear.

Also, check to see if your state is one of these: 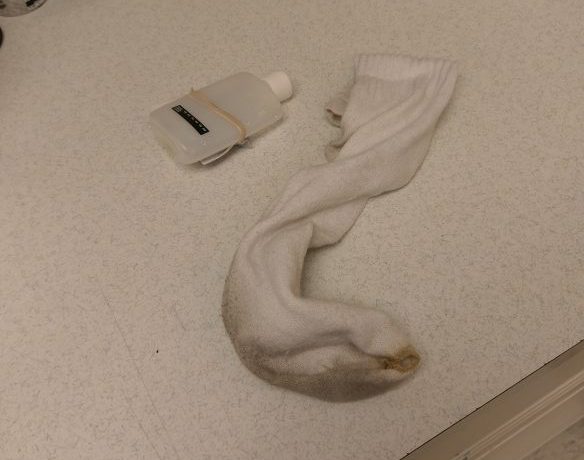 You can be fined or jailed for cheating a drug test in many states Drug test cheating is a problem that won’t seem to go away. As much as 10 percent of

Throw in a slippery slope argument: “What NEXT law will he ask me to break for him?”

Huh. I guess people who need to do this put a lot more thought into this than I do, by necessity.

Now cheating on an FSA exam… that I’ve daydreamed about, but unfortunately the risk/reward isn’t great enough for me to follow through with anything.

He was about to get a new job and asked me to provide him a urine sample that he would then take with him to the drug test.

It’s unlikely that this would work.

I’ve done a couple drug tests. They do a temperature check of the sample, you need to empty your pockets, you can’t flush, and they dye the toilet water.
Some places are stricter than others, and there’s no way to properly know beforehand what their SOP is.

Some people keep the fake sample tape to their groin to keep warmth, but I don’t think that will be warm enough for the test.

both being willing to lie on the drug test

I wouldn’t call that dishonest. Drugs tests are bullshit to begin with. Not to mention pot is legal in so many states and unfortunately is fat soluble so stays in your system much longer than most hard drugs, so to not get a job/get fired over it is completely insane to me.

You can literally shoot up meth or heroin and be clear for the test in two days. Smoke pot once and you can test positive 3 weeks later. I have no idea what the purpose of a drug test is.

I wouldn’t call that dishonest

Of course it is dishonest. Just because you do not like the question doesn’t mean that lying is acceptable. Maybe you could argue the “two wrongs make a right” perspective but you cannot call cheating on a test “not dishonest”

I have no idea what the purpose of a drug test is.

Okay fine. It’s dishonest, but doesn’t speak to a person’s character much. If I’m going to lose my job over something completely benign, then yeah I guess the system would turn me into a dishonest person.

Except there’s no way it can do that, as pre-employment drug tests usually happen within 72 hours of an offer. A person is not going to be doing drugs if s/he even has an inkling that an offer is coming.

The only thing that can still be detected after a week of pausing is weed, which is literally the least harmful substance (not to mention legal in many states) you want your employee to be using, if anything.