Have ovens changed much in the last 20 years?

I got this oven that’s 20 years old or something. Home inspection says it works like normal, so I’m like okay great, it’s an oven, should bake good or whatever, maybe when I decide to cook white people food instead of using it like a dish rack like I did at my last place.

I’m doing some kitchen upgrade and wondering if I should replace it. It is a built-in so if it’s easy to replace those later I was thinking about just replacing it when it actually goes kaput. Is it worth keeping or replacing? Would I gain anything out of a new oven? Does it bake but…bake better?

Not that I’m the cook in the family, but the only things that have changed are the look, and maybe some high end functions like meat probes and convection.
Stove tops, a big innovation is induction, which is what we have.

Microwaves are worth going high end though. Ours has microwave, but also has a heating element and convection, so it’s a second oven. Ours is actually big enough that it gets used as a second ovem.

I actually did a scientific experiment on a closely related topic… 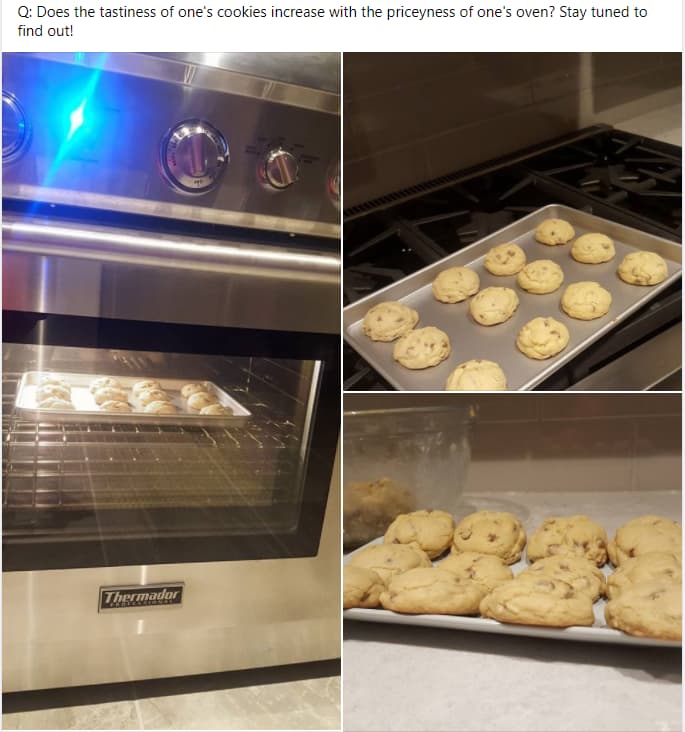 I replaced my oven maybe 15 years ago. There was nothing broken in the old oven, but it didn’t hold a very steady temperature, so it was hard to cook on.

That’s not because it was old. Before that, I used an ancient gas oven with a pilot light that worked fine. It just happened to be a crappy oven.

But the new oven not only holds a more constant temp, it is also a lot bigger inside (same outside dimensions) and it heats up much faster, and it doesn’t heat the kitchen as much. There were clearly improvements in insulation between the two.

I also upgraded to convection, which is awesome for roasting meat. But if you don’t cook in an oven at all, that seems low priority.

Given that you are unlikely to use it much, is be inclined to leave it alone, and only replace it if it actually breaks.

Is it just an oven? Or an oven/stove combination? Or countertop?

If the former, is it a “wall” oven? A dual oven? How big of a turkey can you fit into it? Do you have to cut a ham in half to make it fit?

Single electric wall and I think the cooktop is separate but I’m not really sure. I just know both go into the same cabinet, the oven inside and the cooktop in a cutout on the countertop. 30" wide.

Those are some interesting foods you listed in there, something I’d see in a Charlie Brown cartoon or see in the Grinch Who Stole Christmas.

I would like to make bread but geez the carbs.

Why did Bog have to make the tastiest foods fattening. Why man.

I do a delicious roast duck a couple times a year in that oven. Depending on the recipe, it sometimes tastes a lot like the roast duck i buy in Chinatown.

If not, how do you know if the cookies would be better or worse in a lesser oven?

I agree with much of the above. Older ovens’ thermostats may not be as finely tuned as more current models, leading to inconsistent and unpredictable cooking duration.

If you’re not gonna use the oven leave it be. Whenever you replace it there will be some new bells and whistles, plus time value of money and all that.

Check to be sure it’s a standard size. Ours that came with the house was not. So when it broke hubby made some DIY adjustments to the counters to make it fit. The counter now looks horrible.

Anyway, if it’s not a standard size, I’d replace it now while you are already doing work. If it is standard, then replace later.

So when it broke hubby made some DIY adjustments to the counters to make it fit.

Lol. Curious to have a better understanding of ‘diy adjustements’ to a counter.
I’ve got after-hours access to counter top manufacturing equipment. Without that, I don’t think there’s an effective DIY option.

Depends on if the hole needed expansion or contraction, I guess.

You can’t really cut laminate with home tools. A fact that I think ajstudies can confirm.

Lol. Curious to have a better understanding of ‘diy adjustements’ to a counter.

I’d take a photo but it’s embarrassing. We had a “drop in” stove/oven. It was more narrow than what is now standard. Hubby had to trim the countertop. He did not do a very neat job. And he trimmed too much, so there’s a gap on either side.

It’s annoying bc he can do some pretty nice stuff when he wants. Although he has tremors now so his DIY days might be limited.

If we decide to stay in this house I will hire someone to do what I want. If not I will let someone else pay for that.

Well in their defence, you can’t trip laminate. It chips and flakes. You can’t really do a neat job. I’d never attempt that.
But if that’s the case, find some type of trim and cover the edge. Even if it doesn’t match entirely, it’ll clean it up.
As they say, do your best, caulk the rest. I’ve done some magic with copious amounts of caulking before lol.

I’ve done some magic with copious amounts of caulking before lol.

I’d like to say I’m better than this, but some days, man. Some days you just, uh, need to put some caulk in the hole.

Some days you just, uh, need to put some caulk in the hole.

THAT’S WHAT SHE SAID!!