Happy Easter, to those who celebrate it

(that’s kinda what i said.

Have a lovely and meaningful day, @twig93

Not sure if you’re aware, but on Easter it’s pretty typical for a Christian to say “He is risen!” Then someone else will respond “He is risen, indeed!”

Maybe somewhat akin to “Next year in Jerusalem” but we say it all day long. Especially in the morning. I expect it’ll be said 8 or 10 times in church. When I was a kid we used to count, and it was usually in that vicinity.

Yes, I know that. I nearly wrote that, but decided to let the Christians say it. I intentionally rewrote it as the secular/snarky “Spring has come!”

The resurrection of Jesus is thematically related to other spring/fertility rebirths. Like Persephone returning from Hades, at which point Ceres ceases her morning and cereals grow again. Or Osiris coming to life after his wife gathered up the pieces of his body and put them together (which was associated with the spring flooding of the Nile and the sprouting of grain.)

In addition to the liturgy, Anglicans say that to each other all day long, in my experience. I haven’t heard it as much from other Christians, fwiw.

I went to the chapel at Duke University yesterday and sat beside the 9th station and prayed for everyone. Happy Easter GoA. 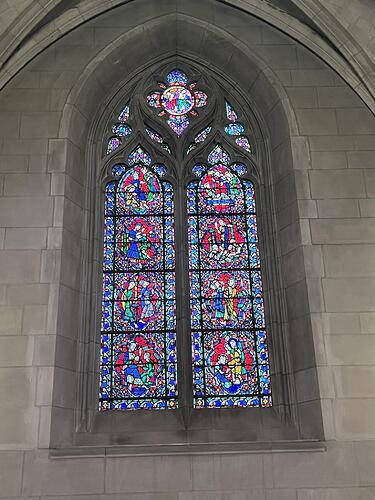 For Passover we drink whenever the service leader says “drink a cup of wine”. It isn’t a much of a game

I think they only get to drink once, at church.

Ohhhhh, right, you’re Jewish. Well you should know that the Real Meaning of Easter is that this is the day Aslan returned from his stoney grave to fight the White Queen’s army, after trading his life for the life of the traitor Edmund (who you may now remember as king Edmund).

I read the Chronicles of Narnia when i was twelve. My mom bought them for me when i had chickenpox. I was familiar with Christianity, of course. I grew up in Christendom, and all my neighbors were Christian. I was certainly familiar with the Christian liturgical calendar, when kids skipped school, or showed up smudged, or talked about family parties. (Or schools were closed, like Christmas.) But in many ways, those books were my first real education into Christianity.

Maybe i should reread that today.

Have a little Bach harmonization - free for anybody.

and have a little Wesley:

on Easter it’s pretty typical for a Christian to say “He is risen!” Then someone else will respond “He is risen, indeed!”

What denomination/church? I grew up Evangelical and this isn’t familiar to me.

Presbyterian, United Church of Christ, United Methodist, Roman Catholic, and Lutheran are the ones I’ve experienced. Perhaps others.

BTW, the final tally today was only 5, which is surprisingly low. But we did have an actual drum roll before the last one.

I think they only get to drink once, at church.

And many Protestants don’t even drink every week… AND many use grape juice rather than actual wine. Presbyterians tend to do communion once a month (first Sunday usually) and I think the UCC folk do too. And on Maundy Thursday, of course, which commemorates the last supper. United Methodists have communion far less than that. World Communion Sunday (first Sunday in October) and Maundy Thursday and maybe only one or two other times all year. Lutherans and Catholics do it every service/mass though.

But we drink outside of church. Jesus is the guy who turned water into wine for a bunch of people who were already drunk. You’ve probably heard me say that my (now former, since I moved away) Bible Study celebrated Jesus’s first miracle every time we met. The pastor who married my husband and me was a career changer, having been a bartender before becoming a pastor. He definitely knew the best beers to get when we were in Africa and unfamiliar with the local choices, and you see a different side of your pastor when you’re kicking back having a beer together.

Or “Christ has Risen, Alleluia!” Since we the Alleluia hibernates during lent.

Lots of candy in the JFG household now.

AND many use grape juice rather than actual wine.

Yeah, grape juice is ritually equivalent to wine. We actually consume a lot more grape juice than wine on Passover. I put out both, people take what they want.