File an auto claim against my son?

During the winter my son got too close to my car in the driveway and rubbed the mirror along the side the car leaving a set of scratches along the left side doors. It’s superficial but noticeable, so I tried using Honda touchup paint and now it’s less noticeable but still annoying. If my car had 134,000 miles on it, I probably wouldn’t sweat it, but it only has 34,000 miles on it and I will have to stare at it every time I get into the car for a long time.

I went to Maaco and told them I wanted a budget estimate - a good job but doesn’t have to be meticulous. That estimate was still over $1,100. I don’t really want my son to pay that, so I wonder if I should file a claim against him and have him pay the increase in insurance premiums instead. We don’t pay a lot for insurance, only $43/mo for both cars, so maybe if State Farm surcharges us it won’t be too much. We only joined with them six months ago.

Just wanted to get some opinions from the actuarial public. I haven’t worked in personal auto for some time and don’t know off the top of my head what a typical surcharge, if any, might occur. What would you do?

Like how much over 1100 are we talking about? It’s really up to you what your preferred risk retention is. If my worldview is correct, insurance is priced so that you’d be just about as happy with either decision.

What’s your deductible. Typical actuaries should have a high deductible, like maybe a grand. Whatever it is, you’re filing a claim not for 1100, but instead 1100- the deductible. Probably not worth it.

My son drove my shiny truck into a snow bank and scratched the bumper/shroud. 1800 to get it fixed, it wasn’t worth putting it through insurance for me.

Wrong first choice: you get it fixed, then you make him pay for it. Doesn’t have to be immediate. $50/month for 22 months, or give him the family discount, 'cause you know his father.
It’s called “learning the hard way.”

Also, go to several places. Find one in the less pricey part of town, where the owner of the business also owns the building and the land. (Lower overhead.)

My deductible is $2,000, but since my son hit me with his beater car, wouldn’t that make it a liability claim that renders my deductible irrelevant? My thinking is that the $1,100 might be considerably more than the impact of any surcharge on a $500 annual premium. The two of us are the named drivers on the policy.

My son spends precious little of his $$ and has well over $30K so it’s not like he can’t afford it.

Exclusions:
For damage to property while it is … owned by … you …
This exclusion does not apply to damage to a motor vehicle owned by the employer of you or any resident relative if such damage is caused by an insured while operating another motor vehicle.

$43/mo for both cars? It is quite low isn’t it? I agreed to let them track me, and I got a discount right away ($55/mo) and the app indicated it was pretty happy with my driving so my auto rates dropped.

That baffles me.
Auto rates have always been over $1000 a year for me.

Then again, I’m a quiche gay who drives a fairly new luxury car. 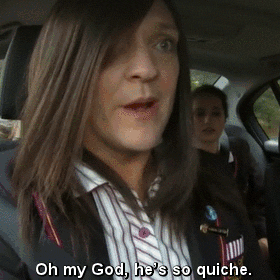 My car is a 2017 Honda Civic and my son drives a beater with liab only (so not much car to insure in the first place) so there’s no deductible on his part to worry about I would think - just some lunar metallic silver paint on the passenger mirror of an ugly car.

yeah I think my collision and comp are the bulk of my premium.

Sounds like you’re getting a good deal on your premium so you might not want to switch insurers, but I avoided a substantial portion of a surcharge on my auto insurance after I got more than X speeding tickets in Y months (think X = 2 and Y = 24 but I’m not positive). This was going to jack up my premium for two years.

Been a while, so I’ll make up the months to illustrate the point.

Got the Xth ticket in March of year Z. Policy is up for renewal in May. Crap… rate is going to go up. Nope!! It’s staying the same. I even get a note that they ran my moving violations on April whatever and there were only X-1 violations on there. Query my cop friend… oh yeah, the departments are slow to update that thing. A March violation will show up in May or June.

So from May of Year Z to May of Z+1 I enjoy the lower premium. In April of Z+1 they check my moving violations again and of course now it’s on there. So starting in May of Z+1 I have to pay the higher premium.

Pay the higher premium from May of year Z+1 through March of year Z+2. It’s now been 24 months & a few days since the Xth ticket.

Get my policy renewal info in March. Due to processing delays they’re now checking for moving violations earlier than they used to. I still have to pay the higher premium for another year. (And I was in my 20s, so it was a lot.) I call and protest: but I haven’t had a single moving violation in over two years!!!

Oh, but since we only charged you the higher premium for one year and we’re allowed to for two, you have to pay it for another year.

Get the lower rate with the competitor. Similar to the non-jacked up rate I’d been paying with the first people. Cancel the old policy immediately and am refunded ~2 months premium.

Dummies… first insurer lost my business over an illogical MO.

Ugh, seriously jealous of those premiums, have 3 kids under 25 on ours and full coverage on 3 cars (need to quote a drop to liability only on two of them at next renewal).

Be older (but not DTNF old, iykwim)

Have a higher deductible and/or don’t buy full coverage.

Sign up for insurer’s telematics program. Don’t drive much but when you do, drive like you’re Lucy old, iykwim.

Pay your premium in full or by EFT or both.

Shop around every 6 months & be willing to switch.

That estimate was still over $1,100. I don’t really want my son to pay that, so I wonder if I should file a claim against him and have him pay the increase in insurance premiums instead.

So have him pay it over time.

I have no idea what the insurance increase would be. They aren’t consistent from company to company, and every state has different rules. But overall, the expense load on p&c insurance is significant. And personal auto is usually priced profitably, overall. So on average, they are increasing someone’s rate by more than what that cost.

I’d ignore it. But i drive beaters. I buy cars new, but typically drive them until they die. If they look like beaters a little sooner rather than a little later, so be it.

But if it bothers you, charge your son. As dtnf suggests, you can let him pay over time. Or, if you really want to teach him a lesson, file a claim, to and if they accept it, let him pay higher insurance for however long it takes, and have points on his record for a few years.

Equally important, does your son live at the same address as you do?

If so, high probably that their policy won’t cover it as a PD liability claim, even if he has his own policy. (IIRC, ISO forms exclude this sort of thing from that coverage.)

Oh yeah, I was thinking he dinged your car while driving it. So my hot take is wrong.

Either way, I think you should also consider the option of paying it yourself, no financial repercussions to your son. I dispute the idea that charging them for this mistake/accident will teach them anything positive.

I agree with this. Generally if the vehicles are on the same policy it would fall under the separate collision coverages for each vehicle. If your vehicle didn’t have collision, then the PD from the other vehicle would cover it. There’s a clause for this somewhere in the loss settlement section of the ISO manual…I think…haven’t looked at it in awhile.

Had a similar issue once where a guy drove his vehicle into his own house. Coll paid for the vehicle but the home policy covered the home damage as opposed to auto PD. Agent tried to reduce the auto surcharge by arguing only the auto portion should count since it’s all that was recorded under that policy. After I told him he was wrong (correctly) he tried to go to my boss’s boss directly and left out the fact that there was damage paid under the HO policy. I caught it a couple weeks later though.

The more I think about it, the more I think it shouldn’t be covered. Suppose I got in an accident and messed the side of my car up and didn’t want to pay my $2,000 deductible. I could just arrange for Ryan to give my car the “mirror treatment” or something more substantial.
Problem solved, no need to pay the deductible since it’s a liability claim now, just take the surcharge instead.
I’m not sure what I’m going to do. It’s not that hideous. Maybe I’ll post some pics later.