I really developed a taste for brie recently.

I don’t think there are any cheeses I outright dislike, but I haven’t tried Raclette and I’ve heard that’s gross.

My favorite cheese varies from time to time. But right now I’m hankering after Cheshire.

Manchego is pretty high up there. Red Witch is also really good. My absolute favorite was Dziugas from Lithuania, sadly the local cheese shop doesn’t get it anymore.

If you looks brie, have you tried Cambozola? It’s like brie with a hint of blue.

I’m very partial to Mimolette, especially if it’s aged 18+ months. And Roquefort if you like a strong blue cheese, though my MIL says it tastes like floor polish. And I like a good cheddar, either fresh or aged.

Hard to pick a favorite, or even several, all depends on the application. I’m focusing here on charcuterie, but for cooking it’s a whole different list I guess.

I’m fond of it. It’s known for being served melted right into a sandwich. Pro tip: put it on scalloped potatoes. Just bake them as usual, and then take the pan out 5-7 minutes early, slap on some raclette, back in the oven for the last few minutes to let it melt in. 10/10.

+1 for Camembert. More flavorful than Brie.

love a baked Brie, but as a fancier pre-meal
Various hard and soft for a charcuterie, like to get a variety
Provolone for a Turkey sandwich
Mozzarella for various cooking, Jack for extra bite
Cheddar/American for grilled cheese
Cream for bagels, with jam on toast
I like a gouda. Munster goes well on bagels

Camembert definitely has more flavor than Brie, but it’s not for everyone, whereas Brie is mild creamy deliciousness. Another one you can try is Coulommiers, which is milder than Camembert, but in the same family.

I’m also a fan of Emmental cheese, which is a tastier (IMO) version of Swiss.

I like Havarti for sandwiches. Gruyere is good for mac & cheese.

Fromager d’Affinois is quite good, softer and creamier than Brie. Great on a good crusty bread.

Growing up Provalone (the good imported block kind not the sandwich slice stuff at Subway) with pepperoni was a staple snack food in out house. But my wife is not a fan of good Provalone which she refers to as “stinky toe cheese”.

Paneer is an excellent Indian cheese that’s pretty easy to make at home and has some great cooking uses with flavorful Indian sauces.

I like most cheese. Can’t really say as I have a favorite as they as they can be so varied and have different uses.

My youngest daughter is not a fan of most cheese but she loves Oaxaca Cheese which is kind of the Mexican version of Italian string cheese. It’s great in tacos, burritos and enchiladas.

My wife and I used to have “cheese board” dinners sometimes but kind of fattening where we’d basically get a couple cheeses, some good olives and a nice loaf of bread. Maybe some honey or quince paste.

When I was young my mother liked to get brunost - a Norwegian cheese with a caramel flavour. I also love Parrano and blue cheese

Brunost is interesting. It’s not technically a cheese, although it’s sometimes called a whey cheese. Instead of being based on coagulated milk proteins, it’s whey that was boiled down until it solidifies, almost like custard only without the thickening agent (egg or starch) that makes custard solidify. So it caramelizes.

I’ve never had it, but it sounds delicious.

I like a sharp cheddar, Brie with pepper jelly is great, havarti is really tasty - that’s a softer cheese.

I like cheese in general, but am usually too cheap to buy the more exotic looking cheeses.

What do ya’ll eat with your cheese? Club crackers? Ritz crackers? Salami?

This whole thread makes me hungry but gotta add one I tried a few years back, stunk up my fridge but so good: 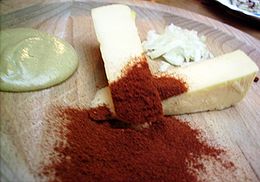 Weisslacker (or Weißlacker) (German for "whitewashed" due to the rind color), also known as bierkäse and beer cheese, is a type of cow's milk cheese that originated in Germany, but is now known worldwide. Also produced in the United States, mostly in Wisconsin, it is a pungent and salted surface-ripened cheese that starts out much like brick cheese. It ripens for seven months in highly humid conditions and is related to Limburger cheese, and has a similarly powerful smell, but paradoxically mild ...

Sometimes we have rice crackers in the house, otherwise I’ll just eat it plain

What do ya’ll eat with your cheese? Club crackers? Ritz crackers? Salami?

I often eat my cheese with bread, or toast, or wasa crisps. Sometimes I just nibble on it straight up.