Isn’t Giant an adjective as well?

a. A person or thing of great size.

b. A person or thing of extraordinary power, significance, or importance: a giant in the field of physics; automotive industry giants.

a. Greek Mythology One of a race of humanlike beings of enormous strength and stature who were destroyed in battle with the Olympians.

b. A being in folklore or myth similar to one of these beings.

3. A gymnastic maneuver in which the body is swung, fully extended, around a horizontal bar.

Sold out. Not sure if I’m glad or disappointed I dragged my feet.

If your shoes are thick enough they make good brakes.

There’s a lady whose kids attend our kids’ school who sold her car and bought a $6k electric bike as a replacement. It has two kid-size seats in the back. I don’t know the brand, but my next door neighbors who are e-bike experts say it’s a really good one. They have a $3k one themselves.

Our son got a Jetson e-bike for kids that goes one speed, I think 15mph. He loves it and takes it to school every day, but will have to quit when it gets too cold because that battery won’t survive the winter being kept outside during the school day.

You have a scooter. My big hang-up is that I have a bike, and a scooter, and I don’t think it makes sense to have yet another vehicle. Are you considering an e-bike?

Nah, I don’t think so. I can do as much or more with my scooter than I could with an e-bike, including carting my kids short distances. But i would rather my kids have e-bikes over scooters or motorcycles when they get older, and I would invest good money for that, so it’s something I’ve given some thought.

I hadn’t really thought too much about getting one for my son. Given where we live, an e-bike is almost as practical as a car when he turns 16. He would want a car from time to time for shopping or whatever, but if he’s just going to hang out then an e-bike would rock.

Bike theft is an issue here, would need a good lock.

Bike theft is an issue here, would need a good lock.

This was one of my hesitations with buying an ebike.

Ebikes unfortunately are a theft target most anywhere as a high value item that can be hard to trace and easily thrown into a pickup or van.

I recommend at least 2 locks: a quality U lock as a primary lock is a must, then a secondary lock to cover other spots (cable lock, chain lock, or folding lock preferable). Frame locks and disk locks are convenient but more easily removed. Can’t hurt to have one too, but wouldn’t rely on it as anything other than a backup.

methinks if supermarkets or other shopping areas had secure parking zones for ebikes/bikes, they’d get a lot more customers

Or rather, a simple chain lock would suffice because it would be sufficiently supervised that someone cutting a chain would get noticed.

A bike that’s not locked up at all is pretty darn easy to steal.

The Atlanta Falcons and Atlanta United have a bike valet area next to the stadium that does exactly this. Another popular market here, Ponce City Market, also has a bike valet. These seem to work well, but the economics likely require quite a few bike riders to make it work. Both these places have that, but I don’t think the typical supermarket in my area usually would.

This new bike looks pretty cool, but is scant on some important details. I’m thinking the stated range is vastly overestimated, but they haven’t announced battery size either yet. I did subscribe for the 50% off launch sale out of curiosity

Your dream ride has arrived! Zectron's sleek futuristic design ensures good looks, functionality and safety. Exquisitely crafted as a uni-body framed bike, Zectron can be comfortably ridden to a long-range like no other bike has ridden before!

Here’s a new contender for me under $2K 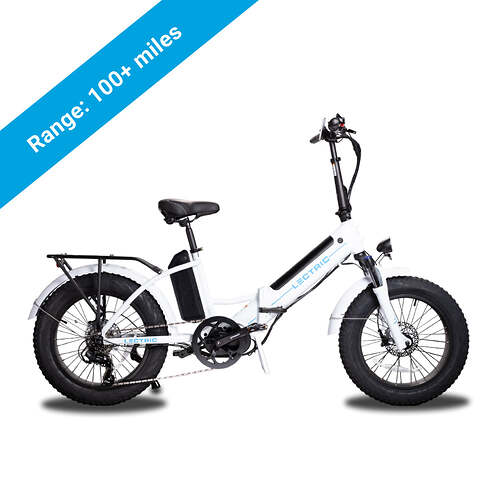 The ultimate eBiking experience, the Lectric XPremium allows you to tackle hills, take on tougher terrain and ride further with its mid-drive motor. Free shipping!

With that kind of range it basically doubles as a scooter.

Not a bike, but…
Dying a little and researching the VW EV microbus.
Then getting a home charger. Then my kids will steal electricity from me when they buy EVs.

I considered an e bike. But there are so many homeless people here I would be VERY PISSED OFF if something happened to it within the first year of my getting it.

So I’m putting it off.

Where I live they have a citibike program with lots of electric bikes, so my wife and I use them for rides. She has the electric and I have a conventional. I get a great workout and she still beats me!

Good news is that we ran (actually cycled) into the head of the program and he said that they have enough funding for at least another five years.

I mentioned somewhere on here that I think this might be my next car. I’d like a camper version. At the moment it’s not clear if VW will bring a camper version to the US, but I’m sure outfitters will build one. Will probably be a few years until that happens.

From what I’ve read, there are two lengths: two-row and three-row. Only the three-row will be imported.
I think it is due to the expense of the safety testing that foreign makers decide, “eh, not worth it for X (a small number) of cars.”
Also, probably why we get vehicles a year after others, because they’ve already made the cars to crash.

Bus will already be hauling a shit-ton of battery. Not sure what else it could have included.