Time to get a new one. Any recommendations? Not looking for too many bells and whistles, just something reliable and energy-efficient and preferably doesn’t make too much noise. Repairman recommended GE, Whirlpool and Kitchenaid as his favorite brands.

Back in the day I would recommend Sears Kenmore…because that’s what Consumer Reports recommended. I don’t know what happened to Kenmore with the downfall of SearsKmart. I no longer have a subscription to CR.

Funny you should ask. I just got a new one. I bought a basic Maytag d/w, mostly just because the house I own came with all pre-existing Maytag appliances and I like the nerdiness of everything all matching.

I ordered through costco.com just after Christmas. It was a 6 week back order, so I went through a lot of paper plates in January.

Old d/w was gonna be a $300 repair, but honestly I went with a new $600 one just to not have to deal with other future problems any time soon.

This is going to keep me up at night.

And then there is the question as to why it’s a “dishwasher” and not a dish/silverware/cup/bowl/cookware washer.

Can you identify anyone who is lonelier than the Maytag repairman? The first two that come to mind are the Baltimore Orioles third base coach and the fact checker at Fox News.

get an asian mom

I recently replaced a 15 year old Kenmore Elite that was on its last legs with a new Whirlpool DW 3rd rack, stainless tub, top control model rated at 47dBA. It was $700 (not stainless exterior). My observation is that 15 years of technology makes a new cheaper model much better than what it replaced.

We have a frigidaire professional series dishwasher. Works great and is super quiet.
IMO with dishwashers, either get the cheapest thing going, because at that level they’re all the same, or throw the budget out and go top of the line. For the most part a dishwasher=a dishwasher unless you pay quite a bit more.

The new one we got, um, two years ago?, is very quiet, around the $1000 mark. And, can delay start (last one didn’t have one, which sucked, because I could never remember to run it before going to bed) so dessert-eaters can put their dirties in instead of piling them up on the counter.

When we bought our current house, it had a dishwasher style I hadn’t used before and I really like it. It has 2 separate drawer style dishwashers that fit in a normal dishwasher space. Since we are a household of 2, it’s handy to run one drawer at a time. When we have company and more dishes, both drawers get run.

This is probably the latest model of the one we have: 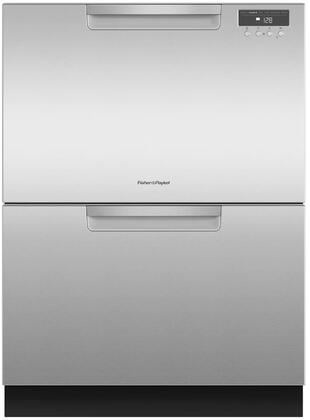 I’ve had a Bosch for the last year and a half (can go look at the actual model if you care). It has a third rack on the very top which we use a lot. It also pops open when the drying starts, which I really like. It shows a red dot on the floor when it’s running - if we had sprung for the more expensive model it would actually show the amount of time left with that light, but it didn’t seem worth it at the time. Now I’m not so sure.

Yeah, it was on sale when I bought it at Costco.com and the same exact model was available at the non sale price from bestbuy.com and homedepot.com.

I didn’t “shop” much other than to check to see what a new low to mid price d/w costs, and I think those were the 3 places I checked. I don’t need or want fancy features, other than the ability to skip a heated dry cycle. I wasn’t interested in paying extra for the controls to be hidden from the front view. The quietness is also a non issue for me because I usually run it overnight.

I will say that the costco delivery & install (two different teams) was efficient and easy, and they delivered it exactly when they said they would, and it was all included in the price. Two dudes dropped it off at 9am. Another dude showed up at 11am to install it, and by 11:30 it was all set up to use.

Plus, it didn’t show up on my credit card until they sent it. I also just bought a couch from somewhere else in January, and those mudder-fluppers billed my card immediately even though they told me the couch is not coming until April.

Bosch is clearly getting most of the love on Facebook. Doesn’t look like Costco sells it, but there seem to be good deals from Loew’s.

Our dishwasher is postively ancient. It has served us well the last few years, so it doesn’t owe us anything. This thread reminds me to keep my eyes open!

Be sure to check the dimensions of the old machine against the new one.

Last I bought was Bosch

In general when you’re paying more it’s for quieter, the layout of your house kind of dictates how important that is.