So, today is Columbus day. It’s STILL a national holiday. My company gives it as a floating holiday rather than erase it entirely.

If Columbus day wasn’t offensive enough with how the native americans were treated by those idiots “discovering america”, now New York apparently is trying to make it less offensive, thus they are renaming it, at least for the purposes of certain things like closing schools as such as “Italian Heritage/Indigenous People’s Day”.

So, why the hell do we need A DAY OFF FOR ITALIAN AMERICAN HERITAGE?

I grew up on staten island where Italian Americans were the majority and I was a minority and I was made to feel subpar by them every chance they got. So now, they are somehow viewed as a marginalized group who needs a day off for pride? this is bullshit. They might have been marginalized decades before I was born, but ever since I’ve existed on earth, they were the majority in my neighborhood and made me feel subpar.

As a kid I’d be asked my nationality. I knew that question was to find out if my ancestors were Italian. I refused to give into this nonsense and would say “I’m american” and go no further than that. To which they would always be all, “that’s not what i meant”. well, my nationality is american. I was born and raised and only have lived in the United States of AMERICA. That usually didn’t shut them up. And now they need an entire holiday to celebrate being “Italian”. fuck this.

It also goes back to Columbus. Like why is it Italian Pride? It’s because of Columbus who was a terrible person for which they take pride in him being Italian.

annoying that my thread entered when I wasn’t done typing and I had to frantically add to it.

In Columbus’ day he was Genoese, and all those Staten Islanders’ families would have been from Naples, or the Kingdom of Two Sicilies, and very much not have liked the Geonese. It’s a ridiculous holiday to appease Italian Americans who don’t know the history very well, even aside the horrible things he did.

But all that to one side, he didn’t even make it to what would become the US!

Schools teach lies mixed with truth. Original documents show that it was not Columbus, but his crew that did the “horrible things.” Importantly, those events mostly happened after Columbus left them on their own while he reported back to Spain.

Columbus might be a perfectly fine human being, but “discovering” america for the white folk isn’t worthy of a national holiday and the way the natives were treated as a result of said “discovery” was horrible.

This land wasn’t empty. Someone already discovered it up to 30,000 years ago and was living there.

My company cancelled Columbus Day, and instead made Juneteenth a company holiday. Nice.

Spoiler alert: not so much.

My company had an unassigned day that would change each year depending on what other holidays fell on a Friday or monday to make a 4 day weekend. They scrapped that day for juneteenth and kept Columbus day as a floater, which probably makes sense since you can already take the floater whenever

I’m in no position to judge you or even my own (9) children, let alone somebody who lived over 500 years ago and about whom so many conflicting accounts were written.

I graduated high school in 1992 and in the valedictorian speech she mentioned Columbus as this great man who did great things 500 years ago. This shows you how worshipped Columbus is on staten island.

The Sopranos had an entertaining few episodes about it. All the Italian Americans are in love with the guy and the one guy in their group who is literally Italian doesn’t like him because he was Genoese.

Columbus didn’t even “discover” the new world for white Europeans. The Vikings were here long before.

The settlements that became the United States were in response to Columbus, not the Vikings.

My company (or any company I’ve worked for) has never given me Columbus day off because it is not required in my state and my company doesn’t provide any benefit it doesn’t have to. I am all for any day I get off of work, I don’t really care what it is called. Weasel Stomping Day anyone?

Just one more thing. I would definitely celebrate Columbo Day.

I’m in no position to judge you or even my own (9) children, let alone somebody who lived over 500 years ago and about whom so many conflicting accounts were written.

I am quite comfortable condemning an individual who sold teenaged indigenous girls to European men for sexual use. 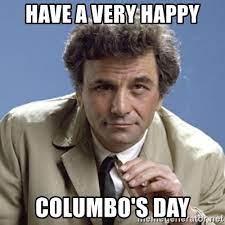 I don’t think that there is any evidence that Columbus personally sold natives into slavery. He hired anyone willing to go with him on his voyages, which unfortunately included a lot of less admirable people. 15th century sailors were not paragons of morality.

As he was governor over the colony at the time (and one who was not shy about disciplining those under his jurisdiction), and given my own indigenous background, I remain comfortable condemning him.

(Although I should revise my earlier observation. The historical record indicates that 9-10 year old girls were being sold.)

We Americans don’t celebrate the discovery we celebrate the first measurable use of our manifest destiny, the beautiful concept that places America as morally superior to all before it, destined to take whatever we want, and endowed by God to fulfill our greatness even if it means setting aside all our morality to do so.