There are bunch of posts about the Coach who “led” or “didn’t lead” prayers whose termination resulted in a Federal Case.

Maybe you 2 need to read the details of the case. My understanding is there was no leading going on in this case at all.

Perhaps this article is incorrect with respect to the issue.

So, short version: Coach prayed after games, allegedly to himself, but players joined in perhaps under duress. 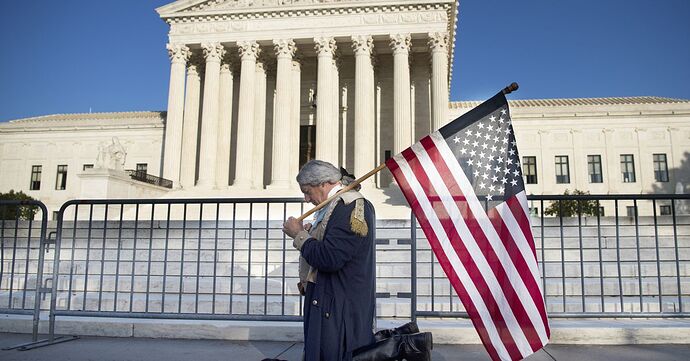 Kennedy v. Bremerton School District is the culmination of 60 years of fears about religious coercion by public schools.

Wanted to let you know that this request has been seen.

I’ll see what I can do tonight; but other mods might help out before hand.

I might modify the thread title to be more generic, though; but I’ll see what the conversation looks like.

Thanks. I know it’s not all that easy. There is no time limit.
I think I’d like to keep the title with “coach.”
Heck I’d like to change it to “fuh-baw coach” since they seem to be the ones most exploiting religion as a control device.

Thanks. I know it’s not all that easy. There is no time limit.
I think I’d like to keep the title with “coach.”

Looking through the various posts, I think it might take more time than I originally thought; some posts might properly remain while others clearly need to move. I haven’t quite found the “starting point” where the divergence began (I find it far easier to make decisions by starting there) . . . I should be able to tackle this tonight.

I was thinking of a thread title of "(Public) Religious Expressions by Coaches & Other Authority Figures (or something along those lines).

retitle should include coaches and other authority figures acting within their role as public school employees.

private school coach -pray away with the squad. local association - do whatever and let the association establish what is ok.

the decision was garbage IMO. the coach can certainly pray. he can even do so in front of the players while at work. he should not lead imo while working on the public school dime.

In the least shocking news of the week, the perfomative dishonest religious fraud behind the OP has continued to be dishonest and performative.

The school district says it’s trying to rehire the former coach — after being ordered to do so — but he’s on the political circuit and hasn’t called them back, writes Danny Westneat.

I forgot that Bible story.

On the eve of the first game, which the Knights won, Kennedy was in Milwaukee being presented with an engraved .22-caliber rifleat an American Legion convention.

Also, WTF that he wasn’t fired, but put on leave, contract expired and failed to apply.

His lawyers lied to the Supreme Court about him being fired.
And when it was pointed out, the Theocratic Court decided that the facts didny mayter and they cared more about pushing their faux-christian agenda.

One of the remedies required by the school was to rehire him.
Rehire him to a job he was never fired from and that he never applied for.