I read some thread in reddit about a lawmaker who proposed to punish people who put tomatoes in clam chowder. Now, I’m familiar with the dish since I’ve seen pictures of it but I am not aware of whatever taboos there are as far as what’s supposed to go in it. Are you not supposed to put tomatoes in it, and if so, why not?

it looks like it according to Google, but it seems like many people in the thread agreed with the lawmaker

is it like how you’re not supposed to put ketchup on hotdogs? 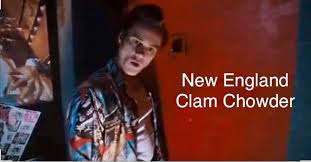 Is it a law against manhattan clam chowder cause I think tomatoes are the main ingredient.

I’ve had both, the white New England clam chowder is where it’s at, imo.

or wait that makes no sense, it’s New Amsterdam right

We should go for clam chowder some time. That’s some good eatin’ right there!!!

Long Island Clam Chowder (yes it exists) is a 50/50 mix of the two - I believe I know where it originated, but no verification

Portuguese Clam Chowder is RI with tomatoes in it, or a little tomato sauce which might be what led to Manhattan

and that is all I know about clam chowder

Dad was a huge fan of the Manhattan Clam Chowder so we had that a lot growing up. Personally I prefer the New England style but Manhattan is not bad.

My kids won’t go near either and my wife is not a big fan so we don’t really do either Clam Chowder any more.

Though Emril Lagasi has a real good “Fall River Clam Chowder” recipe we used to make most years for Super Bowl.

okay so you’re saying it’s like a coke right, even when it’s sprite

It’s basically a New England style, but with bacon. And everything is better with bacon.

is it like how you’re not supposed to put ketchup on hotdogs?

Putting catsup on hot dogs is the Devil’s work.

Putting catsup on hot dogs is the Devil’s work.

Also, spelling “ketchup” as “catsup” is the Devil’s work

I like them both equally, and often order clam chowder as an appetizer if it’s available. I prefer the NE version thicker, and the Manhattan version “soupier”.