There are websites devoted to the theory that James Hewitt is Prince Harry’s father. 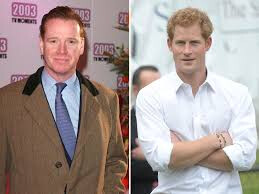 yeah, i heard that. didn’t read much about it, but he resembles james hewitt more than he does prince charles.

Princes William and Charles both have the same baldness pattern. Harry on the other hand, besides being a ginger, still has hair atop his head.

But I suppose neither man makes it a habit of going thru the drive-thru at Chick-fil-A. We’re left to speculate and gossip.

yup, that too. seems really suspicious.

Princes William and Charles both have the same baldness pattern. Harry on the other hand, besides being a ginger, still has hair atop his head.

My only point is: genetics are a freaky thing. No one knows how it works. It’s like magnets.

I didn’t see or read about the interview. But to the OP if a bunch of rich white people are racist is that a surprise to anyone these days?

No, but fretting about the skin color of your grandchild seems a bit over the top. I mean, if you were going to fret, frigging do it before the wedding, so the couple knows where they stand with the family.

(I may be taking this overly personally. My son married a woman whose mother is Black and whose father is pasty white. She’s about the same color as Meghan. I would LOVE to have a grandchild. Worrying about the skin color of said grandchild just seems… really really weird. Like… didn’t you realize there’s some randomness in how color is inherited BEFORE the wedding? It didn’t seem like that wedding was forced onto the rest of the royals. Maybe it was, and they just put on a show?)

There are random variations that can occur (some basic probability comes into play), but a DNA test can solve a lot of things (and also create more problems, too).

i’m guessing they did complain before the wedding. i doubt the family just started being racist after they tied the knot. putting on a big show is what the royals do.

My mom wears a wig because her hair is really, really thin. My mother’s father had a full head of hair as far as I can recall. He died when I was 4 or 5 or 6. My grandmother, she had normal old-lady hair.

i’m guessing they did complain before the wedding. i doubt the family just started being racist after they tied the knot. putting on a big show is what the royals do.

Diana has some ginger brothers. Also who knows what’s true and what’s not. We heard one side of the story and I am positive it had a slant on it. Is the royal family snooty and probably said racisty things to and about Meghan? Yes. Are Meghan and Harry probably both snooty and spoiled? Yes. Just a bunch of rich spoiled people who are totally out of touch with reality.

That’s interesting ancestral information but I don’t think that was the “comment” about which the Spanish Milk Greeting was hinting.

Diana was also REALLY hot. It doesn’t seem shocking that she’d have a good-looking son.

It doesn’t seem super-unlikely that someone other than Charles is the father, either.

At this point, I don’t see that it matters much.

i thought she was kinda plain looking. maybe i couldn’t get past her horrible haircut.

he is no longer royal

I thought he was still a royal prince, still in the line of succession, but no longer performing official duties in service of the queen. And for that reason his father, Prince Charles, is no longer paying Harry money from his income from the Duchy of Cornwall.

But as far as I know, Harry is still His Royal Highness, the Duke of Sussex, and still a prince.

no, i meant americans do not view him as american royalty. we don’t have royals here.

Or are you confused about who Diana was?

She wasn’t a commoner at all. Her father was an Earl and she had the title “Lady” before she got married.

William was the first person directly in line to the throne to marry a commoner in… I think several centuries. Kate was a commoner before she married.

Lady Diana was not.