Feb guesses:
A 4H. Other things may get us too high.
B Pass. Both vul matchpts thinking. Second choice 3S.
C 3N. If partner can’t pull this we probably don’t have slam. 4N may not make and 4C is misdirected.
D 2H. Second choice 2S. Can’t pass at matchpts
E 3H. My diamonds look more like a five-bagger than my clubs look like half a stopper.
F 3H or 4D. It’s close. 3H may get us to 3N opposite Qx (or opposite Kx and no heart lead).
G 2D. Classic problem. Partner is too likely to pass a double, so it’s 2H or 2D. 2D is less distorting with these spades.
H C9 to start unblocking (and because partner may need to shift to hearts to put me back in for another club). If partner had five hearts he probably could have bid. He may well have five clubs.

A) 4H. Maybe we have more, but maybe we don’t, and I want to suggest hearts.
B) 3H. He suggested I bid. I will.
C) 3N. Again concerned we may make more, but we might not.
D) 2H. Matchpoints
E) 2N. Clubs not ideal, but better than a spade raise on Jx (or a heart bid with only 4 diamonds)
F) P. Hoping he doesn’t have a heart stopper
G) Double.
H) D10. Nothing else appealing either.

All frequent voters have already voted, and H is a real mess. Since ST is currently the 1 in the 2-2-2-1 split, I e-mailed him to get a second choice. Anyone else is free to provide further thoughts as well. Mainly, I think we all agree we hate all the leads. For myself, I rate them all as Hippogriph > D10 > C9 > H3 > S2.

Sweet Tooth’s second choice on H is the H3.

I’m also changing my vote on B to 3H. While I like to seek out +200, clubs being a raised suit gives me pause. They may well be able to pick up my CQ, and I wasn’t a lock to set this even if they didn’t. 3S is tempting, but we can always run there if they try to penalize 3H. 3D is also tempting, given the better suit quality…, but hearts scores higher.

I’ve also been convinced by 2N on E. I might try 3C if you reversed my hearts and clubs, but 3H takes up so much space. The C10 may mean this doesn’t wrong-side 3N, and the hearts may be happier in the closed hand opposite a void rather than guessing which round to cover when the Q is led.

I’m changing my vote on G to 2H. I’d go with 3H but BWS doesn’t define the bid, so I’m afraid it might be taken as something else. For some reason I thought the spades were AKJ10 when I chose 2D. I’m not so thrilled about treating AKJx as a five-bagger when I have a decent six-bagger in hearts.

Letting ST’s 2nd choice become the tie-breaker on H, since otherwise it was 2-2-2. 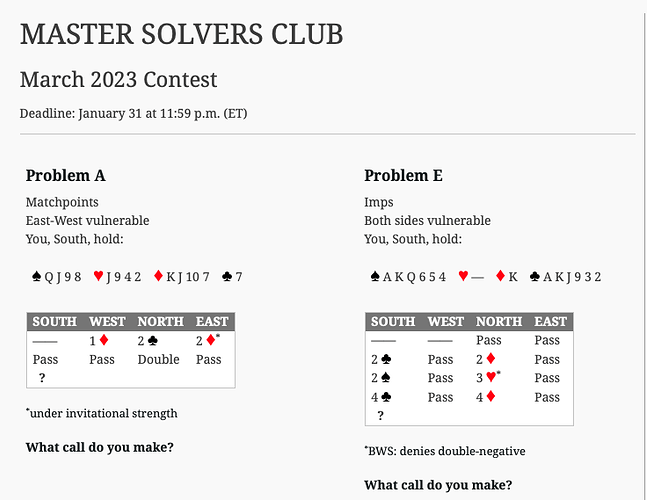 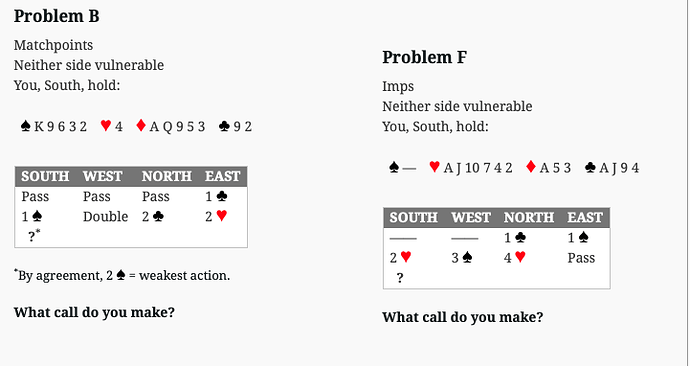 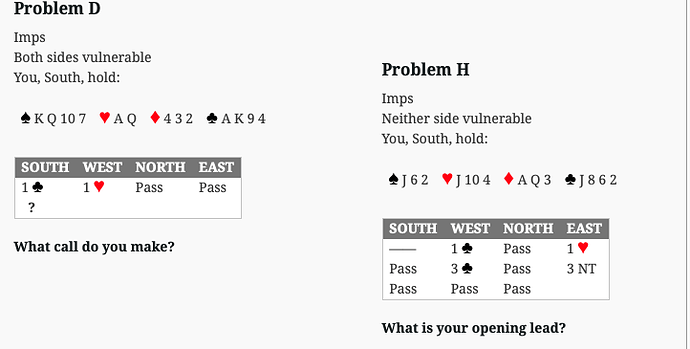 Initial reaction:
A. 2 spades; will bid 3H if partner bids 3C
B. 2 spades. Pass is only alternative IMO.
C. 2 spades. Stick with the 2 spade streak? 3 hearts also possible
D. 2NT. Maybe double is better, but probably only if partner has 4 spades, and he didn’t make a negative double.
E. 5C. We shouldn’t force to slam, but this should get us to 6 if partner has Qxx or xxxx of clubs and an ace.
F. 4S. Not sure how we can bid 7 intelligently. I expect not to stop short of 6.
G. 3H? Bridge World Standard gives almost no guidance that I see. Bots would take this as forcing with slam interest, which is fairly accurate. Or maybe we should bid 3C now, or even 2D now. 2H should get 0, and 4H very little.
H. Spade 2. Hope to get lucky. Alternatives look worse.

B 3D We may yet have game, and I don’t think we want to defend 3H. I can see pass, but 2S showing a minimum when I am a passed hand (not everyone would have passed this) is nuts.
C 3H If partner bids 3S we have double agreement, yeah! If we belong in 6C, we need a way to unagree hearts, which we may not have, so I can see 3C here, and I think it’s close between 3C and 3H.
D Pass. 1N seems right with the double stop. There’s a case for 1S in case partner is broke with four spades. I can’t see any reason to double…We’d rather be in 1N than in diamonds, probably than in clubs, and partner doesn’t have a penalty pass. However, at both at matchpoints, why not let them take their lumps in 1H? This looks like a hand where nothing makes. Doubling is not good because partner wouldn’t pass.
E 5C. It’s tempting to try to bail in 4S, but that might be worse as partner rates to have a small singleton there for 4D.
F 4S Enough to be interested in slam, not enough to bid it. If partner can ask for aces now, great. Otherwise no more forward-going moves from me.
G 3S. Since 2S is a strength-showing natural bid, 3S is a splinter. We need diamond help for slam.
H DQ. I’d lead a spade at matchpoints, but this lead just needs Jxxxx and an entry from partner (or declarer has to knock out my CJ…)

From ST by e-mail

But nothing with 4 different answers.

A. 2 spades, yuck
B. Pass. Game still possible opposite right passed hand; though not really giving partner any clues to valuation.
C. 3 hearts.
D. 1NT. Waffled between this and double.
E. 6 clubs.
F. 4 spades. Tough, with all the first round controls, might be hard to get any cooperation from partner, but not ready to bid 7 yet.
G. 3 spades, don’t like splintering with an ace, but seems like it will get partner to like the right hands here.
H. 2 of spades. Kind of wanted to make the “sexy” diamond queen lead, but in real life, think it is hard for partner to read, so will not get useful signal from her.