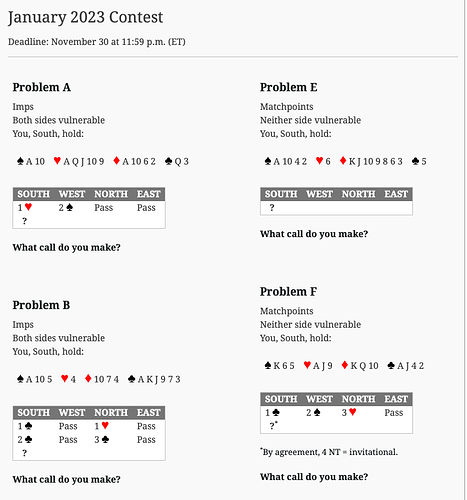 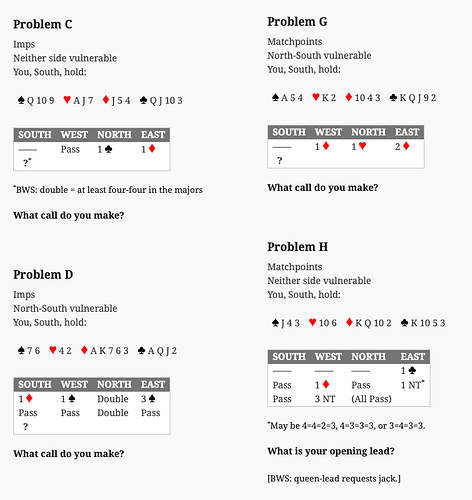 We have a tough tradition to uphold now. Unofficial results have us in 4th place for 2022.

A Dbl. I will bid 3D over 3C next. 2N a close second choice. This would be a dead minimum for that action.
B 3S. If partner has the other aces, for example, we belong in 3N.
C 2D. I would bid 1N at matchpoints, but I think that’s too distorting at IMPs.
D 4C. 5 of a minor (probably 5C) is likely to be where we belong if partner is non- minimum, and we are likely only collecting 300 against 600 or 100 against 130 if we pass…
E 1D. Close second choice is Pass. No preempt with four spades as dealer.
F 4N. Avoids the SA, S ruff defense. Not to mention the S finesse on opening lead.
G 3D. Really close between 3C and 3D.
H H10, passive. Close second C3, but my C5 is a bad spot. In this style of bidding, a 1D response usually has 5+ diamonds, so that’s out. A spade is too dangerous for my tastes but obviously could work out well.

Do I need to start a thread for the 2024 MSC yet? Probably so, but I won’t start it until verified. For finishing 4th in the 2022 contest, we become guest panelists for three months. As I recall, we were 3-month panelists once before. I don’t remember why. Maybe because we won a month, or did well in an annual contest. With the AO gone, I’m not sure when or where it was.

As I recall, the lead time was huge, so I won’t be surprised if we are guest panelists during 2024. Rules include, by the way, that whatever answers “Steve White” submits as guest panelist must also be “Steve White”'s answers in that month’s contest. On the bright side, when we are a guest panelist we cannot get a 0.

A. Double, Will be unhappy if partner bids 3C, but maybe she won’t. Will try 3D if she does.
B. 3S. Since vol at imps, and I do have a lot of playing strength for the 2C rebid.
C. 2C. What else? Oh, I see the three previous voters proposed something else, not the same thing. I’m certainly not wild about his. Between the other two choices, I much prefer 1NT.
D. 4C.
E. 3D. Hate to pass as dealer with such a good diamond suit. While we might miss a good spade fit, it’s watchpoints, and this is better if partner doesn’t have spades.
F. 4H. What else, with spade K often wasted? Do people think 4N is natural?
G. 2H. Try to go plus at matchpoints. In retrospect, maybe 3C is better. We aren’t comfortable either way if opps bid 3D, but if they do we can bid 3H and have been fairly accurate. In fact, I’ll change my vote to 3C, while scoring myself on 2H.
H. H10, because I don’t know which diamond to lead.

A little over 48 hours to go, and we’re in much better shape than usual. Currently leaders on 6 of 8, with two choice at 2 each on the remaining 2. Likely we’ll get votes to resolve the others.

I am quite worried about the theory 4N is natural on F (which I interpret as VVV’s intent. Not sure about ST or BTDT.)

I am quite worried about the theory 4N is natural on F (which I interpret as VVV’s intent. Not sure about ST or BTDT.)

Checking with BTDT by e-mail, he points out that the problem states that 4NT is invitational by agreement. That seems like a very strange agreement to me, and a very strange setting for a MSC question. Now aware of that agreement, I’ll change my bid to 4N. (Table to be updated after someone else votes.)

H. H10, because I don’t know which diamond to lead.

Dummy has J9xxx. Declarer has Ax(x). Which diamond do you like?