What do you think? Will these agents be held accountable? 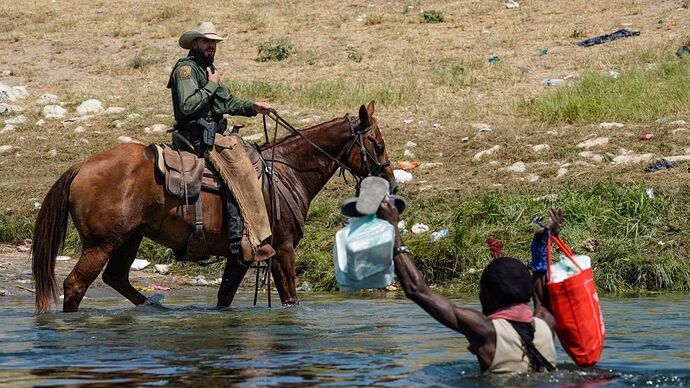 Biden Says Border Agents Will Be Held Accountable For Misconduct. A Critic...

I haven’t been paying attention, but all my conservative friends have been posting stuff about how they weren’t whipping and what you were seeing was a double rein hanging down or something to that effect. Have they been whipping?

I saw a picture. The one agent sure looked like they had a whip, with a handle and not a rein. Unclear if they were whipping the immigrants, or their horse though.
Edited: Found it. See the middle guy with the cowboy hat in the second pic: 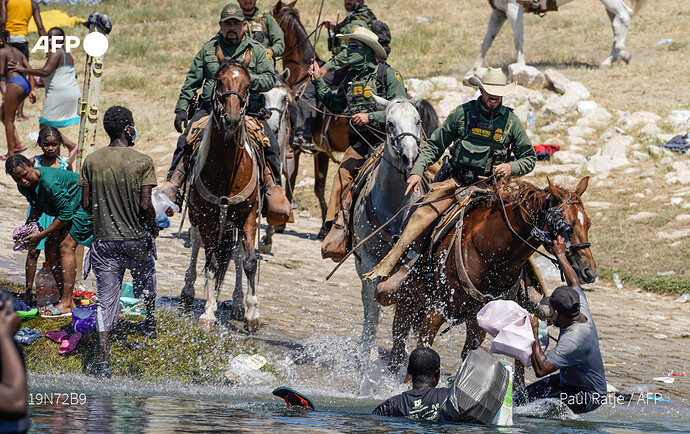 @RepEscobar
Absolutely unacceptable. No matter how challenging the situation in Del Rio is right now, nothing justifies violence against migrants attempting to seek asylum in our country. 📷: @PaulRatje

Looks like a whip handle.
All the other pictures posted sure look like reins not whips. And if you look at the agent I mentioned in the above pic, he also seems to be holding a rein.
Conclusion: inconclusive.

Also added, jeezus what a cluster *** either way. Have some compassion for these unfortunate people.

We get illegal immigrants crossing the border from the US into Canada. Here’s how that works: 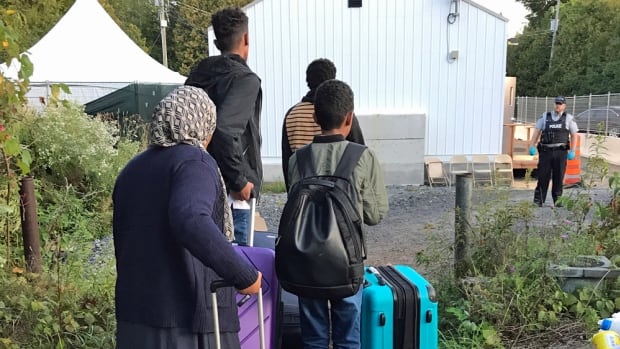 Roxham Road: How an unofficial border crossing has become a de facto entry...

The unofficial border crossing at Quebec's Roxham Road is becoming entrenched as a destination for asylum seekers, with a permanent building, RCMP guards and thousands of entries in just two years.

Disagree. it is part of the reins. But it does appear that all of them have the longer reins.

And I don’t think it does anyone justice to make a judgement call on just a still photo. I would like to see video of the actions.

And starting with the assumption that an immigrant is “seeking asylum” for anyone that is trying to cross the border w/o following established procedures isn’t going to end well for anyone.

“5k in three months” is a far cry from the 10k that was all waiting at Del Rio.

Add to that the fact that the border patrol is in a “damned if they do; damned if they don’t” position in trying to handle those who “flaunt” the entry process by just forcing their way onto US soil.

I do agree that the US would benefit from having more multi-lingual officers on the border so that instructions can be provided in the immigrant’s language.

From the article I posted:

During a leaders debate (without Justin Trudeau), for example, Green leader Elizabeth May poked at Conservative leader Andrew Scheer for fanning misinformation about the migrants. “You act as if people are illegal when they come here as refugees. Under international refugee conventions, people have every right to come and claim refugee status,” she said.

Which seems to say that border jumping is actually quite legal internationally. Still, many aren’t doing this legally. Nevertheless, the difference is in how the border jumpers are treated when they cross. Whip or no whip, I don’t need to see a video to conclude that at the south border of the US, gov’t officials are treating people like animals.
They’re coming into both the US and Canadian borders. Some of them are illegal, some aren’t. They need to be processed to conclude that. None of that is an excuse for poor treatment.

“5k in three months” is a far cry from the 10k that was all waiting at Del Rio.

Rounding people up on horseback like they’re animals is because there’s ‘too many’? I don’t think so. It’s about attitude, not numbers.
Read the article again. it describes how the immigrants on the south border of Canada react:

“One moment, now you are in Canada. You are under arrest for illegal entry to Canada. Do you understand?”

Everyone nods and then proceeds, struggling with luggage and backpacks, holding their childrens’ hands. Often the RCMP help with the kids.

Split reins - one end of each rein is attached to each side of the bit. The reins are held crossed together in the rider’s hand (just one hand, no serious rider uses two hands, and no serious rider ever grabs the horn on the saddle). see front rider in your link.

The rider you are questioning clearly is holding the reins crossed in his left hand. He’s using his right hand and the associated long rein to direct and control his horse.

Conclusion - No whipping of migrants

Fair enough. They’re not using whips, though it’s easy for the horse-ignorant to see that picture and conclude that there is.

I thought the guy who took the original photo said there was no actual whipping and it was just a weird camera angle. Is there any actual video?

though it’s easy for the horse-ignorant

I’m fairly horse-ignorant, but careful inspection of the picture will show that it’s part of the reins. That’s why I work to not respond to any still pic intended to generate outrage. (Not accusing you of such, but the twitter poster.)

And I don’t disagree with the Canadian approach in principle; but how would the RCMP respond if they’re faced with 10k people trying to force their way into Canada and working real hard to elude arrest?

And I will concede that many of our border agents don’t speak a wide range of languages; I believe most can speak some Spanish. I doubt many can speak other languages, though.

There’s a number where it becomes acceptable to switch from treating people with respect to treating them like animals? That doesn’t justify anything.
Plus:

"The routine is practiced and orderly as the arrivals wait for RCMP warnings of illegal entry, then cross over.

Which suggests that one person sitting in a lawnchair with a megaphone and a bunch of busdrivers would be able to handle a surprisingly large number of border jumpers.

One problem is that the asylum system is somewhat broken and abused by false claims on a regular basis. A 2020 Syracuse study found that over 70% of asylum claims are denied. That number dipped during the 2008-2012 years as immigration dropped but has gone up steadily since.

People even abuse the refugee system by claiming to qualify when they do not. That is a little harder to fake. Abuse of temporary refugee status by way of overstays is fairly common.

Yes, there is actual video. I saw some video coverage of this event.

I recommend you go watch it. I recommend everyone go watch it so that opinions can be made based on it rather than inflammatory headlines and half-informed statements.

There’s a number where it becomes acceptable to switch from treating people with respect to treating them like animals?

My question wasn’t an attempt to justify what’s taking place on the southern US border. I agree that there are better ways to respond (in language instruction being at the top of that list).

My question is more theoretical on how the RCMP would respond if they’re confronted with the same scenario of people attempting entry who do not respect authority. I’m not sure that one person in a lawn chair is going to dissuade 500 individuals who are all bent on entering the country and won’t take “no” for an answer.

The scenario you present for “border crossers” isn’t exactly analogous to what’s being experienced in Del Rio.

I recommend you go watch it.

unfortunately I don’t have it handy. I’d have to google it. I’ll try to find time later.