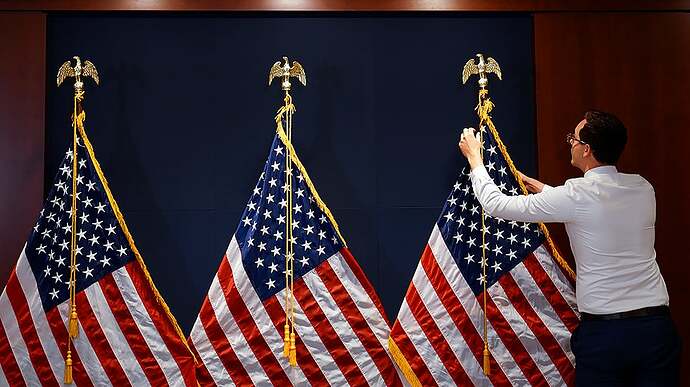 A post by Black Lives Matter Utah on the Fourth of July called the American flag a “symbol of hatred,” drawing strong reactions from

BLM Utah is not officially part of the broader BLM organization.

If her intention was to get more attention, she has done it.

the american flag has in trump years become a symbol of hatred.

I disagree, it’s only so if the rest of the country surrenders it as such.

There’s a reason they fly their silly Trump flags to send the message.

She says it’s in part to make people uncomfortable. But this seems to be a bad uncomfortable. She’s feeding those who already oppose BLM, so not making them in the slightest uncomfortable. It may be making some BLM supporters uncomfortable, but what’s the benefit of that?

When I see an American flag, I assume the person’s house it is attached to or who is wearing it is a jerk. I can’t help how I feel. It’s a tiny bit better now that Trump isn’t president, but I still wouldn’t sport an American flag.

This is a ridiculous notion. If you don’t take pride in the American flag and think that this true then guess what? In short order we will have 2 flags and that will be the end of our nation.

you mean split up the US? works for me.

there was a thread about this on the ao and some people posted about how this would be impossible though.

Yeah, the problem with splitting the nation is that the nation is integrated enough that splitting would probably require a civil war. And how many of those end up with 2 nations at the end?

yeah, that has become the stereotype of people who fly the american flag.

Well then you’d think I’m a jerk because I have a US flag on my house and I’m far from a Trump supporter.

I’d decided in recent years that I wasn’t going to allow the flag to be co-opted for intolerance and other un-American ideas.

Yep. The BLM writer identifies a real problem. Various deplorables display the flag as if they are “true Americans”. They aren’t. But, the writer does not have any suggestions regarding what to do about it.

The obvious solution to me is that if you’re flying a BLM flag, or a rainbow flag, put the US flag up with it. Same with clothes. “Real Americans respect their neighbors”

If you don’t want the other side to co-opt the symbol, you need to use it yourself.

(Coincidentally, I’m posting from a relative’s house. She has a US flag up, in a mixed race neighborhood. I’m quite sure she isn’t racist. Their 4th of July block party has some black neighbors, but probably more whites. Now I wonder what the people just walking through think. Maybe they figure she keeps a loaded shotgun in the bedroom.)

do you deny that this has become a stereotype? it wasn’t prior to trump. something has changed.

I think it’s a stereotype amongst very liberal people, which is partly why I put the flag up. I’m genuinely proud of the American ideals (as I see them) and will help in a small way to push back against that kind of coopting of the flag.

The obvious solution to me is that if you’re flying a BLM flag, or a rainbow flag, put the US flag up with it. Same with clothes. “Real Americans respect their neighbors”

I agree wholeheartedly. Instead of acting like it doesn’t stand for you take it back and make it stand for you. It’s certainly not a symbol for only Trump Americans. It’s a symbol for all of us, our successes, our failures, and everything else.

We put out flags for the 4th this year. Not really a fan of symbolism but I don’t want to cede this one to the treasonous trumpers

Well then you’d think I’m a jerk because I have a US flag on my house and I’m far from a Trump supporter.

We used to fly an american flag, but then a nearby street pole was hit by lightning, and it seemed like a bad idea to have a flagpole on the house. Maybe we should think about some other way we can display the flag.

But the association between “flies flag” and “conservative” isn’t new. Back when we had the flag, nearly two decades ago, someone from a liberal organization came to our door looking for signatures or something, and mentioned that ours was the first house with a flag where the people agreed with him.

I have decided that idiots wearing aloha shirts and Tommy Bahama shirts (probably knockoffs) are not going to keep me from wearing my rather large collection of them.

And when I give the OK symbol, I really mean that “everything is OK” and not some bullshit racist shit.