Biden to nominate Ketanji Brown Jackson to the Supreme Court

Biden to nominate Ketanji Brown Jackson to the Supreme Court

The president intends to name Jackson, a judge on the D.C. federal court of appeals, as his first Supreme nominee. She would be the first Black woman justice in the court's history.

This looks like a leak, not an official announcement. But she seems like a very traditional pick. Except she has experience as a defence attorney, which i don’t think anyone else on the SC has.

Except she has experience as a defence attorney, which i don’t think anyone else on the SC has.

There was a story in my news feed earlier this week (can’t find it now) about a group that was lobbying Mr Biden to nominate Ms Brown Jackson without explicitly naming her by saying he should nominate someone with experience in civil rights or as a defense attorney. I believe you’re right that none of the current justices have that background nor do the other names floated as potential nominees.

This looks like a leak, not an official announcement

I think the official announcement is expected today. Didn’t Mr Biden say he would nominate someone by end of February?

I’m sure this belongs in the “things that bother me more than they should” thread, but something about the press publishing leaked announcements before the person gets a chance to announce it rubs me the wrong way.

Here’s a news article based on the official announcement 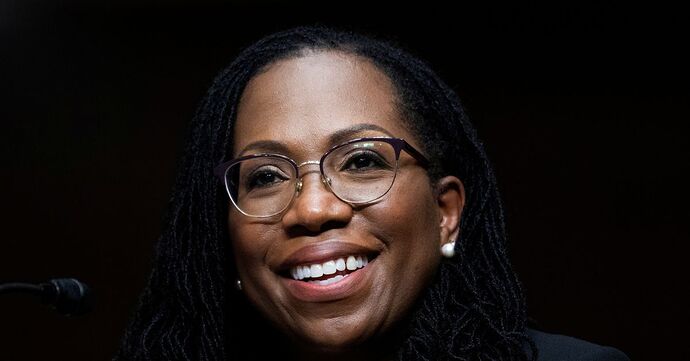 President Joe Biden has selected federal appellate judge Ketanji Brown Jackson to become the first Black woman to serve on the U.S. Supreme Court, the White House said on Friday, setting the stage for a confirmation battle in the closely divided...

I heard she likes Tolkien…

Um, is that meant to be some kind of joke i don’t understand?

Based on your question, yes it is.

I don’t get the Tolkien reference either unless same last name as director Peter Jackson.

She seems well qualified, wonder what far right hit piece will come out in coming days.

I had the same curiosity. I went to Fox News, the article on the announcement linked to an earlier article from when she was a front runner. That earlier article claimed she was not a good potential nominee because some of her decisions were overturned by higher courts, even ones with liberals on them. Did not seem very persuasive to me, but I suppose I am not the target audience.

She seems well qualified, wonder what far right hit piece will come out in coming days.

They don’t need to come up with anything specific. They can continue the “by limited the choice to black women, the President isn’t picking the best choice” that they’ve been doing.

An article I read this morning included an example where her decision was overturned by the appeals court but then SCOTUS overturned that, restoring her decision. The article’s point was that the DC circuit tends to see cases that turn on highly technical minutiae of federal law that confuses even experienced judges (and fewer cases relating to controversial social/policy issues). Based on that, I don’t see one (or a few) of her decisions being overturned on appeal as a strong demerit. If her rulings are regularly getting overturned that might be a different story, but I didn’t gather that’s the case.

Yep, that seemed to be the point of that example. If you regard SCOTUS as the final arbiter of the law (even though they’re not always right, either) then in that particular example Jackson was ‘right’ and the appeals court was ‘wrong.’

And the Democratic Refrain to that should be “Why do you hate Black Women?”

I might word it “Are you calling black women unqualified?”

aaaah, the classic “when did you stop beating your wife?” type of question.

read the wiki on her.

approved for her first federal court position on a voice vote. introduced glowingly at the time by fmr speaker of the house Paul Ryan, who (by marriage) is in her extended family. Theoretically, this suggests he would still support her and advocate on her behalf.

Ryan could have helped her lock up all the necessary votes to pass the House. [Yes, I know. It’s a joke.] That’s worth exactly 0.0000000000 votes in the Senate. Fellow Wisconsinite Moscow Ron would spew incredibly batshit crazy stuff, and Ryan would have stood there watching like Jerry Falwell Jr. in the bedroom corner.

… watching like Jerry Falwell Jr. in the bedroom corner.