Ok so my cat figured out how to flush the toilet. There’s nothing she likes more than just walking by and watching the water swirl down. One time she spent an hour in the bathroom just flushing the toilet over and over again.

I should probably turn off the autoflush feature, she’s not smart enough to figure out which buttons do what exactly and I think the remote is out of reach anyway. People with pets - do you leave the autoflush on? Do you keep the remote nearby or do you place it out of reach?

I don’t know how to answer. I have a pet, but do not have an auto flush feature or a remote for flushing the toilet. So far our dog has never used the flush lever on the toilet, AFAIK.

My kitties would so do that. Guess that’s one home improvement we won’t be doing any time soon!

Although we keep the toilet lids closed anyway so that the younger kitteh doesn’t help herself to the “spicy water” as Jaspess II puts it.

Yeah it’s gross. Every time I walk into the bathroom she excitedly waits for me to use the toilet. I have had to flush before she gets a chance to stick her paw in the bowl.

Reminds me: I taught an ex-girlfriend’s cat how to turn the lights on and off. That was a mistake.

Is that why she’s an ex-girlfriend?

As for the OP, I hate, loathe, and despise the auto-flush toilets in public restrooms so it’s difficult for me to comprehend voluntarily putting one in my house. There’s literally nothing in the world worse than shifting slightly only to have the toilet flush and splash you with nasty dirty toilet water.

Nope, but she did get left with a sometimes unpleasant after effect of our relationship.

Will add, have a bathroom off my bedroom, if one of us goes during the night. well, if it yellow, let it mellow. I don’t want the toilet flushing

You can actually teach cats to use the toilet I believe. If they can flush it also I say put this to your advantage. As long as your not out west where water is as precious as gold that is.

I don’t despise auto flush. (Just bad auto flush. The sensors in my office work pretty well.) But i can’t imagine wanting it at home.

I bought a faucet for my kitchen that can be activated without touching it. I’m not averse to fancy plumbing gadgets. But i just don’t see why anyone would want auto flush at home.

(Of course, i despise “soft touch” cabinets, and people seem to like them.) 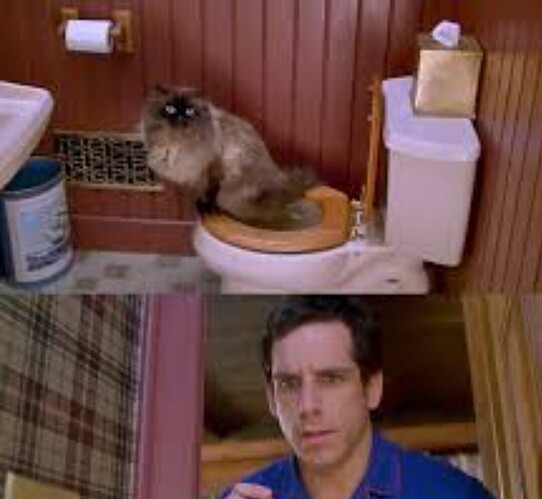 if one of us goes during the night. well, if it yellow, let it mellow. I don’t want the toilet flushing

if one of us goes during the night. well, if it yellow, let it mellow. I don’t want the toilet flushing

I don’t know what kind of toxic pee you’ve encountered that it reeks after being diluted in a toilet bowl for a few hours.

The title could also refer to winning a gold fish at a carnival game.

Isn’t teaching the kid to flush part of potty training?

Yes but often times potty training kids will use a potty chair and not the regular toilet. That is something you don’t necessarily want the kid to handle dumping out.

Yeah, i don’t think we taught the kids to flush until a year or two after they were potty trained. Although we did have a nice little plastic seat that made the regular toilet seat smaller, so a kid could sit on it comfortably.