(just to clarify I wasn’t actually calling you a lying liar. I agree with your thoughts and just found it hilarious someone made an account to call you a “blatant liar” for quoting an article instead of driving through Fresno.)

Fresno? No one goes to Fresno anymore.

i think everyone got that, except maybe the newly registered troll

I thought so, but Twig was still defending herself there, and god knows she’s taken enough flak from me over the fact that she likes to drive cars for no stupid reason.

Maybe the moral of this thread is that AOC doesn’t exist properly as a person at all, but is instead just an Icon reflecting our fears, desires, and sarcasm.

Do you have estimates on Thorium btw?

It has been very costly in recent decades. I think one of the cost problems in the US is that every nuclear reactor is essentially a bespoke design. The design, construction, safeguards, and review process are very costly when each reactor is completely unique. France brought a lot of nuclear power on line relatively quickly and cheaply decades ago using standardized reactor design.

I’m not suggesting every reactor should be identical, as there are site specific reasons why design might need to be varied. For example, a reactor in a seismically active area would have different design concerns than one in a coastal area in terms of adverse events.

It frustrates me that the federal gov’t routinely buys nuclear reactors and puts them on ships. It seems that most of the technical issues have been solved. AFAIK, the only company still doing that is BWX.

They started a sub to develop a Small Modular Reactor for civilian use that presumably would have had a standardized design. (15 x 75 feet) According to this, B&W mPower - Wikipedia they dropped the idea for lack of interest.

I think there is a company in Oregon that is trying something similar. They think they can build a reactor in a factory, load a reactor on a flatbed truck, and ship it to the site. edit: Wikipedia again: NuScale Power - Wikipedia

I actually posted this idea here and on another message board. Someone in one of those places mentioned EV’s lose a lot of efficiency towing, but I also saw the other day that some company is developing this technology. I think swappable batteries of some sort is the answer.

Not only the unique design issues are costly in the US. The entire NIMBY attitude, plus the endless lawsuits from green groups, political BS, and insane regulation probably double the costs, at a minimum.

Thorium reactors are estimated at around 2/3 the cots per GW as Uranium in initial capital. Fuel would be a little cheaper as well.

Rationalize the regulatory environment and shut down the nuisance suits and that would make them much better than coal plants on pure economics. Add in 0 carbon and well…

After googling some Nooooclear stuff, it now bogs up my google feed.

Some notes here:
The US has reused its designs before. However, the costs always seem to go up anyway. 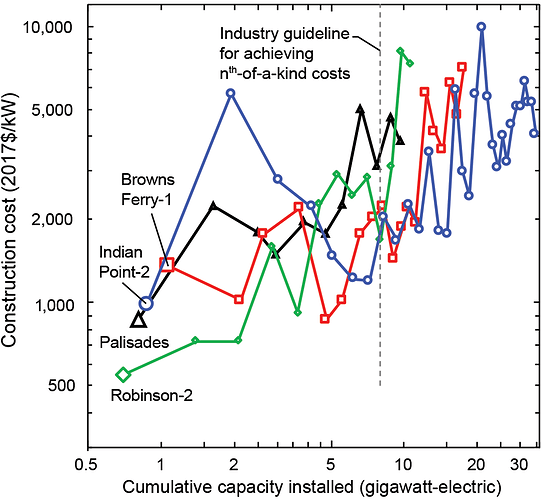 One reason is we seem to be bad at standardizing. Something always goes wrong and sets off expensive delays.

Changing safety standards is another reason. I don’t think? that’s avoidable though. As a 1st world country we seem bound to place ever an increasing price on health, life, infrastructure, etc.

And I think? the rest is the cost of labor and planning and materials. Basically hiring engineers, construction crews, and moving lots of steel and concrete is expensive in the same way it is for bridges, roads, spaceships, and trains. Especially mega-projects (speaking of “high-speed rail”).

NuScale and advanced nuclear both sound exciting, but it’s tough a sell in an industry that’s both risk-averse and famous for over-promising. They may be cost saving, but we’d have to invest heavily in them to find out, so we won’t.