Amy Cooper, the dog-owner who called the cops on a black birdwatcher in Central Park, goes through sensitivity training and gets charges dropped. 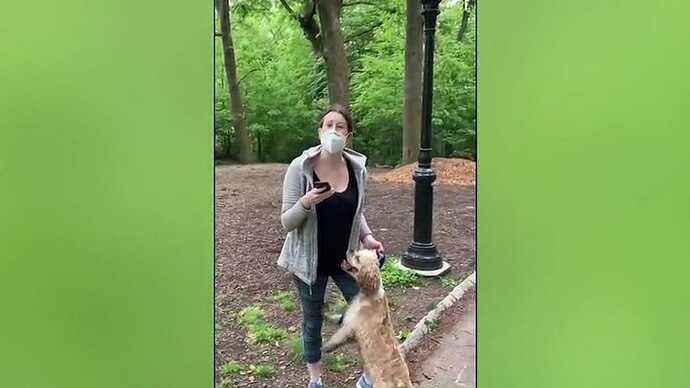 Charges were dismissed Tuesday against Amy Cooper, the white woman who called 911 on a Black birdwatcher in Central Park last May.

Interesting tweet from her lawyer: “We thank them for their integrity & concur w/ the outcome. Others rushed to the wrong conclusion based on inadequate investigation & they may yet face legal consequences,” Barnes tweeted.

I’m guessing the primary target would be Amy’s employer who fired her after the media storm. It’s likely that she hasn’t found another job given the fact that employers probably don’t want to take on the potentially negative publicity that would come with it. I suppose there could also be possible defamation suits with the media and maybe even with the birdwatcher himself.

similar to how Sandmann sued Wa Po and CNN for defamation after the Lincoln memorial incident in 2019.

Not sure how much he got, but the networks seemed willing to settle.

I dont see a wrongful firing lawsuit getting much money compared to hitting the larger media networks.

I have no idea if she has any case. I didnt follow this one at all. It is very possible news outlets ran away with this one based on a short video similar to sandmann and set themselves up for another lawsuit. Also possible she is just a POS and will go fishing for $$.

I hadn’t realized she’d called 911 again after the video exchange.

“avoids punishment” is misleading. she lost her job and i think the SOA took some action against her in a very small field where this mark on her name is going to make it difficult to get another job.

she didn’t go to prison, which whatever, i didn’t think she should have gone to prison for this. nobody died or even got hurt.

Does anyone know what the ABCD’s final action on her was?

I will say the President of the SOA took away her due process by calling her out by name before the ABCD had even heard her case.

I mostly agree, until the last sentence. What if someone had gotten hurt, does that make her more guilty for the exact same same actions?

Legally, probably, for me I have trouble with the concept

what she did was wrong. I’m not disagreeing with that. but yeah, legally it matters that nobody died, thus i’m not sure prison is appropriate. what more would be accomplished by putting her in prison?

she needs to gain control of her anger issues for sure. not sure putting her in prison would accomplish this.

Christian Cooper wouldn’t even testify against her, so the victim didn’t even want her put in prison. Seems pointless.

And that’s pretty much what the court decided - putting her in sensitivity training was a better form of correction than jail time. I agree with this as long as it’s applied fairly along the population, and not just a remedy for upper class white people.

nothing formal as far as I can tell

Or, at least nothing public.

I think that’s good to know that they seem to only issue public actions for the most serious of offenses; look at how few there have been in general. I hope this means that they understand the consequences of these could be life-long.

A while back I saw a more complete list with penalties of various levels. There were surprisingly few.

Holy shit, this isn’t just an actuary headline, this is making real headlines. (looking past the winter weather that stretched all the way beyond the southern tip of Texas into Mexico)

The real headlines don’t mention she’s an actuary - I wouldn’t have even known that if it hadn’t been pointed out in an AO thread. But it’s a symptom of how out of control cancel culture has become in this country.

Yeah, the first thing I thought of when I heard about the fallout from this and what the SOA president said was “cancel culture”. What she did wasn’t good by any means, but should she never be able to find an actuarial job again? C’mon

oh yeah, it was a huge headline. i happened to dig a little to see that she was an actuary. her job description sounded actuarial to me, so i looked her up in the directory, and there she was.

Does anyone know what the ABCD’s final action on her was?

I will say the President of the SOA took away her due process by calling her out by name before the ABCD had even heard her case.

Typically, the ABCD puts their investigation on hold until after legal proceedings have finished, so they may not even have started their process at this point.