On to other new ways to cheat in the game once called Base Ball.
A-A-Ron heading to The Metropolitans? Well, not by properly outbidding the Yankees. That would be impolite to the Yankee owner – and collusion.

Some of the FA dominoes starting to fall.

Oh and Fred McGriff only member of the modern day vets committee (is that what they call it) to be inducted this year. A much better selection than Harold Baines for sure.

agree that the crime dog is solid. for those who argue he is borderline, there is plenty to place him on the correct side of that line without implying another 6 dozen guys have to now get in by the transitive property.

will his plaque have the tom emanski hat?

I am losing all interest in the Red Sox. This is not the first time they brought in a GM from a small market team to run a big market club like a cash strapped team. While I am not in favor of spending crazy, I am in favor of paying for home grown talent that produces results. There is no plan. Why would Devers stay? This team is let Betts and X go, and has nothing to show for it, no pitching, no significant prospects after finishing last. Top priority is to sign an aging closer. I need the Celtics and Liverpool to carry me into June and hope the Seahawks draft gets me excited into the fall. July and August could be brutal.

But this does seem to be the year of “OMG they are handing out crazy money.”

But this does seem to be the year of “OMG they are handing out crazy money. ”

But some of these billionaires will tire of this, or run out of money.
Fans should never worry about their billionaire owners’ money. They should worry more about their local area’s tax dollars being used for a billionaire’s purpose.

Oh I’m not worried about the poor owners. I mean good for the players taking advantage of the market.

But this seems to be a year when all kinds of long term contracts, even for older players, are being handed out at very large AAVs. It seems to buck a trend of the past decade where these types of deals did happen, but less often.

I do agree they are being overstupid, but I don’t worry about it.
Not the Dodgers, after all.
Dodgers probably spending a lot of time checking on sexual proclivities of prospective singings, whether they’d have to pay during suspensions and such.

The Sox are not poor…and they are spending more than $60M on past peak injured Story, never available due to elbow issues that were completely foreseeable Sale, and a 34 YO closer. In addition, they are still paying $4M to Manny and Pedroia. David Price’s $16M did come off at the end of the 2022 season. The Sale contribution is reduced since he will count $10M a year for 5 years starting in 2035. He’s 33 and pitched 11 games in last 3 years. Their decision making is horrible. Bloom is awful.

Whaddyagonna do? Stop following them? Gaslamp them?

Cubs spend 7 yrs/$177M on Dansby Swanson. I think ATL wanted to keep him, but were nowhere near on that size deal. Good for him as at 28yo it was likely his last chance to get a monster contract.

I don’t know that the team views Grissom as ready to start at SS. Probably another move coming.

I guess the stupid long-term contracts are still happening.

Wow, Correa’s deal with the Giants hits a snag right before the press conference announcing him due to his physical, and the Mets swoop in and sign him. The Mets spending spree is staggering. Their 2023 payroll is approaching $400M, and with luxury tax they are at almost $500M.

Bauer now up for grabs. Expected to be available for the minimum (assuming no one trades for him), while LAD would pay over $20M for the year. 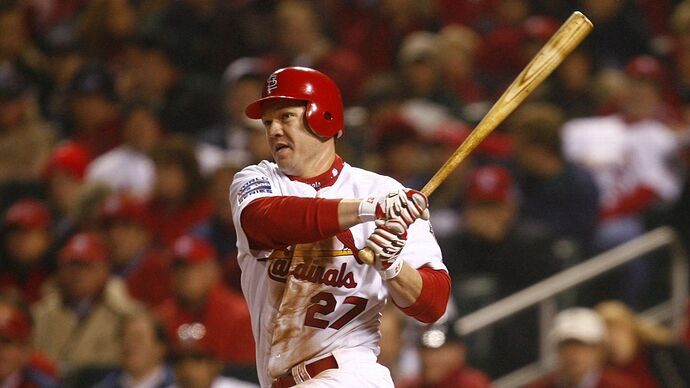 Is anyone getting into the Hall of Fame today? Everything you need to know on...

And, back to sleep, everyone. Scott Rolen in, no one else from the ballot.

Goes to show that you don’t have to be a loudmouth quote-maker to get noticed, eventually, for your skills. (It does help, though.)
I just hope he’s not a closet Steve Carlton.

If you are a big hall guy I don’t really have a problem including Rolen who is as good or better than some marginal guys already in the Hall but when I think of Hall of Fame players Scott Rolen is unlikely to ever be the face I picture in my head.

Fred McGriff only member of the modern day vets committee (is that what they call it) to be inducted this year.

I was surprised when McGriff and Tony Fernandez were traded by the Blue Jays to the Padres for Joe Carter and Robbie Alomar at the end of the 1990 season. Biggest trade the Jays ever pulled off. I didn’t accept Joe Carter as Fred’s first base replacement until Joe hit the three run walk off home run to win the 1993 World Series for the Jays.

I think the add is that defensively he is seen as better than Schmidt & Nettles (who had power but never hit enough and played in the wrong decade, in the wrong league), he’s not Brooks, but that was special.

Beltre, might be the only other better at third