GoA updated Conference Rankings 11/08/2022,
ND solidly beating Clem is a boon for the Pac 12 (Stanford beat them, and they play USC later) as well as the Big Ten (tOSU beat them).

I don’t think TCU will get ignored as one of no more than three undefeated teams from a Power 5 Conference. The rankings have changed slightly so that two SEC qualifying teams get in (no, I don’t think Alabama qualifies, unless a lot of shit happens, hence the added location near the bottom).

Where does “Once-Beaten Big10 Division second-place” fit in here?

They don’t.
Unless they do.
Gonna be hard to squeeze that in.
MI beat nobody, and beat them all badly (expected)
tOSU beat ND (who beat essentially the whole ACC) and some other crap.
If it’s tOSU, then maybe.
If it’s Michigan, then no.

Breaks the basic tenet of this ranking system, which assumes that Conference takes precedence over individual teams. But, really, it didn’t make a difference until now, rendering early season polls moot in the first place (another claim).

I mean, I think tOSU gets in over a two/three-loss big 10 Champion, but would it get in over a one-loss runner-up Michigan, who beat tOSU? Supposing Mi beats Ill in two weeks, beats tOSU, then loses to ILL or WI in Conference Championship, then what? Staggering to think about.
I’ll sharpen this up in a few days, after I stew over it.

Where does “Once-Beaten Big10 Division second-place” fit in here?

Another local honk trying to gain access to the teams he covers: 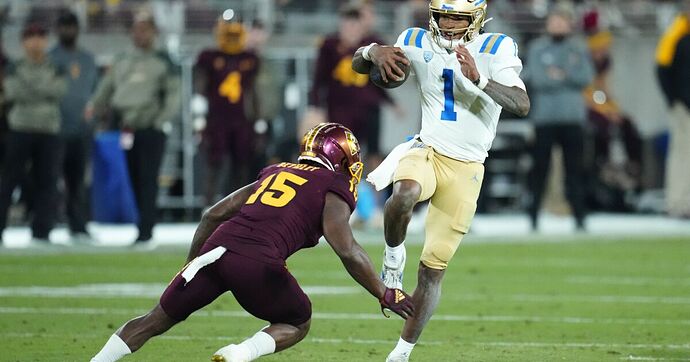 The path still remains clear for both USC and UCLA for the College Football Playoff as the committee ranked them Nos. 8 and 12 this week.

“Snub”?? Who is UCLA better than above them in the polls?
Love these kinds of sentences, too:

Of course, if UCLA beats USC, it is likely to vault right into that top eight and position itself for playoff semifinal contention with a win in the Pac-12 championship game.

Yes, teams need to win every game (and if not, need a bunch of other teams to lose) in order to vault into the CFP picture. And, it helps to self-schedule some impressive team from out-of-conference. So, yes, UCLA needs to beat USC and stop worrying (if they are feeling “snubbed” – columnist’s words not theirs) about the freaking polls and rankings.
That is what the GoA rankings are for.

I guess they don’t need to worry about that anymore? Win or lose this week UCLA is not getting in the top 10. Best chance now for the PAC 12 is for USC to win out, Utah to win out and USC soundly defeat Utah in their rematch in the PAC12 championship game.

Best chance now for the PAC 12 is for USC to win out, Utah to win out and USC soundly defeat Utah in their rematch in the PAC12 championship game.

And a bunch of losses elsewhere.
A win over ND might make things better, but it would have to be as impressive as tOSU’s win was (IMO).

TCU with a crazy finish: mad scramble on 4th down with no TO to get the FG off as time expired

IL is making it interesting vs Michigan. If IL can put together a sustained drive now they win

Purdue had a pick 6 called back for excessive high stepping. LOL.

I was expecting some waist-level high steps with that call, but they didn’t even reach knee-level. Also, there was an opposing player nearby that could have dove for his ankles.

IL is making it interesting vs Michigan. If IL can put together a sustained drive now they win

I think Illinois has shown that the glass slippers don’t flippin’ fit. Remember when we had dreams of playing a bowl game in January?

I saw these 2 graphics during the USC/UCLA game. Interesting breakdown. They were talking about how the PAC12 was so tough that they never managed to have any undefeated teams and that was why they had not been represented as well in the CFP. 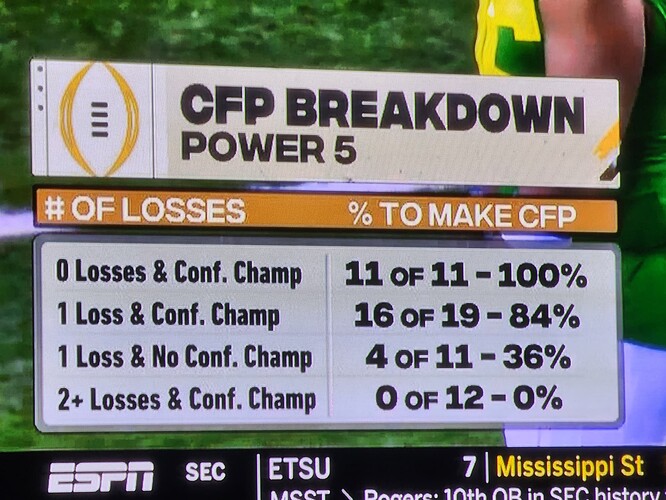 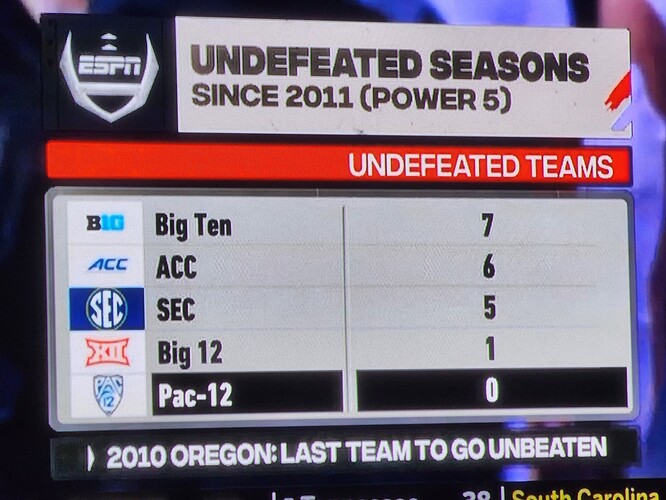 Um, who’s the guy in the green jersey behind that graphic?

Yeah, there WERE times when the Pac12 was so tough that no team went unscathed. 10-20 years ago, maybe.
It helps to see what teams those “tough teams” beat out-of-conference. Without that info, just blowing smoke.
The conference does have parity, that’s for sure. And, perhaps, officials who don’t call enough holding penalties, which increases scoring and increases the variances in scores of each team playing.

Yeah, Ore/Ut. I watched both of those though delayed so even here it was pretty late.

My problem with looking at the more recent PAC12 champions, their losses came often not against the good PAC12 teams but the middle to bottom.

But the first graphic shows that your method of projection is pretty spot on.

But the first graphic shows that your method of projection is pretty spot on.

Time for an update.

Moved possible Once-Beaten Pac12 Champ up, since common opponent ND will have beaten Clem but lost to USC. Also, if USC plays UU again and beats them thoroughly (as A321 already noted), they might wipe out their earlier loss due to alleged shitty calls, thus be “undefeated.”

I don’t see LSU getting in without a thorough explanation of their trouncing by UTenn. (The one-point loss against FSU in the first week smells of flukester.)
And UTenn with that trouncing by U of other SC.
But, CFP committee seems to be ignoring these simple facts.

But, I can certainly see the SEC officials effecting an upset so that two SEC teams are in the playoffs.

Wow, 4th quarter of Michigan - tOSU has been bonkers.