I know it’s a little early for this (not March yet), but top two teams at it tonight in Vegas. I might actually watch this.

I’m going with Gonzaga by 20. I think UCLA might be a little overrated and I don’t think Gonzaga is overrated. We will see

Right now, Gonzaga by 20 looks like a great call.

Was 20 points 12 minutes into the game. Zags looks like the real deal

Originally supposed to be OSU v KY and UCLA v UNC in las vegas tomorrow.
Both OSU and UCLA have cancelled due to covid protocols, so it will instead be KY v UNC at 3:30est.
For anyone tuning in and being totally confused.

Last year they went 2 -22 and their only two wins were against very very bad opponents (Jackson State (MS) and Arkansas-Pine Bluff.)

It’s got a new coach and a completely re-made team, with 6(found out its 6 not 5) transfers and a freshman PG running the floor. That’s a big freakin’ change in 9 months time since last March.

Quite a few college games seem to be being affected by COVID.

I found that ironic since Hawaii has some of the most rigorous requirements for getting into the state and they teams may be the vectors. (Stanford had played Hawaii earlier in the basketball tourney).

Did no one see the Michigan/Wisconsin post game dust-up? 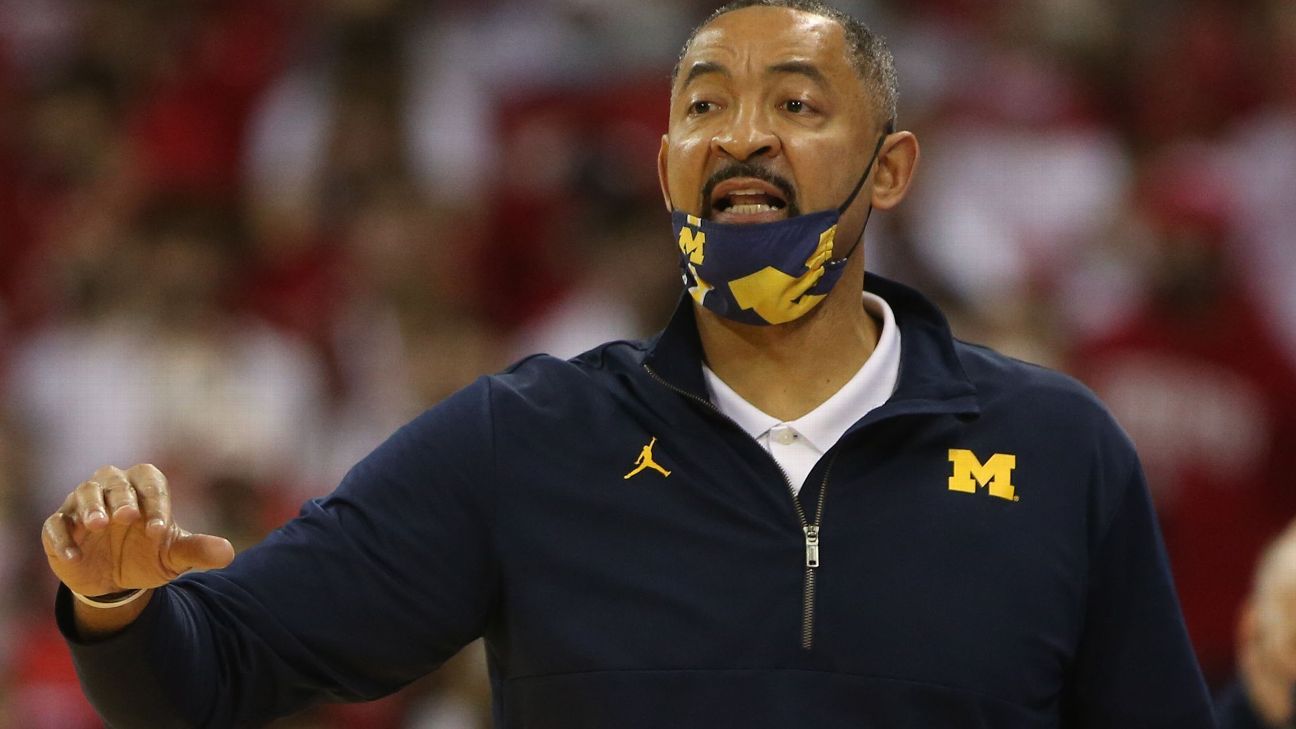 Michigan men's basketball coach Juwan Howard, who took a swing at a Wisconsin coach after the Wolverines' loss to the Badgers Sunday, was suspended Monday for the rest of the regular season, sources confirmed to ESPN's Adam Rittenberg and Jeff...

So ultimately, Howard gets a 5 game (remainder of the regular season), suspension with a fine for an open handed slap to the side of the head with the beginning and ending of the motion having a closed fist.

I’m much more surprised with simple 1 game suspensions for the players who were clearly swung their closed fists and other people. I didn’t examine clearly to see whether they connected with anything.

But Howard’s initial explanation about having hands placed on him doesn’t seem to hold water because he was fully removed from the situation where hands were placed on him by people from WI and was 2 to 3 rows of people back from the WI coaches/players when he came back into the fray and jumped over his own coaches/players to smack an opposing coach.

It seems he has an anger and control issues that need to be addressed or this is almost certain to happen again.

It seems he has an anger and control issues that need to be addressed or this is almost certain to happen again.

Oh, you don’t call time out on my team with a big lead and your reserves playing!!! Even if they’re playing poorly and can’t get the ball past the half-court line! And, since one-and-done is still a thing this might be your starting lineup next year!
What an ego-bruised manly-man.

Yeah, don’t be calling timeout with 15 seconds on the clock and a big lead with all you walk-ons on the court even though I have my starting 5 still in pressing full court.

Unfortunately, the WI coach owed no explanation for why he called the timeout and should have just let Howard act like the a$$hat he is.

Unfortunately, the WI coach owed no explanation for why he called the timeout and should have just let Howard act like the a$$hat he is.

Yeah, but he got a slap in the face for it. I mean, that is a long game he’s playing, getting Howard mad at him for several years.

Game might be more interesting to watch if it was “first to X points, win by two.”
Downside is that it might be a lot longer OR shorter, though. Harder for TV to schedule.

the unwritten rules rise again! the press down 15 at that point was a dick move. not sure why howard acted like such a moron, but he did.

I’m an Illinois fan. I root for all Big 10 teams though, except for Michigan. I hate Michigan. My 2nd favorite team is whoever is playing Michigan. So my opinion comes with a grain of salt.

Juwan Howard ought to be fired, not suspended. I watched the game, I saw the kerfuffle. He is a d!ck. If you put on a full court press when the game’s outcome is already decided, then don’t be surprised or offended when your opponents call a time out in a jam on the 10 second clock.

Howard’s post game comments also deserved more discipline on top of the discipline for a thrown punch. Don’t try to argue that you were in fear for your safety from Coach Gard, who is a marshmallow that’s 2 feet shorter than you.

Juwan Howard ought to be fired, not suspended.

Not during Black History Month!!!

Yeah, instead of a “let’s just rollover and get this game over with,” both coaches used it as a practice session, which IMO is a very good use of the time.

both coaches used it as a practice session, which IMO is a very good use of the time.

100% agree. why one of the coaches doing that failed to recognize it as good for both to do it is for him to answer.

I didn’t see the game but the replay that was shown seemed to show them trying to get the ball in after a basket maybe? And they were having difficulty and called the time out.