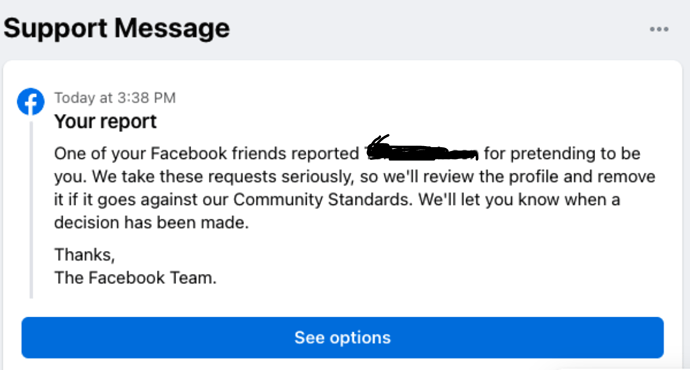 Seems unlikely that there’s any truth to this. In fact, I reported “John Doe” (the crossed out name) for pretending to be “John Doe” (the same name, one of my facebook friends, with the new “John Doe” using an extremely similar profile pic (maybe a prior actual profile pic of my friend). Not a very close friend, one I knew in high school 50 years ago. Anyway, I got a friend invite from the new id today, and, somewhat puzzled, accepted it without checking even though I thought we were already friends. Soon thereafter I got messengered by him. Turned out to be the PCH Megabucks scam. So I reported it to FB as impersonation (and unfriended him and blocked him). Unfortunately that report gave me no way in the same report to comment on the scamming. But I got this explanation of “Your report” from them, which to me does not resemble my actual report. (Nor was there any way to explain why I thought it was impersonation, such as mentioning the profile picture is the original “John Doe” or the fact that he was sending friend invites to at least one friend of the original “John Doe”)

Seems to me that it was sent to John Doe, but since you reported it, you were “cc’d” (i.e., included on the message).

Still seems to me that it should not have been labeled “Your report” if that “your” refers to the friend and “you” is someone else. That said, your (VA’s not JD’s) interpretation is clearly right, since this is the notification by messenger that I had a report to read